Canada Qualifies for Second Round at World Cup Qualifiers

Canada has qualified for the second round during the Americas World Cup qualifiers after a 99-69 win over the US Virgin Islands on Sunday at TD Place in Ottawa.

In celebration of Canada Day, the Canadian national basketball team (5-1) showed up one more time to take care of business as they overshadowed the US Virgin Islands (2-4) by 30 points.

“It’s so tough to play away, that you better take care of business at home”, says Canada head coach and the NBA Charlotte Hornets assistant coach Jay Triano

The team gave their best effort, putting on a show to fight for the national pride and qualify for the second round as the game qualifiers proceed for the World Cup in China in 2019.

“Play the right way, that was the message for them,” said Triano.

The chemistry surrounding the Canadian bleacher was getting smoother and more fluid as this game marked their fourth time playing together. 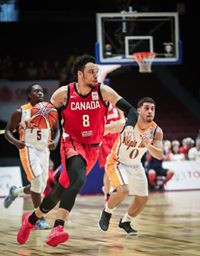 Coach Triano managed to get a little bit of everything on this bench. The Canadian national team had players from the NBA like the Miami Heat’s Kelly Olynyk, the Dallas Mavericks Dwight Powell and the Orlando Magic’s Khem Birch, a Montreal native.

Alongside these NBA stars were overseas players such as Melvin Ejim, who can be seen with the UNICS in Kazan, Russia. Brothers Thomas and Philip Scrubb also play overseas, Thomas in Italy with Scandone Avelino, and Philipp in Germany with the Frankfurt Skyliners. Additionally, Triano mixed in some college superstars in the form of R.J Barrett who has committed to Duke for the 2019 class and Andrew Nembphard who has done the same for Florida State University.

“It means something, that guys like Corey [Joseph] and Kelly [Olnyk] are coming back here and playing for the national team,” commented Duke’s R.J Barrett, a likely first round pick for the NBA draft class of 2019.

“I like where we are, the other group playing for us did a really good spot, playing here and winning puts us in a good spot, we got another home game in September, we gotta make sure that those count as well,” said coach Triano.

Sunday’s game tipped off slow but the roster picked up during the second half. Kelly Olynyk and Philip Scrubb were the top performers in this game, scoring 28 points combined while Melvin Ejim and Corey Joseph rebounded the ball 13 times.

“Our depth is a big factor for us, home court is a big advantage for us. We’ve got so many guys playing all windows for us, these are all the guys making all the kind of work. We play young International teams. It’s the world championships and these are big games,” said Triano.

“We love to play for our country,” said Canada’s Corey Joseph. “When we start to come together the showing up is contagious.”

The second round of the Americas qualifiers cuts the pool of teams in half, with two groups instead of four: Group E and Group F. Canada currently holds the third position behind Brazil and Venezuela in Group F.

Canada will be hosting yet another home game in September as part of the second round.
Triano said that he doesn’t know who will be joining the Canadian squad come September, noting that it will all depend on a multitude of factors, including player performances in summer leagues.