An unforeseen, but not unwarranted, invitation gave McGill Basketball star Alex Kiss-Rusk the chance to continue to show just how good she really is, even after her season ended.

Kiss-Rusk’s year was defined by success. She was named Réseau du sport étudiant du Québec defensive player of the year, earned a spot on the RSEQ first all-star team and finished by leading the Martlets to their first U Sports championship.

The 6’4”centre followed this stellar performance by securing herself an invitation to Canada Basketball’s national assessment camp in Edmonton as well as a spot on the national team for an exhibition tournament in China.

“It was really unexpected, so I was really grateful to be there” said Kiss-Rusk who was one of only 33 athletes invited to the camp in May.

Kiss-Rusk was offered an invitation after a strong showing at the national championships and at the open identification camp in Toronto—the scouting event that allows Canada Basketball to identify who they want to send to the selection camp in Edmonton.

While Kiss-Rusk may have been surprised by this, those around her certainly are not. Martlets head coach Ryan Thorne knows that she created this opportunity for herself.

“I’m pretty sure what [Canada Basketball] saw was a talented post player, someone that they can invest in long term,” says Thorne.

That certainly seems to be true, as Kiss-Rusk also won a spot on the phase two roster of the camp, sending her to play several games overseas with the national team.

Annette Kiss, Kiss-Rusk’s mother and a former McGill basketball player herself, sees no reason to be surprised by these invitations.

“After her performance at the National Championships, my only surprise was that she was not invited outright and had to go through an open tryout in Toronto,” she said.

While the invitation was cause for celebration, the work did not end there for Kiss-Rusk, who went into the camp trying to impress Team Canada’s coaches and executives. The camp’s purpose was to assess the pool of athletes that Canada has available for matches potentially leading up to qualifying for the Tokyo Olympics in 2020. This meant days of grueling practices, meetings, and an exclusive focus on her game.

“The purpose of being there is just for that team so your entire day is just about that,” said Kiss-Rusk. “You really get to put 100 per cent of your focus on that team and on basketball.” 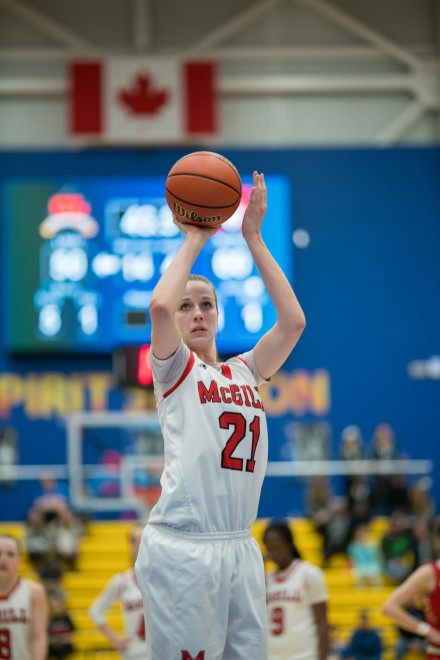 “Its really fun to be in an environment where everyone’s pushing each other and everyone’s doing everything they can to make the team better,” says Kiss-Rusk.

That kind of attitude is exactly why her coach sees the Martlets’ star as such an effective leader.

“[Kiss-Rusk] brings confidence and leadership to the group,” said Thorne, who has coached Kiss-Rusk for four seasons. “[She] leads by example, so when [players] see her working hard to get better, they have no choice but to do the same.”

In Edmonton, Kiss-Rusk was surrounded by players from U Sports programs, American NCAA programs, the WNBA, and even leagues on different continents. She took this as a unique learning experience and as a chance to learn from more experienced players.

“You learn so much being around players like that and coaches like that. It’s really a great opportunity […] to take things back with me,” says Kiss-Rusk who is planning on bringing the team Canada culture and attitude home with her to McGill.

“A lot of the girls there play overseas and some of them play in the WNBA and you kind of learn about their lifestyle and what it takes to get to that level and to perform at that level.”

Her time at this camp is an excellent step in Kiss-Rusk’s development as a player. Kiss said that the recognition is invaluable in terms of playing for Canada or playing pro in future years, noting the opportunity that a spot at this camp can provide.

Kiss-Rusk continues to rack up valuable experience with an invite to phase two of team Canada’s camp, starting June 19 in Edmonton. Kiss-Rusk earned herself a spot as one of only 15 athletes, and the only Canadian U-sports player, named to the phase two team. She was not immediately available for comment on being named to phase two

After a week of phase two camp, Kiss-Rusk and the team will heading to China. There they will play in a six-game exhibition tournament. Canada basketball will be closely evaluating Kiss-Rusk and her teammates throughout the tournament.

“This second phase of training is focused on developing our athletes […] the exhibition tournament in China will help determine what we need to build upon.” says team Canada head coach Lisa Thomaidis.

Aside from her team Canada activities, Kiss-Rusk is preparing for her next season with the Martlets. After a season filled with personal accolades, a national championship and now an invitation to Canada Basketball’s assessment camp, she prepares herself for the long grind of another year on the hardwood, as well as in the classroom. Kiss-Rusk would not have it any other way.

“The reward is so great that you don’t even notice all the things that you’re sacrificing for it. Especially when you end a season the way we ended it last year. It’s all very much worth it.”

Some may call improving on this outstanding season impossible, but Kiss knows that her daughter can do even more. “Alex’s progress has been a steady climb throughout her basketball career. I think the best is yet to come.”