On the eve of Internationals Women’s Day, the line outside Club Soda stretched down the sidewalk on St. Laurent Blvd.

About 850 attendees were ready to come together and listen to Consensus, a benefit honouring survivors of sexual violence—most with yellow felt hearts pinned to their chests, representing their dedication to the cause.

Consensus’ other supporters, Sans oui, c’est non!, the Fédération étudiante collégiale du Québec, and the Union étudiante du Québec, want to create social change with the campaign. Its message was highlighted multiple times during the benefit show: Consent for everyone.

Well-known area musicians, such as Safia Nolin, Karim Ouellet, La Bronze, and Ines Talbi, along with survivors of sexual violence were invited to speak up about consent and perform.

“There is so much invisible suffering in this room,” organizer and sexual assault survivor Léa Clermont-Dion told the crowd. “But also incredible resistance.” 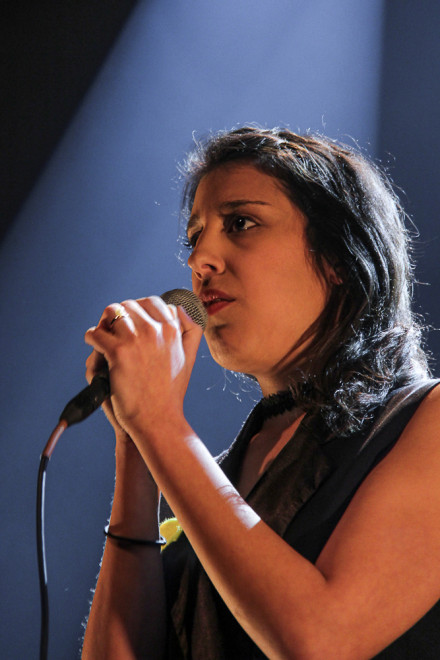 Ines Talbi was one of the performers on March 7. Photo Laurence Brisson Dubreuil

Breaking the silence is an important step and one that, according to Clermont-Dion, needs to be followed by concrete political and social actions.

Nadia Essadiqi, better known by her artist name La Bronze, shared how beyond the number of people in attendance and the amount of money raised, this event is a reminder to every survivor that their identity is not defined by their abuse.

“I believe it’s essential to remind ourselves that our power lies within ourselves,” said La Bronze in an interview. “That we are the leaders of our lives and that our purity is always intact.”

Men Need to Stand Up Too

“You say that you are lost and I want to tell you that it is up to you to find your way,” said Elisapie Isaac, an Inuk singer and songwriter, who addressed the men that aren’t sure where to stand in the movement.

The importance of male involvement in the movement was also highlighted at the Consensus campaign launch earlier that day. Gabrielle Bouchard, president of the Fédération des femmes du Québec, explained how we have to recognize that collectively we all have something to change.

Women’s rights activist and wife of current Canadian Prime Minister, Sophie Grégoire Trudeau, surprised those in attendance with a speech wherein she emphasized the importance of education in achieving a society where women would be safe.

“We will not let society’s narrow idea of masculinity mold our men,” said Grégoire Trudeau. “Not when it hurts women and men alike.”