A protest organized by the most militant of Quebec’s student federations, the Association pour une solidarité syndicale étudiante, drew thousands of demonstrators into the streets of downtown Montreal on Thursday to denounce budget cuts to various government programs.

“This mania [in search] of zero deficit spares no public service in either Quebec or Canada,” said ASSÉ co-spokesperson Justin Arcand. “Governments tell us that they don’t have a choice. However, austerity budgets are not fate, but an ideological choice.”

Montreal police made six arrests during the protest. Two people were injured, including a man in his 50s who was hurt by a projectile, according to the Service de police de la Ville de Montréal. The incident occurred as police charged forward to break up the crowd.

ASSÉ said roughly 50,000 students were on strike Thursday. The crowd—estimated by organizers to be 15,000-strong—left Place Émilie-Gamelin shortly after 2 p.m.

The protesters first marched north along Berri St. before winding their way south-west through downtown to Victoria Square. While many of the demonstrators stopped there, others marched back through downtown, at times weaving between rush-hour traffic. Riot police dispersed the crowd near the corner of Sherbrooke St. and St. Urbain St. shortly after 5 p.m. 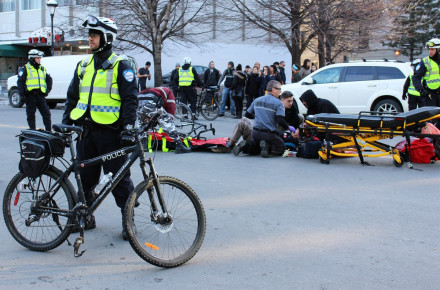 A man in his 50s was injured by a projectile as police charged forward to break up the crowd on Sherbrooke St. Photo Michael Wrobel

Two student associations at Concordia—the School of Community and Public Affairs Students’ Association and the Fine Arts Student Alliance—are members of ASSÉ, whereas the Concordia Student Union is a member of the Fédération étudiante universitaire du Québec. Still, several newly-elected CSU executives were present at the protest, including president-elect Benjamin Prunty.

Prunty told The Link the executives were not there as official representatives of the union, but as members of the SCPASA and students concerned about austerity measures.

A few CSU councillors also participated in the demonstration.

“[A protest] like this, where you have a huge mass of people all together to […] protest austerity measures which are prevalent at every single level of government, is something that I, of course, want to be a part of,” said Lucinda Marshall-Kiparissis, who was elected a councillor for the Faculty of Arts and Science in last week’s union elections.

“It sends a message and it builds a sense of solidarity,” she added.

“ASSÉ had been promoting [the protest] for a while […] and I agree with the messages, so I felt that I had to be a body in the street to show support, show numbers and contribute to the mobilization against these political issues,” said John Talbot, who was also elected an arts and science councillor.

Geoff Graham, an independent student at Concordia, said he came out to the protest in order to denounce “social inequality, both globally and locally.”

“We are rich nations, that’s for sure, but even amongst our rich nations, there’s incredible divides, so we have little power to fix global problems because we have to deal with our daily struggles,” he said.

Another Concordia student, Christale Terris, said she decided to attend the protest because she is “against austerity, against cuts to education, to the environment, to social spending.”

“I think the government that we have right now is going in the wrong direction,” she said. “We can’t completely guarantee that the next [provincial] government is going to go in the right direction either. I think that we’re in a really precarious time and it’s time to take direct action.”

The protest was reminiscent of the 2012 student strikes, with many demonstrators donning the red squares that became symbols of the protest movement. 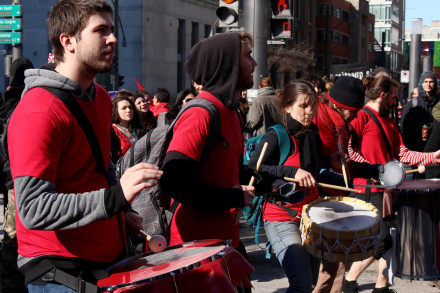 A marching band performs at the protest near Victoria Square. Photo Michael Wrobel

Although the protest was planned months ago, before the provincial election was called, it inevitably took on an electoral tone. Some protesters sported Québec solidaire buttons on their jackets and several candidates for the Green Party of Quebec chose to participate in the protest.

“A lot of the goals put forward by the organizers of this protest correspond very much to the message that the Green Party has been bringing in the election,” said Green Party leader Alex Tyrrell, who attended the protest.

“It just shows how volatile the political climate is in Quebec, that you can have these kinds of protests four days before an election and that even though the protest seemed peaceful, as far as I saw, it was met with an extremely heavy police response,” he added.

“I saw somebody be pushed to the ground. An older man had to be taken out on a stretcher—he was bleeding from his head—for absolutely no reason.”

Tyrrell said the Green Party is opposed to any laws that curb the right to protest.

“I think that the police have been applying unconstitutional rules for the past two years where something will happen, like one window will be broken, and they’ll use that as an excuse to arrest 350 people and they’re violent while they make the arrests,” he said.

Some protesters suggested electoral politics won’t change the fact that various levels of government are seeking to cut spending.

“When it comes to austerity, there’s a lot of disenchantment with ‘politics as usual,’” said Marshall-Kiparissis. “It doesn’t matter who gets in. These policies will likely continue, and it’s nice to step back and see that there are other people who recognize that.”