A Review of the World Press Photo Contest, in Montreal Until Oct. 1

Burhan Ozbilici, an Associated Press photographer, was struck with admiration by the Russian ambassador, who was inaugurating a photo exhibition a mere six metres in front of him. Moments later the man Ozbilici revered was shot in the back by an off duty police officer.

Andrei Karlov, a Russian ambassador to Turkey, was attacked in Ankara, Turkey. The event was seen as a backlash against Russian military involvement in the Syrian conflict.

Ozbilici immediately realized this was a serious and historic situation. “I realized it wasn’t just anyone on the floor.” Yet he stayed calm and captured the unpredictable situation as it unfolded.

“As a journalist I did my work,” he said. Ozbilici snapped pictures of the gunman, raising his weapon while he shouted “don’t forget Aleppo”. Then he turned his back and photographed the terrified crowd. When special forces finally came, Ozbilici was the last one to leave the room, taking one last photograph as he was escorted out.

This series of photographs led Ozbilici to win the World Press Photo of the Year 2017.

Based in Amsterdam, the World Press Photo Contest represents the most prestigious press photography contest internationally since it’s creation in 1955. This year the focus of the contest was the importance of freedom of expression and freedom of the press.

Ozbilici’s striking storytelling can be found along with 152 prizewinning photographs at the Bonsecour Market for the 12th edition of the World Press Photo contest exhibition in Montreal.

“Our goal is for these photos to be seen by as many people as possible,” said Laurens Korteweg, the exposition director from Amsterdam. This goal can at times be challenging as the organization refuses to censor any of their photographs.

While walking through the exhibition, it is easy to understand what has stopped certain countries from displaying the collection.

Images of daily life in Syria, that have haunted newspaper covers and television newscasts in the past year, come to life in Abd Doumany’s work. This 26-year-old Syrian freelance photographer used his work in hopes of contributing to a better situation for his country. “He is the whole message of the World Press Photo,” said Korteweg.

A corpse wearing a red life jacket is seen floating in the endless water of the Mediterranean Sea. This shocking and powerful photograph by British photojournalist Mathieu Willcocks shows the fate of about 4,000 individuals in 2016 alone, according to the UN refugee agency.

The news in 2016 was also shaped by the drug war in the Philippines, which was covered by two prize winning photographers; Australian Daniel Berehulak and Noel Celis, a photojournalist from the Philippines. Korteweg gave prestige to both contestants but noted that “Noel is the story,” as Celis lives in the conflict. This deeper knowledge of the situation is visible in his work.

On a lighter note, photographers have captured the daily life of people from all over the world. From the mock military coup festival in Spain, where people throw eggs and flour on the opposing team, captured by Antonio Gibotta, to the Trans Rugby team from Toronto that won the 1st prize for the sports category by Giovanni Capriotti.

The goal of the World Press Photo Contest is to recognize photographers but also to provoke a reaction from the worldly audience.

“You see it, you know about it, now what are you going to do?,” said Korteweg. 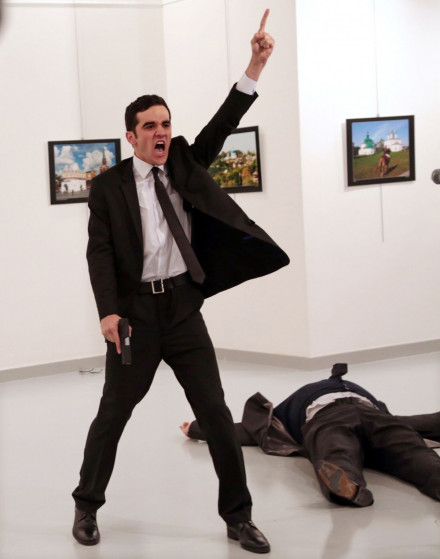 On the second floor of the Bonsecour Market are other exhibits, including “Project Flash Forward” by Amina Jalabi. This Concordia Art Education Master’s student has worked all year on a photography project with Syrian teenagers. Themes of roads and travel were found again and again in their work, as well as water, architecture and the changing seasons. All captured on donated or lent cameras, their work will be open to the public for the duration of the World Press Photo exhibition.

Jalabi used a method called “photovoice” that lets a group address issues by capturing their surroundings and their lives. As a Canadian from Syrian origin, she mixed her major with a cause that is important to her.

“I was thinking, how can Syrians talk about themselves?” she said, seeing only how local media covered Syrians arrival to Montreal.

She is trying, through her work with young Syrians, to shatter the ideas that are often associated with refugees. Jalabi wanted to give them power.

Jalabi worked in partnership with Jasmine Van Deventer, from Singa Quebec, an organization that works on social inclusion. This platform, based on mutual aid, aims to make refugees feel more at home in Quebec by connecting them with their host society.

The teenagers, aged 13 to 19, were able to discover the city and create friendships between themselves.

“It’s interesting to see to which extent talent was discovered,” said Van Deventer.

“I can see how excited they are, for them to be seen as Montreal artists, to challenge that view of refugees,” said Jalabi. “They are going to be so proud.”

These students got a letter of recognition from the Fine Arts faculty at Concordia, their first recognition here in Canada.

All the exhibitions displayed at the Bonsecour Market will be open from daily from 10 a.m to 10 p.m Sunday, Monday, Tuesday and Wednesdays from Aug. 30 to Oct. 1 and 10 a.m. to midnight on Thursdays, Fridays and Saturdays. The admission price for students is 10$ and an online gallery is visable at http://www.worldpressphoto.org/collection/photo/2017.