Barbecue smoke smothered the air outside of Taz skatepark on Sept. 9 as hundreds of fans huddled in line to see the Dime Glory Challenge.

This article has been updated.

The sound of an oversized garage door rising barreled a wave of excitement through the crowd.

A massive poster for the main event towered above, posing challenger Tiago Lemos against two-year reigning champ Wade DesArmo. As the floodgates opened, the atmosphere erupted in hype for Brazil versus Canada, in a world-championship game of skate.

The crowd filled the sides of the course and bleachers as pro skateboarders were led out by the legendary, American-born, Danny Way.
A Dime logo placed on a wall in the background exploded as Rob “Sluggo” Boyce flew in on a board and proceeding to rip his shirt like the Hulk of Red Dragon Skateboards.

Speed shades are handed out to the entire crowd before the infamous Speed Challenge, during which ahletes must attempt to land flip tricks while moving as fast as possible.

Skaters must trick with style over DesArmo’s switch pop shove-it couch, imported from Vancouver. Adrian Del Campo of Spain took the cake in this challenge.

After a short break the crowd sardined back into Taz for the main event—the world championship game of S.K.A.T.E. In this classic game, two skaters go trick for trick just like a game of H.O.R.S.E—you get a letter for every missed trick that the opponent set. The hype for this match-up is astronomical in the skate world.

Two-time reigning champ DesArmo, 34, had a promo video of him pulling up in a Ferrari, hop-out, 360 flip and then take off in a helicopter.
Lemos, 26, goes for humble vibes in his video, with 3-ft. pops and flip tricks at Park Lafontaine.

DesArmo explained that anyone who thinks this isn’t nerve wracking, should think about how it feels to try a kickflip in front of all these people.

“No one wants to miss a kickflip,” said DesArmo. 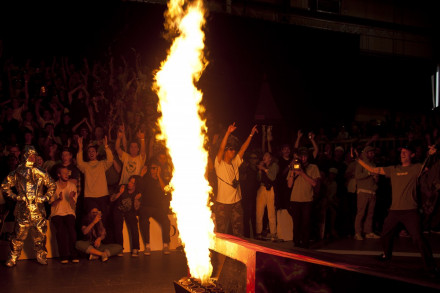 They went trick for trick until the two-time champ pulled away with a perfect game, taking his third belt and disappearing into the surrounding mob.

“Just to come out of Brazil and be here—we never thought about doing this,” Lemos enthused.

As DesArmo walked out after a crazy day in competition, he talked about the respect he had for Lemos, that whatever the score was, “It was just a blessing to share the stage with him.”

The Ottawa-native recalls travelling to Montreal for the first time at the age of 12. He and his friends made day trips to the city because it was closer than Toronto. His pro influences revolved around Tom Penny, Eric Koston, Ronnie Creager, Gino Iannucci, and Guy Mariano.

“I didn’t care what anybody else was doing, I compared myself to them and I wanted to be on that level,” recalled DesArmo.

When he decided to make a move in the skate scene, he re-located to Vancouver. “I didn’t want to move to Cali, I wanted to be Canadian,” he said.

“What they do for skateboarding here is second to none. They really look out for their community and I wish other places around the rest of Canada could do the same.”

Spending a substantial amount of time in California, he saw both sides and developped a different mentality.

“No one wants to miss a kickflip.” — Wade DesArmo

“I don’t want to say they take it for granted. It’s different coming from a place where you know it’s going to be 25 degrees every day, and sunny,” remarked DesArmo.

Here in Canada, we get about six months to skate. The first few months are typically spent relearning old tricks, the next two learning new ones, and the last month is about getting your footage.

In DesArmo’s words, “film what you learn and take it into next year. Then you sit back watch the hockey season, and play hockey with your boys.”

He doesn’t skate any other competitions, because to him this event isn’t a competition. Mid-conversation with DesArmo, Lemos and Yuri Facchini swung by to say what’s up.

“It’s people that you want to see skate, that you don’t get to see skate,” explained DesArmo, saying that he thinks Lemos will go on to win big in the coming year.

Lemos, originally from Campinas, Brazil, currently lives in Jaguariúna, Brazil located about an hour outside of Sao Paolo—famous for the Brazilian rodeo. He spends the other part of his time in Long Beach, California, where he chills with his friend Yuri Fachinni, 21, who is also Brazilian, from a town called Colombo. 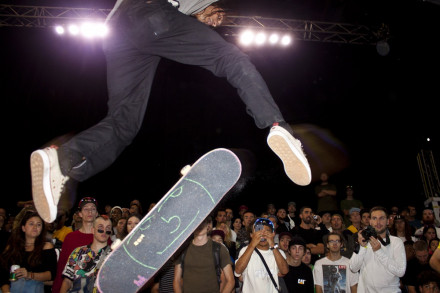 Skateboarder Evan Smith seen mid-air, doing a a triple flip during the “mystery challenge” at the Dime Glory Challenge at the Taz skatepark on Sept. 9, 2017.­­ Photo James Betz-Gray

Lemos was always smiling throughout the event, and said how excited he was to come back with more time and to live Montreal,

“That’s what makes this shit fun, nobody gives a fuck!” said Lemos.

The Brazilian prodigies knew what they were doing in Montreal that day, “We’ve got to support our family back home. This is the reason we’re doing this.”

DesArmos wanted people to know that those who were overconfident in his corner, have “probably never seen [Lemos] skate.”

“I don’t know how that’s even possible, the dude’s an animal,” said DesArmo.

He talked about Lemos’ trick execution, pop, and technique being the full package. “When the KO video came out in Brazil [Wade was] king!” Lemos said.

“I’m telling you man, this generation grew up on you, because you represent Brazil […] The way you skate, everything you do, that’s how Brazilians like it,” said Lemos.

DesArmo smiled at the possible skate adventures to come.

“That’s humbling man, that means more to me than you’ll ever know in your life,” said DesArmo.

As the pros sat back, shooting the shit as if all status blew away, DesArmo blurted out, “Why the fuck haven’t I been to Brazil? I’ve been trying to go out there for 10 years, Jesus Christ!”

The circle broke out in laughter for a moment until they realized he was serious, “Let’s make it happen,” assured Facchini. “Make it a homies trip,” added Lemos.
DesArmo assured that big things were in the works, a video part with Thrasher dropping within the next few months.

“Go down to Cali, skate with my man Lemos, skate with Facchini and skate with the boys. Keep it moving, keep skating, keep having fun,” said DesArmo. “That’s all it is, it’s not a competition.”