It was a warm fall day, yellow leaves coloured the floor below as mourners gathered in Trenholme Park in Notre-Dame-de-Grâce to pay their respects to Nicholas Gibbs.

On Sunday night a vigil was held in memory of Gibbs, who was fatally shot by Montreal police this August. He was 23 years-old.

In the months following, Gibbs’ family says Montreal police failed to take into account his mental health and deny he had any weapon during the confrontation with police before his death. Marlihan Lopez from Black Lives Matter Montreal attended the vigil and called for the police to be held accountable for their actions.

“It’s been made evident that police should not be the first respondents for situations of mental health crisis,” said Lopez. “Once again, we see how race and mental health intersect and render certain communities more vulnerable to police brutality.”

At Gibbs’ vigil hot beverages and soup were served by organizers of the vigil. After speeches were given, a march was held as mourners and the family walked towards where the shooting took place.

The march made its way onto Sherbrooke St. before turning on Montclair Ave. Walking downhill on Montclair Ave., chants of “No justice, no peace, fuck the police!” and “Black lives matter” echoed throughout the neighborhood, while police wearing bright yellow vests on bicycles watched from a distance.

When the march reached the train tracks by Maisonneuve Blvrd. a large white banner with red writing was hanging. The banner read “R.I.P. Nicholas Gibbs, killed by SPVM.”

Speeches were given at the end of the march, with the family recounting the hardships they’ve endured since August. When his uncle was shot, Jeremy expressed that he felt nobody cared about the situation, but seeing the support at his uncle’s vigil was a step in the right direction and he hopes it will incite change within the community.

“I’m seeing Black, white, Indigenous, all types of people together. This is how change starts, this is how we change our community,” said Jeremy. “This is how we prevent another family from going through what my family has to go through.”

“I’ve never seen people come together like this. This is the best thing I’ve ever seen come out of the city,” he continued. “Half of me is gone, when I wake up in morning, to when I go to bed, half of me is gone. I don’t feel like the same person, I don’t even know what I feel anymore,” Jeremy said.

A recording of Paulina Thorne, Gibbs’ sister from Barbados, was played at the vigil. She expressed that she wasn’t able to tell her brother goodbye, and never had a chance to hug him one last time. He will never to know his nephews and his great niece, she said.

“How dare you shoot him like his life didn’t matter? It may not have mattered to you, but it mattered to us,” Thorne said. “To the officers who shot him […] I will hope that you will never have to feel the pain of losing a loved one the way my brother was so unjustly killed. I hope you have restless nights knowing what you did.”

“Ask yourselves, were you just in killing my brother?” 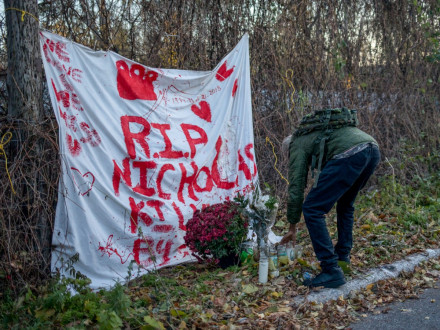 Jeremy Gibbs deposits a candle in front of a banner honoring his uncle, Nicholas Gibbs, during the vigil in Notre-Dame-de-Grace on Sunday November 4, 2018. Photo Maggie McCutcheon

In the week prior to the vigil, it was announced that the Gibbs family plans to sue the City of Montreal for over $1 million in moral damages and $100,000 in punitive damages. On Oct. 30, an eyewitness video of the shooting was also released online.

The video depicts three SPVM officers shouting at Gibbs in French. The altercation ended with Gibbs being shot five times—two of the shots were fired while Gibbs’ back was turned.

“It’s hard [to see] the way that our bodies are perceived as weapons. In my mind there is no excuse for having used deadly force on Nicholas Gibbs,” said Lopez. “The police should find better ways to de-escalate situations, and if they can’t than we should be questioning ourselves on the utility of the police.”

Not knowing her son had just been shot, Erma, Gibbs’ mother, said she saw police driving down the street. On the same night, Erma had recently saw her son. He was angry and frustrated, she said, and left her apartment to cool down.

“I didn’t see him with a weapon, all he had was my cell phone in his pocket,” said Erma. “The police are dangerous, they don’t care because they know they have people there to protect them and lie for them.”

Jeremy said that the cop who “murdered him,” should go to jail.

“They can kill someone and go chill with their family and chill with their kids. His kids will never have a father again. That there should speak for itself […] they need to stop dehumanizing people.”