“We believe you,” chanted several hundred people gathered at Place des Arts last night, in hopes that the Indigenous women in Val-d’Or who said police officers abused them for years would hear.

On Nov. 18, four representatives of the crown’s office released the news that almost every single one of the 37 charges against Sûreté du Québec officers were dropped. The announcement came to the Indigenous community in Val-d’Or after a tense and difficult year of waiting, but it was not the response they hoped for.

“We’re here to denounce the abuse that the women in Val d’Or received at that hands of the police officers, and to demand a public inquiry so that true justice can take place,” said Alana Boileau, a representative from Quebec Native Montreal, one of the organizers of the event.

The vigil was the result of a collaboration between the Native Women’s Shelter, Quebec Native Women, Amnesty International and Idle No More Quebec. With organizers intent on raising awareness about the recent news in Val d’Or, participants gathered around the stairs in a show of solidarity.

“An event like this allows people to see, in numbers, the support that the women have,” Boileau said. “It’s powerful and it’s comforting for those of us here, to feel like we’re fighting together.”

“I am a survivor of sexual assault,” disclosed Pamela Warden who works at the Native Women’s Shelter. “We don’t want to report because we’re afraid of not being heard. We don’t get a day in court and we don’t have justice,” she said.

The vigil invited the Buffalo Hat Singers to open the event, and as the men beat the drums and sang, participants held up signs, lit candles and burned sage. 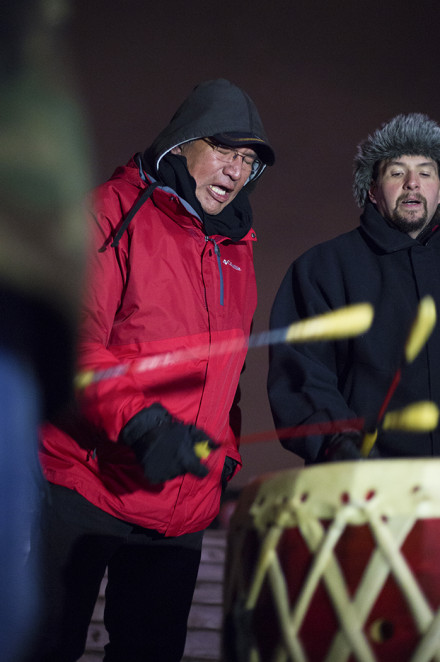 “This is discouraging. I love coming out and singing for people, but today is more sombre,” said Dayna Danger, a member of the Indigenous women’s drum group Odaya, before singing a White Bear song dedicated to all Indigenous women.

Danger passed the microphone to Ellen Gabriel, a prominent Mohawk activist and educator from Kahnawake who is known for having been a spokesperson during the Oka Crisis in 1990. Gabriel has remained active in Indigenous rights issues across the country.

“We need to tell Premiere Couillard, Mr. Trudeau and the police that justice is for everybody!” she said. “An independent inquiry is needed and maybe is not good enough.”

Gabriel called the crowd’s attention to the suffering of the women in Val-d’Or, in hopes that they would be able to see the amount of people gathered in their name.

“I don’t know what else we can say and do, other than pressure the government, and tell them that they must uphold the rule of law,” she said.

In 2004, Amnesty International recognized colonialism as one of the root causes of the crisis of missing and murdered Indigenous women in Canada, Gabriel said. “The police are practicing and implementing colonial laws and racial discrimination.”

Philippe Meilleur, Director of Native Montreal, a service provider to native women in Val-d’Or and has expressed fear in his ability to offer support in the face of such grave disappointment. He called on those present at the vigil to take the issue home and refuse to remain silent.

“We need you to go to your families, colleagues, friends and all the ones you sometimes don’t speak to because you’re afraid to talk about these issues,” he said. “This Christmas, talk about our women’s issues.”

Wayne Robinson, director of Human Affairs at Native Montreal, said in an interview that he is concerned about the judiciary choosing not to process the SQ’s 37 charges. “We need to make sure that the public knows that this happened—that the women came forward, the police investigated and the judiciary said no.”

Robinson is also worried about the public’s relationship and attitude towards Indigenous people as well, one that he says may have contributed to the final court decision.

After the allegations were revealed last fall, six officers were suspended with pay and a few others moved to different positions. Members of the SQ organized themselves to wear bracelets in a show of solidarity for one another, an act of comradery that horrified Robinson.

“We’re not talking about police who did some minor incident,” he said. “When the public allows people to get away with that, it shows we’re not too far from the dehumanization that brought us here.”

Dehumanization evident in the residential school system, the excessive taking of native children from their families in the sixties, and the child-welfare system, he explained. “We need to tackle those ideas that natives are less than human and ensure we treat native people as human.”