Theatre Review: Escaping from the Inner Turmoil in Vic and Flo Saw a Bear

Vic + Flo ont vu un ours is a dark, romantic movie about an ex-con couple who try to turn a glum situation into a warm and liveable space.

The film, made by Quebec filmmaker Denis Côté, debuted in 2013 and was recently translated and adapted for English theatre by award-winning director Michael Mackenzie.

Vic, portrayed by actress Julie Tamiko Manning, is fresh out of jail and fresh out of options. She goes to live in her uncle’s abandoned sugar shack in the Quebec wilderness, only to have an unexpected visit. Flo, played by Natalie Liconti, is her lover from behind bars. She comes to pursue a liberated life with Vic.

Their first taste of freedom is bitter, though, as they often deal with feelings of jealousy, secrecy, and regular visits from Vic’s clean-cut parole officer. Vic is desperate to make things with Flo work, but their cabin is just a another type of confinement for Flo, who just wants out as soon as possible.

The scenes in the show are concentrated around the yard of the sugar shack in the woods. Storage containers are stacked to the ceiling to resemble trees, presenting a cute and simplistic set design. The character list was reduced down to a dynamic team of four actors who adeptly portrayed an individual anguish.

Tamiko Manning puts on a stunning performance as Vic, perfectly capturing the personality and mannerisms of a jaded ex-convict who is terrified of the outside world and who loves her partner. 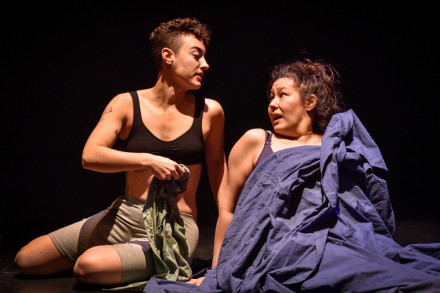 The play uncovers a deep divide between human isolation and intimacy with dialogue and stage direction. Courtesy Maxime Côté

The women share a certain chemistry onstage, but they express almost no intimacy throughout the play. There is one brief scene where they shed their clothes behind a hanging sheet, but otherwise there is no kissing, cuddling, or love making.

The overall tone of the play was very gloomy as it incorporates some elements of horror. Especially when Flo’s former accomplice, Jackie, starts lurking around the property. She’s obviously out for revenge, but it’s unclear what Flo did to bring out this behaviour.

Leslie Baker’s portrayal of Jackie is clever and eerie; her character is clearly tormented, but it isn’t clear until the end of the performance just how far she’ll go to get even with Flo. The build-up of her villainy is playfully contrived and almost satirical. The downside is that when the gruesome finale takes place, the audience has had a step-by-step guide to the unfolding drama.

Vic and Flo Saw a Bear uncovers a deep divide between human isolation and intimacy. It explores a queer relationship beyond the confines of characterization and sexuality. The characters in this show are not easy to define, and the audience must pay careful attention to understand what motivates their behaviours.