The concept is fresh and alluring—a play with a stage that spreads itself across the Plateau-Mont-Royal, in multiple secret locations revealed only as the show begins.

On June 4, The Trophy Hunt premiered at the Montreal Fringe Festival, and ran until June 15. It will also be performed across the country by different teams as part of a rolling premiere. Vancouver, Edmonton, Toronto and Victoria will all show the play at their respective Fringe Festivals.

Set up like a safari, the interactive play blended drama, dance, movement, and ethereal vocal melodies sung to the pitch of an individual flute to discuss the controversial topic of big game hunting.

Audience members were instructed to meet at the Beer Tent at Fringe Park on Rachel St. and St. Laurent Blvd., where they were given a paper map with the secret location marked with an X. At 7 p.m., The Trophy Hunt began.

Once the audience joined together at the secret location, they were met by two rambunctious ‘‘tour guides.’’ 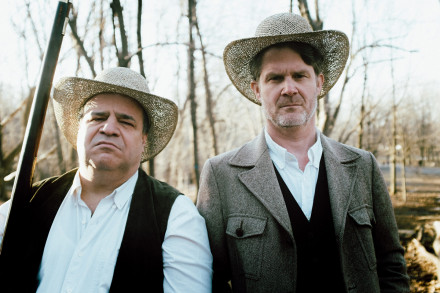 Once the audience joined together at the secret location, they were met by two rambunctious ‘‘tour guides.’’ Courtesy Jaclyn Turner

“Are you ready for the hunt?” they asked, while making quirky jokes with each other and the audience that exhibited the show’s improvisational style.

The story carried its audience through three separate monologues, each representing a different perspective on big game hunting. Each scene took place at a different location—all within the same proximity, making use of public markers by incorporating them into the play with ease and cleverness.

“I didn’t want to do it in a theatre,” said movement and chorus director Vanessa Rigaux of Rabbit in a Hat Productions. “This is what makes the show fun.”

“We’ve had the opportunity to see a lot of site-specific work, a lot of unconventional work, and that’s just something that we like and are attracted to and want to produce and share,” said Rigaux. “That’s our normal, I think. This is totally normal.”

Together with director Paul Van Dyck, the team collaborated to bring Trina Davies’ script to life. Though the original script doesn’t call for it, Rigaux and Van Dyck improvised to create a chorus—10 performers who pranced alongside the audience.

“It’s a serious topic, but we’re just playing. And Fringe is the perfect space to be able to do that.” — Vanessa Rigaux

“They’re spirits of animals that have died in some really terrible way,” explained Rigaux. From a sassy rhinoceros to a long-legged, prancing antelope, the chorus members embody their animals in totality.

The chorus added a dimension to the play that felt not only relevant but crucial. They captivated the audience with unbroken stares and animalistic movements, creating an ambience that supports the scripts’ topical subject matter with liveliness and intrigue.

Midway through the play, a jogger ran through the audience. The two actors who played the tour guides were well-equipped to deal with the situation, shouting “we’ve got a runner!” and ushering the audience to the side to let him pass. The experience spurred a sense of spontaneity.

“I think those are sort of the moments that the audience responds to the most, when you’re just like, ‘oh that was unique,’” said Rigaux. “That was special, just for us.” 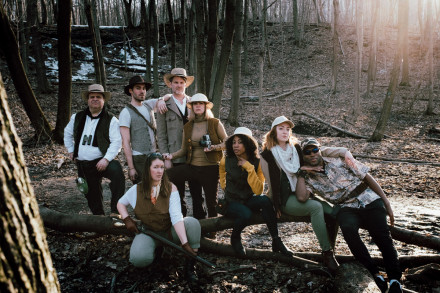 Directors Vanessa Rigaux and Paul Van Dyck improvised to create a chorus of 10 performers who pranced alongside the audience. Courtesy Jaclyn Turner

The team has put strategies to insure that no one gets lost during the performance.

“There’s always a leader, but the main leader is at the back, making sure every straggler gets in with the pack as well,” said Van Dyck. “So they’re always kind of circling, like, to herd dogs and sheep.”

“It’s very animalistic on a lot of levels, but we haven’t lost any audience members yet,” the director added with a laugh.

Though the script touched upon some crucial and controversial subjects, the outdoor setting and movement among the chorus kept the play fun, engaging with the audience in a way that felt all too natural.

“It’s a serious topic, but we’re just playing. And Fringe is the perfect space to be able to do that,” said Rigaux.