Taking Mud and turning It Into Gold

With gleaming eyes and brush strokes on his arms and legs, Jose Antonios Yumars’ art studio is a world where Jackson Pollock meets Henri Michaux. “They’re probably my biggest inspirations,” he says.

Yumar is a 27-year-old Venezuelan artist, whose art is a mix between abstract and modern art. He was most recently featured in Montreal’s street art festival, MURAL, this June.

Yumar showcases canvases that convey the importance of the present moment, revolt from social norms, and the constant obsession with past, and future.

His artistic talents began to show when he was sketching in the back of his law classes in Venezuela.

“I was a law student in Venezuela. I never took notes, I was mostly sketching and painting,” Yumar said. He said he went into law because he hoped to change his country for the better. He later changed programs midway and graduated in Sound Engineering at Musitechnic here in Montreal.

Shortly after former Venezuelan president Hugo Chavez’s death, the South-American country was in economic and political disarray, something that enraged him, said Yumar. That period also heavily impacted his style of art.

“I have some things inside of me about Venezuela that I need to express,” Yumar confessed, “but I’m holding back a bit, and being more patient about those subjects. Because nobody likes those direct messages in their face, you know? So I want to make my way to it, gradually.”

Yumar wants to open a “gallery” in Venezuela, on the streets, to help people find themselves, and find a place where they fit in.

“In Venezuela it’s more graffiti, and tagging, and ‘don’t come to my hood’,” he said. “I want you to express yourself, paint what you’re feeling. I want to change what is happening there. There’s no art, no movement, and I want to change that.”

Yumar never took painting seriously until just recently, even though he doodled his thoughts and revolutionary ideas in his notebook all the time.

It wasn’t until two years ago, when a friendly neighbour would bring him all kinds of recycled goods and encouraged him to use them for whatever he wanted, that Yumar took an interest in using recycled material as canvases.

Yumar said it was in the early hours in the morning in the midst of a raging house party that he fully plunged himself in the world of art, where he had previously just dipped his toes. At that party, he threw a replica of one of Claude Monet’s works on the floor, reached for any available paint, and began to work. Yumar says that he saw nothing, heard nothing, payed attention to nothing besides this canvas. He was alone, in a room full of people, and was deeply moved by the techno beat that played as he painted.

The heavy base of the music ignited something in Yumar, encouraging the brushstrokes to come naturally, splashing the canvas in front of him. His deep connection with the sound manifested itself in his paintings, he said. It was also Yumar’s first encounter with meditation; the first time he really felt present, taking in the music, and the sounds around him. His entire art now focuses on his passion for sound, and notes that we all come from sound, and said he sees a universe in it.

“Even though I was surrounded by people,” he said, “I felt like I was alone, in my own world, always trying to find this imaginary place.”

After this night, Yumar said he began seeing painting as less of a hobby, and more of an expression of self. The following years were then spent finding his voice, and what his art should convey. 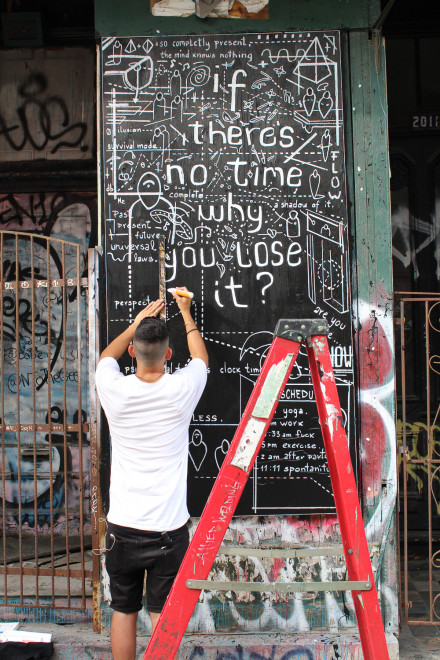 Most of his works are painted in black and white. He uses materials he finds out on the streets, and usually those are the only colours available to him. Even now everything he paints on and with is found strolling the nooks and crannies of Montreal.

Yumar said that he is unable to categorize his art, because it’s so unique and complicated. He also insists that once the canvas is on the floor, the paint begins to drip on its own, with techno music blasting aloud. He has no specific image to paint, nor does he have any idea what his brush is doing once he gets started, he just simply follows the beat.

He described himself as being ignorant when it comes to art movements, but he see that as a positive thing. He said his ignorance helps him remain true to himself, and frees him from being forced into a genre.

“I guess at some point people are gonna put it somewhere, because unless they do, they won’t know how to handle it,” he said. “But until then, I’m freestyle. I don’t really mind, it doesn’t matter as long as we both understand it. It’s cool.”

Although he looks up to painters like Jackson Pollock and Henri Michaux, he said his biggest inspirations are life and death. An avid admirer of Ekhart Tolle’s The Power of Now, he admitted that he wants people to get out of a perfectly aligned society, and to be more free and present. A revolutionary soul, Yumar paints to invoke positive change, especially when it comes to his country’s future.

“I don’t wanna express negativity to people,” he said. “I’m mostly here to invoke hope, and show that there is a possibility for betterment.”