A member of La Meute who was spotted in Charlottesville during the “Unite the Right” Rally was also seen in Quebec City’s protests this Sunday. This despite La Meute telling news media that the group had suspended him.

Photos of Shawn Beauvais-Macdonald at the protests were posted this afternoon on a Montreal anti-fascist website http://montreal-antifasciste.info/. Beauvais-Macdonald is known for running the anglophone Facebook page of La Meute.

La Meute Spokesperson Sylvain Brouilette told the Montreal Gazette on the day of the protest that Beauvais-Macdonald had been suspended from the group, but the photos show that he was allowed to take to the streets with the rest of the group.

Beauvais-Macdonald responded to The Link explaining that La Meute suggested that he not attend the protest, but that he chose to come despite that. 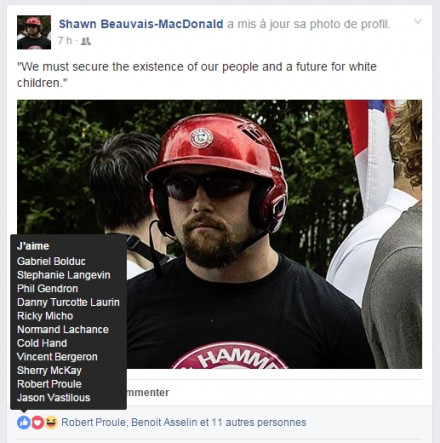 “I put on my masterful disguise and came anyways,” he said.

He was not kicked out afterwards. “They gave me the benefit of the doubt and heard me out,” he explained.

He said he suspects that his suspension is indefinite, and says he no longer has access to the sites he used to manage. He admits that he’s disappointed about that.

“It’s a great organization and not the least bit extreme. I feel they do good work, and of course it’s a shame that I cannot move forward with them as I would have wanted.”