Young Activists Continue to Organize for Fridays for Future

A small group of activists walked up Park Ave. on Friday to protest the Trans Mountain pipeline.

In a moment of silence, demonstrators stood with their fingers crossed and their hands raised. The hand gesture shows solidarity with the Wet’suwet’en First Nations people, whose unceded land is directly affected by the environmentally damaging project.

The majority of participants are young—still in high school or CEGEP. They have taken it upon themselves to organize and meet every Friday at Jeanne-Mance Park to protest a variety of issues affecting the environment. 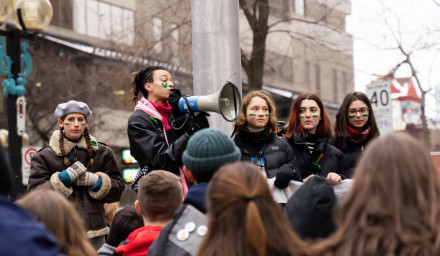 Pour le Futur is a group of students who were inspired to take action by Greta Thunberg’s school strikes. They have been meeting on a regular basis for over a year now, with their protests taking on a new environmental theme every few weeks. This week they were protesting the Trans Mountain pipeline, and in a few weeks they will protest the proposed Gaz Naturel Liquéfié Quebec pipeline in Saguenay.

“It is a lot,” said organizer Olivia Ruge about what keeps her motivated to protest in lieu of attending Friday classes, “but I think we all live with this guilt of not feeling like we’re doing enough; just doing things in your individual life is good, but it’s not enough right now, so I think that it’s a big responsibility and a lot of us get really tired, but it’s morally what we have to do.”

Although the students may feel they are taking on a lot at times, there seems to be a true sense of camaraderie amongst the young protesters as they chant and clap their way through downtown Montreal. At the end of their course, some of them make speeches in both French and English, always met with supportive cheering.

“People with political power need to listen to us and act for us because we can’t do that ourselves.” —Olivia Ruge

Some of them hold a large piece of PVC that symbolizes the pipeline. It’s inscribed with the name Kinder Morgan—the previous owner of the pipeline—and almost looks like a battering ram, in the middle of a group ready for a seige. However, group member Alex Valiquette dissuades potential recruits from being intimidated and stresses that it is important “to be courageous for the first time you come to the meetings.” He continued, “it’s not rare that there’s new people coming in and we welcome them with open arms.”

He also mentions the empowerment he feels by getting involved. “When you get involved you have the feeling that you can actually change some things,” said Valiquette.

It’s easy to tell from talking to many of the group members that they are well informed and extremely passionate about the climate crisis, but there is a general sentiment that protesting is not enough. 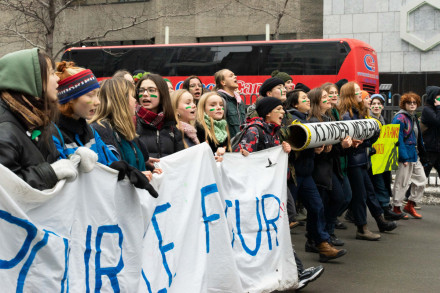 “I find it really great that kids are out here protesting but ultimately it’s not our problem in the sense that we didn’t create the problem we’re going to have to live with it.” Olivia Ruge urges that although the group is doing as much as they can to bring recognition to the cause it is ultimately the responsibility of adults to remedy the climate crisis.

“We’re not really the ones with the power to make change and I think adults, especially parents and people with political power, need to listen to us and act for us because we can’t do that ourselves,” said Ruge.

While it may be ultimately up to officials in government to make policy changes, that won’t stop this group of young activists from continuing to fight and bring awareness to their cause.