It was a full crowd, filled with eccentric style and pints of beer at Chez Morrígan. The cozy, dim-lit bar had a disco ball projected on their staircase entrance, attracting passersby on Crescent St.

Oct. 3 was the first day of La Riposte Féministe’s three-day event, Bodily Automn’omy Fest. That night, there was a partnership with SistersInMotion and Poetry Nite.

La Riposte Féministe is a collective movement formed in 2015, after organizing a counter protest to Ottawa’s March for Life that is anti-abortion.

Sonia Palato, co-founder, took the stage right before the intermission of the event, to properly introduce La Riposte Féministe’s mission and discuss the details of their festival.

La Riposte Féministe tries to fight for people’s bodily autonomy by reinforcing “the lived experience of the body as a source of knowledge,” said Palato.

“We’d like to collaborate with events by making both crowds meet each other,” said Charlotte Gilbert, co-founder of La Riposte Féministe.

“Open mic is a good way for everybody to be heard in an artistic way,” added Gilbert. “I want them to feel heard, to know what La Riposte Féministe is, and [maybe] participate in the next couple of days of our festival.” 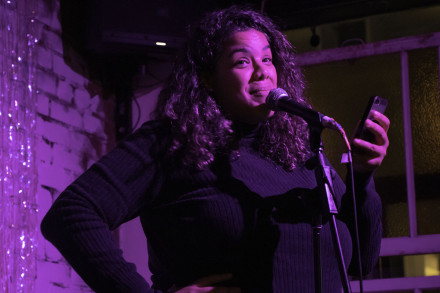 Malek Yalaoui, co-host of Poetry Nite, read several feminist poems of hers throughout the night.

One of Yalaoui’s poems was about her first experience getting a boyfriend. It talked about society’s stress of relationships, and how people tend to assume that romantic experiences can fix their internal struggles.

Yalaoui concluded that she realized she is, in fact, not the problem.

Throughout the poem, she expressed that she has learned how to come to terms with her loneliness, sexuality, and gained experience from past relationships.

“I now have the strength to say, ‘I don’t like that,’” said Yalaoui. “And honestly, boyfriends aren’t that necessary.”

Felix O’Connor, one of the poets, recited a piece about the time he attended an open-mic night outside of the city, where he had an unpleasant experience with someone making a comment about queerness.

This inspired O’Connor to perform the poem, of which seemed to be recited with the same passion he felt as he had experienced the unpleasant encounter.

“I don’t know why God decided to give me this body that belongs to some strange girl with whom I have not been acquainted.” O’Connor read.

What led O’Connor to perform such a vulnerable piece in front of a large audience? Simply put, he said, “I wanted to see if it was good or not.”

The entire crowd had not only snapped their fingers as encouragement during his performance, but roared with applause once he walked off the stage.

In a previous version of this article, Felix O’Connor was misquoted as saying “I don’t know why God decided to give me this body of which I haven’t been acquainted.” The Link regrets this error.