Poetry Nite Is Brought Into 2020

A Mosaic of Liberating Creative Performances

Event coordinator Malek Yalaoui opened the night by introducing the audience to the concept behind Poetry Nite, a space that prides itself on its social media platforms as being “dedicated to sharing the work of poets/musicians/writers/artists of all ages, skin colours, and [gender/sexual] orientations.”

Yalaoui’s speech ended with an open invitation for anyone who felt inspired during the event to go up and perform, even if they hadn’t expected to that night.

“It’s important that we give people this kind of crucial validation. Your story does matter and deserves to be heard,” said Yalaoui.

Poetry Nite has been organizing events since fall 2017, attracting a mix of artistic regulars and curious new members each time. Poetry Nite also collects funds for BIPOC individuals. The event welcomes not only poets, but any and all performers willing to share their artistic expression.

“You should all feel awesome for taking part in this multi-millennia tradition.” — Zain A. Alattan

Nickle Peace-Williams, a dance student at Concordia, was one of the night’s performers.

Peace-Williams signed up spontaneously after hearing Yalaoui’s welcome speech. As a first time participant she reflected on the importance of sharing her art with others.

“To me, poetry means a certain moment when someone chooses to participate in an expression that is thoughtful,” said Williams.

Another performer and long-time regular, Zain A. Alattan opened his performance by expressing his enthusiasm at having Poetry Nite restart their open mic nights in 2020.

“You should all feel awesome for taking part in this multi-millennia tradition,” said Alattan.

He performed two original poems that night: “Ode to the Green Eyed One,” and “Tear.” Both received snaps, claps, and shouts of encouragement from the audience. This sort of on the spot feedback is traditional in spoken word and is something that the event prides itself on.

“We are here to try things, and we’re only alive once so let’s just try it,” said Yalaoui. 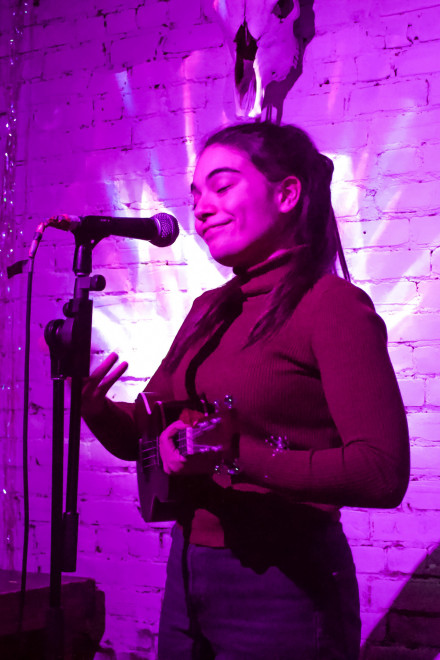 Morgane Teotonio was one of the night’s more spontaneous performers, going up to the mic with a poem written throughout the course of the event, in a moment of inspiration. The poet spoke about the significance of having a space like Poetry Nite in Montreal.

“In our modern world we forget the spiritual, but instead of letting it fester inside you, you can bring those feelings out into the open.” said Teotonio. “If you have something to say, you are welcome. You don’t need to be a poet, everyone has something.”

For other participants of the event, bringing their poetry to the open mic is an act of perseverance. Such was the case for Frantz Séïde Cameau. “This was a new year’s resolution for me, performing my poetry.”

He has been writing for nearly 10 years now, and still finds the thrill in the art of spoken word performance. “I get nervous every time I go up,” said Cameau. “But afterwards I always feel really relieved.”

Cameau ended by echoing Alattan’s feelings on the tradition and importance of spoken word in our society. “Poetry is to me one of the oldest, most primal forms of expression. The oral tradition, I think it’s quintessential,” said Cameau.

“If you’re looking for places to express yourself, nights like this are perfect.”