The “Orange Wave” came crashing down Monday night as Justin Trudeau and the Liberal party secured a majority government with 184 seats—pushing the NDP to a third place finish.

The mood was grim at the NDP headquarters in Montreal as the polls closed and results began to pour in. The shaking heads and long faces among supporters were interrupted by the occasional cheer for one of the party’s 44 victorious candidates.

The NDP’s poor showing on election night was closely tied to its crippled standing in Quebec—a province whose support largely bolstered the party to the status of official opposition in 2011.

Sandrine Traore, an NDP staffer, told The Link that the party succumbed to the divisive politics of the niqab debate, which she underlined as the main factor in their defeat.

“People talked a lot about it, and the media really played with the niqab story,” Traore said. “We lost a lot of Canadians who said to themselves ‘we’re against the niqab, and you’re for the niqab’ … that’s what really influenced them.” 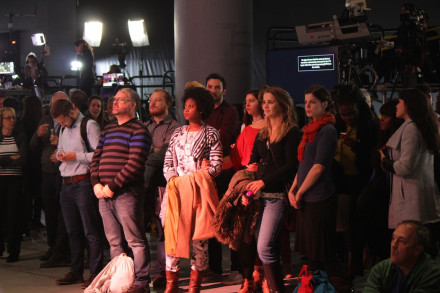 NDP staff and supporters react to a Liberal majority win on Oct. 19, 2015 at the Palais des Congrès. Photo Matt D’Amours

After making phone calls to the other party leaders, Tom Mulcair—who managed to keep his seat in the Outremont riding—took to the stage at the Palais des Congrès to deliver his concession speech.

Despite the NDP’s significant losses, Mulcair remained smiling as he thanked his supporters and committed to working hard for them in the next majority parliament.

“To new democrats here tonight, and in every community across this country: thank you for your hard work, your dedication to our cause, and your steadfast hope and optimism,” Mulcair said. “The next chapter begins in our effort to build a better Canada.”

Results for other party leaders: