The Concordia Stingers women’s basketball team came out looking for redemption after losing their last match against defending national champions, the McGill Martlets, 93-66, in November.

But they were unable to make it happen.

“There was definitely a better effort and a better energy this time around,” said Stingers Women’s basketball head coach, Tenicha Gittens. “But sometimes you can’t control whether you have a bad game or not.”

Things started off strong for Concordia as they put up 18 points to McGill’s 14. Among the scorers were forward Marvia Dean, who was playing her first game this season after being sidelined with an injury, and Sabrina Stambouli, who scored a three-pointer on her very first shot this season.

Stambouli, who previously played for the Nova Southeastern University Sharks, is a new member of the Stingers that looks to be a promising addition to the lineup coach Gittens said.

“She stretches the floor out for us, and she’s a hell of a shooter,” added Gittens. 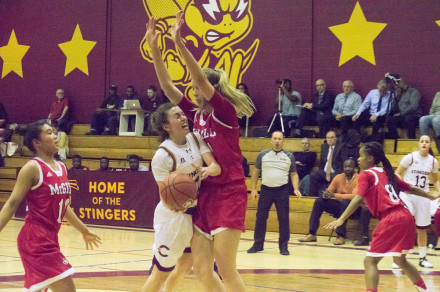 The second quarter proved to be just as solid for the Stingers as they managed to keep it close. The half ended with Concordia up 34-31 over the Martlets.

The second half of the game is where it started to fall apart for Concordia. The Stingers gave up the lead, going down 39-36. They then managed to tie the game at 44, but not for long, as the Martlets would score from outside the paint, sending them into the fourth quarter up 47-44 over the Stingers.

The final quarter was even worse than the third. In this quarter, Concordia allowed 23 points while only putting up 11.
Gittens realizes that the team needs to make adjustment.

“We just have to do a better job,” she said. The Stingers head coach also acknowledged that there “were some bright spots” but said they could have been better. Gittens also credited Mcgill’s winning mindset with their ability to stay calm in difficult situations.

“They’re five-time defending provincial champions, and they just won nationals,” said Gittens. “They know how to maintain their composure, and fight to come out on top.”

The Stingers have yet another crack at the Martlets as they faceoff this Saturday at 4 p.m. in another double header, this time at McGill.