The Martlets outplayed the Stingers on Thursday evening, marking the second loss in eight games for Concordia.

While the second half garnered the most action and showcased Concordia’s potential, the first created an unsettling tension as the Stingers struggled to maintain their momentum.

Gittens said she knew it was going to be a fight against the Martlets as a result of a bad week of practice.

“There was less energy, we [communciated] less, the atmosphere was not as usual,” added rookie guard Myriam Leclerc.

With Stingers centre, Ladonna Lamonth, recovering from a sprained neck, no one was able to fill the void of her absence on the court, a variable that was decisive in the outcome of the match, according to head coach Tenicha Gittens

“It isn’t a habit of ours to begin slow like this,” Leclerc said. 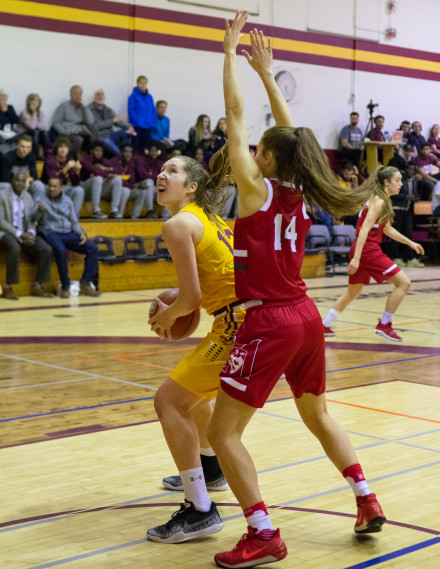 This loss is the team’s second in eight games, and they feel it was not representative of the talent this team has and the performance they usually put forth. Coach Tenicha Gittens chalks it up to a bad week of practices. Photo Elisa Barbier

The first half showed a strong Martlets side who found the gaps in Concordia’s defence. By the end of the first half, 50 per cent of McGill’s shots had found the net compared to the Stingers 23 per cent.

The team struggled to maintain the momentum they found at the end of the first and second quarters.

The Stingers went into half-time down 11 points, the score sitting at 34-23. This highly contrasts Concordia’s last game against McGill on Nov. 22 when the Stingers had then finished the first half with a 23-point lead, winning the game 77-63.

From the beginning of the second half, the Maroon and Gold faced a battle to close down McGill’s lead.

In the third quarter, Concordia scored eight points on turnovers, reducing the lead from double digit to a single digit.

The Stingers took over the game in the final quarter as they pushed back in an attempt to increase their lead over the Martlets. 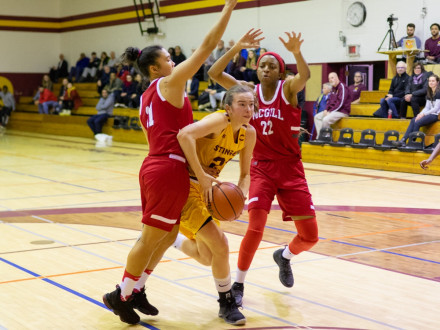 The Stingers will have a chance to prove that Thursday’s game was a one-off as they have a chance at a rematch Saturday afternoon on McGill’s home court. Photo Elisa Barbier

For nine and a half minutes, the tension was palpable. The players from each team were alternatively jumping up and down in their seats, coaches screaming at the top of their lungs as the crowd reacted to every action on the court.

The end of the fourth quarter was slowed down due to referee calls on personal fouls, interrupting any form of momentum.

“It sucks, it plays with you mentally, it is frustrating,” Gittens said.

She added that Concordia did not benefit from the same referee calls McGill was given, in reference to a call made on Leclerc in the last 30 seconds allowing the Martlets to separate themselves from the Stingers and take the lead.

Guard Elise Roy said she was not surprised by the calls as it is always physical to play against McGill.

Roy, like her teammate Leclerc, expects Concordia to bounce back and prove that Thursday’s results does not reflect the team’s habitual performance.

The Stingers will have another chance to take down McGill this Saturday at Love Competition Hall at 4 p.m.