Coach Brad Collinson’s squad was looking to bounce back from their embarrassing 74-3 defeat from a week ago, but defeating the defending RSEQ champion was going to be a tough task for Concordia.

“When you don’t show up against good teams, this is what happens,” said Collinson following another disappointing loss. “We have to go back to the basics. We have a bye week to prepare for [Université de] Montreal.”

Collinson couldn’t have been more right. His offence was dominated from the start by Laval’s defence.

Quarterback Adam Vance had an extremely difficult outing, completing only five out of 17 pass attempts. He also threw two interceptions, one of which was returned for a touchdown by Laval’s Émile Chênevert.

The only bright spot on offence was running back Micah Sullivan. He managed to amass an impressive 94 yards on the ground. The highest total of any player on either team.

Sullivan could not finish off his solid performance as an injury ended his day early.

“We played horribly,” said fourth year offensive lineman Maurice Simba, who is still optimistic for the future of the squad. “The season is not over yet. It’s only week five.”

The Stingers couldn’t find the end zone for a second week in a row.

“If you ask me, yes [it is frustrating],” said Simba on not scoring for a second game in a row. “It’s not a good thing for us to start pointing fingers now. We have to play together. My main point as a veteran is to bring people together.”

The struggles were not only on the offensive side of the ball. The 54 points allowed to Laval speaks volumes of their performance.

“We have a good system. We have a good coordinator.” said fourth-year player Jérôme Bédard-Guillemette. “We just need to play until the end and just try to stop all the errors we are doing.”

The defensive line was able to apply pressure to Laval quarterback Hugo Richard more than once. They even reached him for a sack in the third quarter. 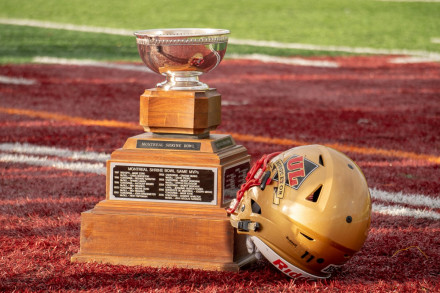 The one bright spot in Saturday’s loss is that the event reached and surpassed a landmark $1 million raised for the Shriners Hospital for Children since the charity game’s inception 32 years ago. Photo Elisa Barbier

But the effort was not enough as the defence gave up 38 of Laval’s 53 points. The other points came off the pick-six and the four safeties given by the special units’ team.

Both coach and players were in agreement that the bye week was welcomed at this point in the season.

The extra week of preparation will be crucial ahead of the matchup against Université de Montréal.

“We are fortunate to have this bye week,” said Simba. “We are gonna watch some film on Monday and practice a little bit this week. We are going to try to make sure that we are in top shape to play [Université de] Montréal in two weeks.”

Concordia will look to avenge their humiliating loss suffered at the hands of the Carabins when they travel to Cepsum.

“Of course!” said Bédard-Guillemette on looking forward to revenge against Université de Montréal.. “We are going to go there and take care of business.”

Concordia is now sitting in third place of the Réseau du sport étudiant du Québec rankings with a 2-3 record. The top four teams in the RSEQ division qualify for the provincial playoffs.