Laval 2, Concordia 1: Stingers Give Up Lead After Disappointing Second Half

While an improvement on last year, a 1-2-1 start to their outdoor campaign was not where the Concordia men’s soccer team wanted to be after having finished top of the league during the winter season.

Coming up against the Laval Rouge et Or on Friday night, they had a chance to not only take over the fourth and final playoff spot, but get within one game of third place.

There could not have been a starker contrast to the two halves that the Stingers played. They came out firing on all cylinders and dominated the majority of the flow of the game, going into halftime with a 1-0 lead. After the restart, it was as if another team had taken their place. Missed passes and shaky defense saw the Rouge et Or score two goals in eight minutes. That would be all they needed as they went home with a 2-1 victory.

In the midst of a high wind warning from Environment Canada, who warned speeds could reach up to 90 km/h, the Stingers possession style of play was going to have to be adjusted. For the first half, the adjustment seemed to work wonderfully. With the wind at their back, they pressed the Rouge et Or back line, forced mistakes, and created early offensive pressure.

Head coach Greg Sutton was not pleased with the team’s overall performance but did look to the first half as a stronger point.

“We did okay in the first 45 [minutes] but we can’t take a half off in this league and expect to get away with it,” said Sutton. “We just have to compete for a full game. We did some good things but the bad outnumbered the good tonight.”

Twenty minutes into the game, the pressure paid off, as Yousef Benali found himself one-on-one with the Rouge et Or keeper and made no mistake, sliding the ball into the bottom corner. The first half was characterized by the Stingers intensity, something that was sorely lacking in the second half. Rookie defender Alexandre Fontaine had a standout first half, dominating both sides of the ball and making runs up and down the right flank.

“We dominated the first half and stuck to the game plan,” said Benali. “Morale was good and we just didn’t continue with that mentality in the second half. There’s a big game coming up on the weekend against McGill and we have to focus on outworking them like we try to do every team.” 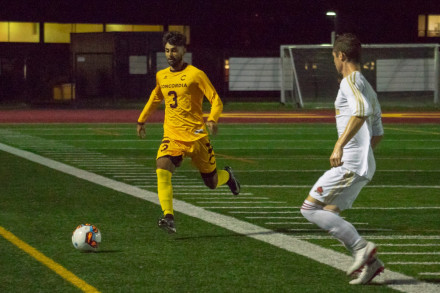 With a draw on Sunday night, the Stingers still have a chance to grab the fourth and final playoff spot. Photo Elisa Barbier

However, the second half could not be further from the same. Right from the start, the Stingers looked flat on their feet and were not pressing in the way that made their first half so successful. As Laval searched for an equalizer, Concordia’s defence structure seemed to be in disarray, allowing free time on the ball and giving the Rouge et Or more time to press higher and higher up the pitch.

The breakthrough came just nine minutes into the second half when Laval captain Bila Dicko-Raynauld found himself wide open off of a corner. After that, the visiting team doubled up on the pressure and found a go-ahead goal through Gino Temguia.

“We were not focused in the second half and we were thinking that we were going to easily win this game,” said Fontaine. “We had a strong first half and it’s good to take positives out of tough losses and we just have to go into McGill with confidence and compete for a full three points.”

As the Stingers looked to equalize, not only did they run into a Laval defence with renewed vigour, but the wall of high-speed winds that had been so useful for them in the first half, had turned against them, knocking every high ball out of the air. The Rouge et Or were comfortable with just sitting back and not allowing Concordia through. They even had several chances to increase the lead had it not been for a couple strong saves from goalkeeper Karl Gouabe.

Stingers captain Antonio Bruzzese was disappointed with the result but stressed that their team is capable of completing the top sides in the league.

“We came out playing like we had already won the game,” said Bruzzese. “We had a set gameplan that we weren’t able to execute in part because of how tough the conditions were and their pressure forced a lot of turnovers in our half. They got two lucky breaks and finished them and that’s what made the difference.”

While a 1-3-1 record means that things are not looking as good as they did coming out of the indoor season, their year is by no means over. More consistent efforts could see them genuinely compete with some of the better teams in the league. A massive rivalry game against McGill Sept. 22 at Concordia Stadium is one example. Even a draw will see them grab possession of the fourth and final playoff spot, it’s just up to them to take it.