Stingers Outplayed by Voyageurs in Every Aspect of Their Game

While the Stingers started off with some really strong offensive chances, things just couldn’t connect for the Maroon and Gold Friday night as they fell 4-2 to the Laurentian Voyageurs at home.

The home team got an early power play, their first of eight throughout the night. Despite two solid chances from second-year defenceman Bradley Lalonde, they just couldn’t put one past Laurentian goaltender Mackenzie Savard.

As the power play came to an end, the Voyageurs made quick work of generating a turnover and heading off on a two-on-one, slipping the puck past veteran goaltender Marc-Antoine Turcotte.

“Terrible, we didn’t execute the power play properly and we didn’t have success,” said head coach Marc-André Élement after the game.

All throughout the first period, the Stingers struggled offensively, defensively, and on special teams and these problems would not go away as the game stretched on.

“If we play for 40 minutes in this game, we’ll never have success,” said Élement. “We have to play for 60 minutes. We didn’t show up for the first period and I think the second and third we had the control a little bit, but we didn’t play well tonight. We didn’t deserve to win.”

Laurentian scored another with just over six minutes left in the first period. They’d then go on to get called for two more minor penalties before the end of the first, giving Concordia two more opportunities to capitalize on a man advantage. They ultimately failed to do so. 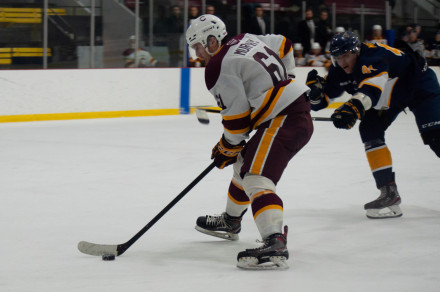 Rookie Liam Murphy got the first of two goals for the Stingers, but these two goals would not be enough to put them over the edge. Photo Caroline Marsh

Down 2-0 after the first frame with 1:27 left to play on the power play to start the second, the Stingers looked to come back stronger.

However, their power play troubles were chronic and their defence failed to keep the puck in the offensive zone, creating a number of offensive opportunities for their opponents.

“I’m not sure [what happened with the power play],” said Lalonde. “I think we were just thinking too much to be honest. It’s a major reason why we lost.”

Midway through the second, things seemed as though they might be looking up for the Stingers as rookie Liam Murphy managed to score on a breakaway. After a missed penalty shot and now six unsuccessful power play campaigns, the Stingers went into second intermission down by one.

Now in a one goal game, victory was well within reach for the Stingers, so long as they managed to find a spark when they took the ice for the third.

Colin Grannary provided that spark momentarily, scoring off a rebound — literally laying down — to tie the game at two. But, just as easily as he could provide that spark, he was able to take it away.

Caught for hooking, Grannary took the first in a series of undisciplined penalties for the Stingers. Ultimately, it led to another Laurentian goal and a game that was still up for grabs for the home team started to fall apart yet again.

A few minutes later, Jake Fletcher took a high sticking penalty, which would lead to the fourth Laurentian goal — the nail in the Stingers’ coffin.

“We want to be disciplined, especially at the end of the game,” said Lalonde. “We had a chance to come back and some of the penalties took the momentum away and gave it to them. The penalties were late so I think we could have done something earlier to keep us out of that position, but we definitely have to stay disciplined, especially in the last couple of minutes when we need a goal.”

Pulling Turcotte in the final three minutes, the Stingers tried their best to come back, but a power play unit that was riddled with problems all night long couldn’t make it happen, even with a two man advantage.

It was over, and Laurentian — dead last in the OUA East — captured their third win of the season.

Leaving the loss behind them, the Stingers now turn their attention to a new opponent. They’ll face off against Ontario Tech at home at 5 p.m. on Saturday in hopes of ending a four game losing streak.

“I think it’s about coming in and not forgetting that we lost, but learning from it and accepting the fact that we have to be better and work harder to win,” said Lalonde. “Tomorrow is a really big game, we’ve got to snap this losing streak and we want to do it at home.”