Tender Textures, Colours, and Familial Bonds Featured at the Exhibit

After three weeks of running, the Visual Arts Visuels Gallery wrapped up their first winter exhibit, I feel tender, on Feb. 1.

“These artworks are very warm, and they speak about things that can be personal, and close to oneself,” said Jose Garcia, the gallery’s financial and administrative coordinator. “It helps us relate; that’s why we thought that this show was completely tender.”

On the southern wall of the gallery hung Tota Perry-Marinov’s 20 by 28 inches untitled piece, described as “latex balls.” Her piece reminds Garcia of a cocoon or a honey hive, he said.

Perry-Marinov explained that during the creation process, the material demanded a lot of care.

“[The piece] is not forever,” said Perri-Marinov. “The material will crack, and eventually disintegrate, and it’ll keep changing.”

According to the artist, working with the latex over time was trying. It was time consuming, and the smell of the material affected her breathing. The painting and drawing student checked up on the evolution of the latex every morning. Perri-Marinov didn’t intend to make a sculpture out of it, rather, the project found her as she was creating something else.

The artist originally intended to make molds out of the latex. She applied liquid latex, a yogourt-like substance, to small rounded objects, and after peeling the hardened latex, she discovered shapes and textures that piqued her interest. Soon, it became an experimental piece.

“I left [the latex shapes] next to each other, and I found out they stick,” she said. “I just kept making them and it took over the project that I was supposed to be doing and [I was] just excited to learn about this material, and wait on it.”

“I had to wait for it to dry, watch it change. I didn’t know what was going to happen,” continued Perri-Marinov. “With drawings, you’re watching the drawing the whole time, you’re controlling it. But I would have to come early, and check on it. And sometimes it wouldn’t be dry and I would be frustrated.”

The ephemeral piece coincidentally hung in the same spot where other evolving and organic pieces have been placed in recent shows, such as Annik St-Arnaud’s The Banana Project, in which fresh fruits were involved.

“It’s just exciting to me to have made something that’s always curious,” Perri-Marinov said.

Perry-Marinov said she found tenderness in the creative process. “I was so intrigued and attached to my sculpture […]. It was meditative to sit there and do the same thing over and over again,” she said.

“It speaks a lot of organic forms of nourishment, and homes,” Garcia said. “It’s captivating, for sure, the colours are warm—it changes colours with the temperature, too. It has a lot of presence.”

Painting and drawing student Daniel Itiose returned to the student-run gallery for I feel tender, showcasing another emotional work in the style of hyperrealism, where the artist depicts their subject exactly as they are, with minute detail and consideration for realness.

In Faith, behind her glasses, Itiose’s younger sister looks beyond the viewer, gazing into a world that is just hers. He described his sister as someone who keeps to herself, which her expression in the piece perfectly exemplifies; it seems like she has a rich inner life. 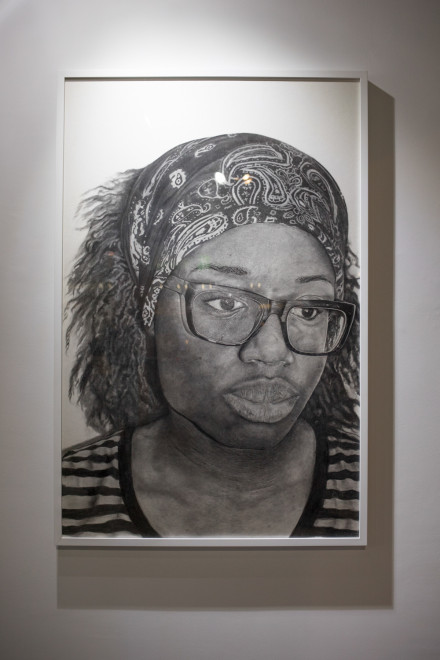 Daniel Itiose’s “Faith” is a hyper-realistic piece of his sister, who is someone he describes as important to him. Photo Maggie McCutcheon

“The whole idea of I feel tender is about something that you feel close to, and that keeps you warm,” Itiose said. “My sister is one of my favourite [people] in the world […] She’s always been one of my biggest fans […] she was one of my biggest motivators.”

Itiose used a combination of powdered charcoal and carbon, pouring around 300 hours into the artwork. Working on Faith solidified Itiose’s penchant for hyperrealism, he explained.

Itiose based the artwork on a photo he took of Faith; it was a candid shot, that to him represented her personality, namely her glasses, the scarf around her head, and her emotionality he got to capture. “This was back when I lived in my parent’s house,” he said. “I took a few pictures, and this one stood out […] it just seemed so perfect, it caught a lot of her character.”
Faith is a testimony to his love for his sister, and his way of thanking her, Itiose concluded.

Visit http://vavgallery.concordia.ca/ for information about the gallery’s next exhibitions and projects.