Protesters Chant “We Believe You” in Support of Sexual Assault Survivors

By midday Sunday, Parc La Fontaine was filled with Montrealers bringing awareness to sexual violence following a recent wave of online accusations against perpetrators of sexual assault in Quebec.

These testimonies on social media followed the July 2 video posted by Sabrina Comeau in which she warned others of her abuser. The video inspired many Quebecers to come forward about their own experience with sexual assault in many forms. Several Instagram pages have also been created as a platform for people to share their stories. 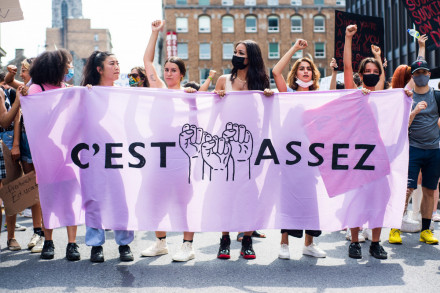 The protest’s purpose was to heighten the awareness these online accusations have been bringing to sexual assault and denounce rape culture.

Speakers shared personal stories and called for action to protect BIPOC and marginalized groups. The speeches inspired bursts of applause, shouts of support, and brought tears to many throughout the crowd ahead of marching through the city’s streets towards the Montreal courthouse.

“During this pandemic I saw a rise of violence against Indigenous women. Especially women who are living on the street,” said Jessica Quijano, coordinator of the Iskweu project, an initiative of the Native Women’s Shelter of Montreal. “And this is a direct result of our city of Montreal, who did nothing to offer places for people to stay. This is the non-action of [the] government.” 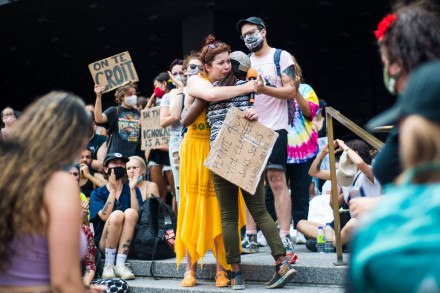 “Missing and murdered Indigenous women and girls, trans and two-spirit has been going on since the beginning of colonization and the government has done nothing about it,” Quijano told the crowd.

“There are a lot of women who are still remaining silent, but I think we are moving in the right direction.” —Kharoll-Ann Souffrant

Quijano asked those present to commit to taking action against these injustices. “We are asking to defund the police. We do not need more police in the lives of Indigenous people. We do not need them,” she said. “What we need is human rights. We need basic housing, we need education. We need restorative justice, we need to allow Indigenous peoples the sovereignty to be able to heal from the traumas that we have committed in this country.”

Co-organizer Kharoll-Ann Souffrant said as a survivor herself, she wanted to share her story to encourage Black women to speak up about their sexual assaults. 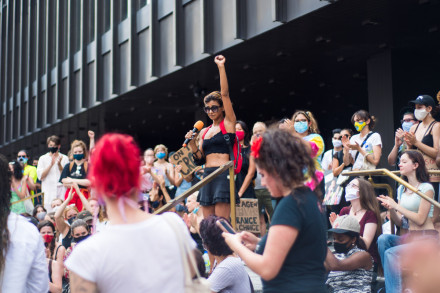 “There are a lot of women who are still remaining silent, but I think we are moving in the right direction,” said Souffrant.

This encouragement to come forward about sexual assault was reiterated among the crowd. Many held signs that read “we believe you.”

The speakers gave powerful, emotional, and at times hard-to-deliver speeches. Members of the crowd stood in solidarity beside one speaker as they fought through tears to continue telling their story.

At 2 p.m., the crowd began to march. Led by a truck blaring upbeat music, the protesters shouted call and response chants until reaching the courthouse. 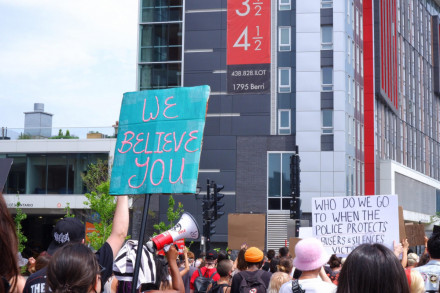 Protesters chanted “we believe you” on their way to the courthouse. Photo Ray Resvick

A line formed at the front of the crowd to share their own stories. Person after person found the courage, many for the first time, to speak about their experiences with sexual assault. The crowd began to thin, but many remained sitting on the street in front of the courthouse to support those speaking their truth.

In Canada, 83 per cent of sexual assaults go unreported. Many who have gone to the police have been turned away or felt unsupported.

Sunday’s demonstration was not only a call to encourage survivors to speak up about their experiences. It was also a call to action to improve government and police response to these reports in order to deliver justice to those living with the traumas of sexual assault.