The Canadian Futsal national team was just a point away from qualifying for the Futsal World Cup in 2016, when they were ousted by Cuba 7-4 at the CONCACAF Championships last May.

Since then, head coach Kyriakos Selaidopoulos has kept busy, holding futsal camps across Canada in preparation for the next round of qualifications in 2020.

Selaidopoulos and his staff have travelled to Yukon, Northwest Territories, Saskatchewan, Alberta, New Brunswick and Quebec in order to grow a larger pool of players, as well as promoting futsal across the country.

Along with assistant coach Mike Vitulano, the two closed off 2017 with the team’s final two day identification camp of the year this past weekend. They took a closer look at some players from the Première Ligue de Futsal du Québec at Centre Sport Xpo in Laval.

Both coaches put players through drills, followed by an intersquad match between the team. The goal was to identify players who can fit in the national set up. 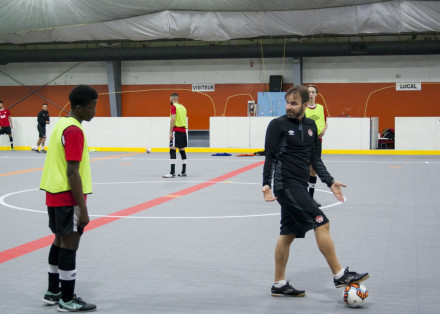 “We saw what we expected and now we just need to keep on monitoring everybody to see where [they] stand,” said Selaidopoulos. “The [players] that we wanted to see and that we saw closely, we evaluate them to see how everything’s gonna fit with the rest.”

The coaching duo admitted there are players they looked at closely over the weekend, but didn’t reveal any names. “We have an idea of one or two players that can come into that environment and potentially do well […],” added Vitulano.

A player who stood out at the camp was Nazim Belguendouz. The FC Sparte player, who recently became the first player to be named Soccer Canada’s futsal player of the year, was seen motivating his players during drills and on the bench throughout the scrimmage.

With the player pool still being evaluated, Vitulano hinted at a bigger role for Belguendouz stating that they’re “definitely gonna count on him for 2020.”

Since Canada’s loss to Cuba, coaches and players have been focused on raising the standards for the program. With an influx of players on their watchlist, options for the team are no longer scarce.

After Canada’s loss to Cuba, Selaidopoulos assessed both the positives and negatives. He says he knows where the team stands and where they need to be when 2020 comes around. 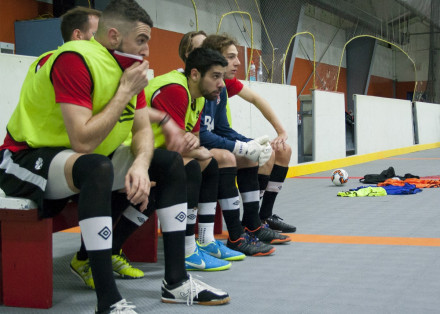 PLFQ players watch on during an intersquad match this past weekend. Photo Alexander Perez

“We’re working on little things we’re seeing a lot of players, so we have a bigger pool [and] that’s a plus. At the end of the day we must be ready.”

According to Vitulano, prior to finalising team Canada in 2016, there were 35 players to choose from before selecting the final 15. Vitulano and Selaidopoulos now have a pool of over 200 prospects.

With options to choose from across the country Vitulano also expressed that the national setup could allow for younger players to make the cut.

“The next two years are important in preparing young players […],” said Vitulano. “We want them to [play at] a higher standard so they can bring that experience to the international level.”

The weekends ID camp marked the last piece of business for the Canadian national futsal team in 2017. With 2018 slowly making its way, Selaidopoulos hinted at a “big year” ahead.

He said they have plans set up, with announcements imminent at the turn of the year. “I think it’s gonna be a big plus for the program,” said Selaidopoulos.

From a players perspective, Belguendouz is looking forward for the new year to make its way. He said that the team will have a trip to prepare for, with the prospect of facing international countries in order to better prepare come time for qualifications.

Selaidopoulos will continue to hold camps until then with a trip back to New Brunswick, Jan. 11-13. Continuing his search for further expansion across the country, Selaidopoulos calls on all players to remain focused.