Forwards Audrey Belzile and Claudia Dubois were the team’s two most productive players this season, posting 18 and 20 points, respectively. It turns out that their dynamic presence on the ice has translated off of it, as well. Belzile, or “Beli” and Dubois, or “Dubs” are best friends and roommates.

Although, this hasn’t always been the case. In CEGEP, they were “enemies” who played on rival teams. 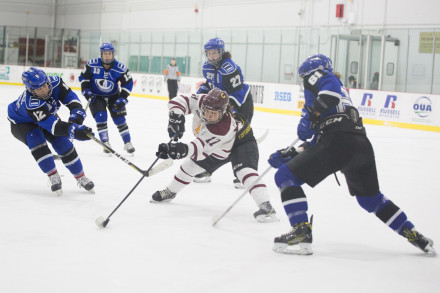 Two years later, in her second season as a forward on the Stingers, Dubois suddenly found herself on the same team as Belzile.

“The past is the past,” said Belzile.

The rivalry they once had in cegep transformed into a dynamic relationship of support at Concordia. When they are pitted against each other during practice, there is only healthy competition.

The players now live together as roommates, and are best friends. Their head coach Julie Chu, set up the living arrangement. They have conflicting schedules, so they don’t see each other too often at the apartment. Still, they coexist well on and off the ice, even when it comes to doing chores, they said.

“I didn’t hate her,” said Belzile. “She was good so sometimes it pissed me off because she made a good play.”

Belzile went on to say that now, their focus is the team.

Going from rivals to having a close relationship is something Chu has lived through herself. The former U.S. national team member is married to Caroline Ouellette, a former Canadian national team member whom she faced in three Olympic gold medal games and in several World Championship finals.

“Caroline and I have always been on rival teams, and that’s the tougher part of our relationship,” said Chu. “When you’re chasing after the same dream and the end goal of a gold medal, one has to win and one has to lose.”

“We didn’t like the Patriotes on the ice, but off the ice we respected them,” said Dubois. “Beli was good, she made for a good offense, so it was hard to play them.”

Both are accomplished athletes in their own right, it made sense that the two would cross paths on opposing teams. Their rivaling CEGEP teams always contended for the provincial championship and were no stranger to each other. In Dubois’ last game as a Titan, she lost to Belzile’s Patriotes in the provincial final.

“We kind of talked about it after,” said Dubois. “[Belzile] makes fun of me because she beat me, but this game was not about individual, it was mostly about the team.”

“On the ice is something else than off the ice, she was one of the best, she was the captain, so I was like, ‘Okay we need to watch Dubs,’” said Belzile. “In the end I don’t hate her, if I had to push her, I did, but it’s not because I hated her. Now we’re good.”

If they have constructive criticism to give each other, they never take it negatively, Belzile continued. They are there to help each other and to keep improving. 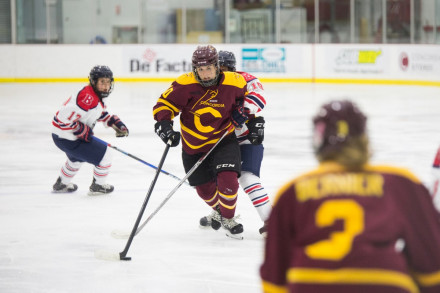 “Although Caroline and I played on rivaling teams, the same time, you are partnered with someone who understands exactly what you’re going through,” said Chu.

“They understand the ups and the downs, and the challenges that come with being an elite athlete, and the commitments that we have to make. I also think it bonds us in a lot of different ways,” she added.

The team is now in the thick of the playoffs. They just wrapped up a tense three-game series with the University of Ottawa Gee-Gees. Now, they’re getting ready to face the team that narrowly edged them for first place in the Réseau du sport étudiant du Québec.

The two hope they can help their team bring home the RSEQ banner.