For the first time in 34 years, the Concordia Stingers men’s hockey team is on their way to nationals.

The final seconds of the 3-2 victory over the York University Lions saw an explosion of confetti and the coaching staff jumping with joy on their bench.

“I’ve been waiting for this since I was a player here,” said head coach Marc-André Élément, who wasn’t alive the last time the program accomplished the feat.

The month-long playoff battle that saw Concordia up against four teams across two provinces certainly had a central figure.

Forward Anthony Beauregard, the recipient of Ontario University Athletics’ MVP award was not that central figure. Rather it was team captain Phil Hudon. He found a new level of hockey and carried his team across the finish line.

“I have to give credit to the leadership. Phil is an amazing leader. This guy is going to play in the American Hockey league right after leaving here. He’s a great leader and he’s well respected,” said Élément, predicting a very bright future for his captain.

Hudon managed 12 points in just nine playoff games—one shy of his regular season tally—second in all of Ontario University Athletics, and led the league in goals with eight over that span.

Hudon has said that for some reason, the playoffs just “awaken something” in him. That’s certainly been apparent. His offensive production has been matched by the usual grit and defensive strengths he’s always brought to his game. 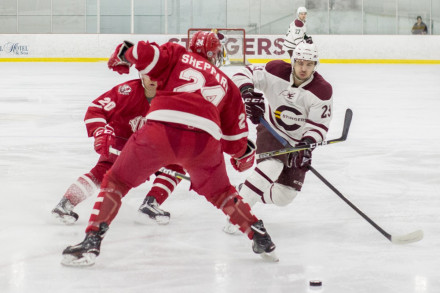 His unique blend of physicality and production don’t surprise his coach at this point. Élément has grown used to Hudon’s playoff performances this year and didn’t mince words when it came to evaluating his captain.

“He’s a playoff guy. He wants to be the best and he’s the best right now,” said Élément.

On a team full of young players, a veteran performing as well as Hudon is something to watch closely, according to rookie forward Jean-Philippe Beaulieu.

“I’m learning from him. He’s been leading us every game since the playoffs started. He showed it again with a big goal to start the third period,” said Beaulieu.

That goal was one that broke a 1-1 tie that had lasted through the end of the first period and the entire second. Hudon scored just nine seconds into the third and added a second goal eight minutes later, which would eventually be the game-winner.

As happy as he is with his performance, Hudon’s more excited about what comes next.

“I’m going on an adventure with 20 of my brothers so it’s going to be a hell of a ride,” said Hudon of his trip to Fredericton, New Brunswick for the U Sports national tournament next week.

This is a major step for the Stingers program. Élément is in his third year as head coach and has been building the team from the ground up, adding to their success each year. The team has gone from fighting to make the playoffs to a true contender under his watch.

“It’s fun, it’s been three years and it was not that easy to be honest. I had to make decision my first year about changing the culture,” said Élément. “Now we have a good culture and a good base. We’re one of the top teams in the country.”

Along with the seven other teams battling for the U Cup in Fredericton, Concordia’s men’s team joins their counterparts on the women’s side who are also headed to nationals and are also one of the country’s best, currently ranked fourth in all of U Sports.

“What are we? Top eight teams in the nation now? We’re talking about Canada, and we’re one of the top universities. It’s huge for the program, it’s huge for all of us,” said Hudon.

As bronze medalists in the OUA, the Stingers won’t be heading into the sudden death elimination tournament as one of the top seeds. That doesn’t worry the Stingers. They were counted out by many after losing stars from last season and became used to drowning out the noise and not worrying about expectations.

In Hudon’s words, it’s a “new season” and his coach knows that they can do some damage and show that they belong among the country’s best.

“We’re going to go there and cause a surprise,” said Élément.