“We just got beat […] we’ve just gotta be better,” said head coach Brad Collinson. His team had just lost a game by more than 70 points, there wasn’t much to say.

The Stingers had their toughest game of the season against the Université de Montréal Carabins. Offense, defense, special teams—the Stingers matched up badly in just about every facet of the game. They just got beat.

It’s not easy but the team is trying to stay positive and move forward.

“This is our job. As veterans we have to keep our head up,” said offensive lineman Maurice Simba.

After back to back wins and a decent first quarter, things looked better than expected for the Stingers going up against a top ten nationally ranked opponent. It was 3-3 after 15 minutes of play, the defence in particular was looking strong for Concordia. It didn’t last.

By the end of the first half of play, Concordia had managed only 62 yards of total offence, were down 22-3, and quarterback Adam Vance, who had wowed fans with strong performances against McGill and Sherbrooke, had only 5 completions.

It spiralled more and more out of control for the Stingers as the game went on. The second half featured a few nice starts to drives but most were interrupted by interceptions, (several were returned for touchdowns) and fumbles, (one on the opening kick return of the third quarter).

Vance had a rough game and didn’t finish the match. Rookie backup Maxime Bouffard looked no better as the pair threw a combined five picks.

The team knew the game was a loss well before the end.

“It gets to a point where you understand that you lost and the game’s done. The score just becomes irrelevant and you move onto the next week before the game’s done,” said receiver James Tyrrell.

All in all, it was a game that was emblematic of the Stingers place in their league right now.

“The game was ugly, but like coach says, it’s one game at a time. We have to forget about this game […] we have a lot to work on.”— Maurice Simba

The Carabins and the Laval Rouge et Or—the two teams that have beaten the Stingers this year—have been the top dogs for awhile now. Concordia had just come off of two strong and exciting wins against McGill and Sherbrooke only to be reminded that they are still behind the league’s top teams.

The five team Réseau du sport étudiant du Québec has been described as a race for third place at times. With the Rouge et Or and Carabins bringing in big football budgets and top recruiting classes, the last few years have always had those two penciled in for the RSEQ’s top two spots.

The Stingers have proved they can handle Sherbrooke and McGill, something that wasn’t guaranteed this season. With the departures of all-stars like Trenton Miller and Jean-Guy Rimpel, there were definite question marks around the team.

Concordia came out this season and Collinson showed that they were as good if not better despite those losses. Adam Vance and Jarryd Taylor led a powerful offence, the defence clamped down with players like Michael Sanelli. They showed they can beat back the fourth and fifth place teams. Unfortunately, they have yet to show they can do the same with the first and second place teams. 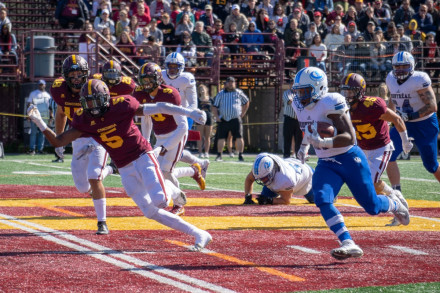 The Stingers’ loss keeps them in third place with a 2-2 record. Photo Elisa Barbier.

It’s entirely possible that things change in the second half of the season. Concordia could prove to be doing more than winning the battle for third place—a battle that still yields a playoff spot—and bring stronger performances against Laval and Université de Montréal in their second matches against them.

If that’s to happen, the team has some major improvements to make to avoid another loss like this one. If they want to escape the middle of the pack, it won’t just come from beating the team they’re expected to, they’ll have to surprise a few people and win the games they aren’t expected to.

To that end, the team is looking forward and is already preparing for a battle with the RSEQ leading Laval next week.

“The game was ugly, but like coach says, it’s one game at a time. We have to forget about this game […] we have a lot to work on,” said Simba.