The Kurdish Revolution is Anti-Fascist

Words from an International Volunteer in the YPG

A revolution was taking place in the Kurdish territories of Northern Syria known as Rojava.

The Kurds, a stateless ethnic group whose traditional territory stretches through the mountainous regions of Turkey, Syria, Iraq, and Iran, had built a revolution in the middle of the Syrian Civil War. They referred to their revolutionary system as democratic confederalism.

Democratic confederalism is a political alternative that is based on direct democracy, equality for all and ecology. It strives towards the end of ethnic and religion wars, a real equality between men and women, and a society directly managed by the people within it through neighborhood councils.

The Kurds are not looking to create a new country, since that would establish a new nation-state. The Kurds know that this is one of the main causes of conflicts, exploitation, and the rise of nationalism that can lead to fascism. The way that democratic confederalism sees the functioning of its system is through practice in local communities until it becomes the normal way of organizing and the state has been rendered useless. They don’t believe that they need an armed insurrection, but they keep the right to defend themselves against an attacker.

The Kurds started this movement, but through the years of war they gained victories and liberated many villages and cities from the Islamic State, also known as Daesh. In doing so, they gained the trust of non-Kurdish populations. It’s a trust that they earned—after having liberated and secured a city, Kurds remove their troops and let the local population manage it. The Kurds gave residents of liberated cities the choice to join the revolution or not.

Today, a large part of the Syrian Democratic Forces, the Kurdish-led coalition which was the main force behind the defeat of Daesh in Syria, is not Kurdish. In fact, the region known as Rojava goes by a different name, the Democratic Federation of Northern Syria. Rojava is a Kurdish word, and they wanted to remove this association to be more inclusive.

Symbols and acronyms of the Kurdish movement and their opponents in the Syrian Civil war. Graphic Carl Bindman.

What is so impressive about the revolution is that it was established while fighting against the brutality of Daesh, and being submitted to a supply blockade, in one of the most explosive part of the world, and it’s working! If it’s possible there, it’s possible everywhere.

Cities are now managed democratically while ensuring representation of the different ethnic origins of the inhabitants. Parity between men and women is established everywhere, including the army. So now you can go in a municipal meeting and see Arabs, Kurds, and Assyrians working together to achieve a common goal. Half of these assemblies are mandated to be women, as a measure to dismantle patriarchy.

According to the Turkish regime, we who built and defend this revolution are terrorists.

When I first heard about the revolution in 2015, the Kurds needed volunteers to help to fight against the Daesh, which was attempting to invade Kurdish territory. I was interested—I began to read up on Rojava and tried to get contacts to join them. It took a long time, but I was able to get in touch with some people in the the Kurdish militia known as the People’s Protection Units, or YPG.

By the end of August 2016, I was in Rojava. The day after my arrival, the Turkish army entered into Rojava to fight us. By drawing Kurdish troops away from the fight against Daesh, the Turkish army was supporting Daesh.

When we arrived we had a month-long training. It wasn’t only a combat training—we also learned the theory behind the revolution. Myself and two other foreigners joined a Kurdish unit that was waiting for the assault on Raqqa city, the capital of Daesh territory.

The Raqqa assault wouldn’t starts for many months. After waiting two months, we decided to go on another front so we could be more useful for the time we were in Rojava. While being redeployed, we learned that two of our friends had been killed—not by Daesh, but by the Turkish army. Their names were Robin Agiri and Zana Ciwan, they were two truly awesome people. As the Kurds say, şehid namirin, or martyrs never die.

The two of them had been taking a village controlled by Daesh near Manbij when Turkish airstrikes hit their position. Daesh was warned beforehand, so they fled behind to avoid being hit. And the Turkish government still says we are terrorists.

Shortly after I saw a doctor for an injury I got at the academy while training two months earlier. He told me that I needed to go home to get my knee fixed, it was just getting worse. It’s an awful feeling when they tell you you need to leave, and you just lost your first friends on the front line and you cannot help.

According to the Turkish regime, we who built and defend this revolution are terrorists.

Since February 2018, the Turkish regime has been attacking the canton of Afrin, the western part of DFNS. According to the Turkish regime, the YPG, YPJ, and SDF—those I joined—are terrorists. For the rest of the world, the troops I joined are not terrorists, but Daesh is.

This makes sense—it’s Daesh that is bombing civilians, raping women, and enslaving people. It’s Daesh that attempted to commit genocide against the Yazidi people, throws homosexuals off roofs, and drowns people in detergent because they smoked a cigarette. The list could continue for a long time. We were the one that won against Daesh, nearly eliminated them from Syria, and built a democratic confederalist revolution in their place.

Daesh, to be able to get their weapons, money and troops, has strong relations with the Turkish state. Nearly all of Daesh’s oil and cotton was sold to Turkey, a lot of their weapons came from Turkey, and their troops reached Syria by travelling through Turkey.

This all make sense for the Turkish state. It’s an authoritarian regime that wants a “nation” composed only by one people—Turks—negating the existence of minorities such as Kurds, Armenians, and others. Turkey’s current president, Recep Tayyip Erdoğan, abandoned secularism and has brought back an extremist form of Islamism in the state.

Any critique of the regime will put you in jail. Hundreds of journalists are incarcerated by the Turkish state for critical reporting. This repression of dissent, its contributions to the rise of Daesh, and its internal wars against minorities clearly makes the Turkish regime a fascist one. And it’s dangerous—the Turkish army is the second largest army of NATO.

Erdoğan is clearly dreaming of bringing back the days of the Ottoman Empire. Today, Turkey is the fifth largest trading partner of the European Union and a central point for global exchange due to its location between Europe, Africa and Asia. 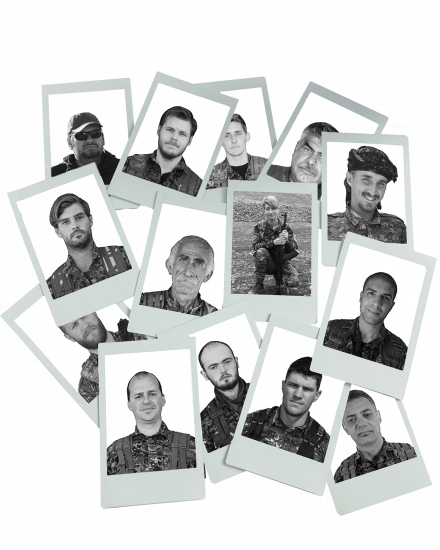 Some of the international volunteers who have been killed in battle fighting alongside the Kurds. Graphic Aiden Locke.

In Turkey’s attacks on Afrin, hundreds of civilians are dying. It is estimated that over 150,000 people have been displaced by Turkish attacks.

Despite all this, comrades had resisted courageously. We don’t have anything to defend ourselves against Turkish airplanes, and the enemy is much more equipped than us. But our troops were still bravely resisting even if we were losing ground, in the hopes that a country will make a move to stop the fascist Turkish regime assault.

Sadly, this invasion has forced the Kurds to remove 1,700 troops that had previously been fighting against—and nearly eliminated—Daesh, to send them to reinforce Afrin. Again, the Turkish army is helping Daesh, who could now use this situation to counter-attack the Kurds and regain strength. If this happens, it will have been Turkey’s fault—but western governments, including Canada’s, too, since they could stop it simply by enforcing a no-fly zone over Afrin.

Even the Syrian regime, which is far from being our ally, have now joined us in the war against the Turkish invasion. They have done the same with their 1,200 troops that were on the frontlines against Daesh. They know they could be the next.

On March 18, 2018, the city of Afrin fell. Turkish airstrikes were so intense that the YPG/YPJ decided to evacuate the city’s civilians and withdraw in order to avoid more civilian deaths. On the last day before the city’s fall, over 100 civilians were killed. It is a terrible loss, but it is not our first one.

The YPG/YPJ are now forced to change their strategy. They are engaged in guerrilla war in an attempt to force the fascist invader to withdraw. They hope that this strategy will render the Turkish air force, its most important tool in the war, useless.

Only months ago, the world was applauding the Kurds and their allies for their brave resistance against Daesh. Now the world is silent as another fascist army is killing those same heroes.

For them it seems the Kurds have filled their role against Daesh, now they are useless. Other countries also don’t want a direct military confrontation against this fascist regime, or to lose their economic relations with Turkey.

Sooner or later, though, it will need to happen. The Turkish regime wont stop after Afrin. The fascist Erdoğan already said he would continue with Kobane and Qamişlo. The Turkish regime has already provoked European countries by threatening that they could take “Germany in three days and France in one hour.”

Maybe the other countries should remind themselves that the cost of inaction against a fascist regime was once the Second World War.

Meanwhile, the YPG-International has called for international solidarity. They are asking the good people of this world to support them and raise awareness of what’s happening there. The hope their initiative is bringing, and the threats their enemies represent, needs to be defended at all cost.

Locally in Montreal, initiatives are being planned and a lot of help will be needed. Get in touch with organizers to get involved, and even to organize some events. Conferences, demonstrations, picket lines, blockades, and more—everything is needed, and it’s needed urgently. I organize with Rojava Solidarity Montreal, and would encourage you to find us and help out.

Yesterday the Kurds spilled their blood to defend human values and get rid of barbarism—not only for them, but for all the world. Now they continue, but they are asking for our support more than ever, let’s not disappoint them.