The Heaviest Branches of the Family Tree

On the Role of Heredity in Mental Illness

All Mental Health content is available on our Special Issue Microsite. Works best on Chrome or Firefox.

I was in my early twenties when I learned that my grandfather had committed suicide. I had never met him, but for as long as I can remember, I had just assumed his death was the work of a heart attack or old age. No one had ever spoken up to correct this with the more painful truth.

When my older sister accidentally let it slip, her eyes gaped.

Over two decades of silence on the subject made it seem as though, suddenly, my ordinary family was not so ordinary. There was this sudden exposure of a dark secret, something my parents had kept from me—on purpose. Were they embarrassed by such a tragedy? Or had they done it to keep me safe?

I’d like to think it was the latter. Even before I learned the truth about my grandfather, mental illness has been a long-time resident in our home. My youngest sister was diagnosed with OCD before she was 10 years old. As for me, I thought I was perfectly fine, until I cracked one day at the age of 17, in my first week at a brand-new job.

Crying, breathing like a frightened locomotive careening for a cliff, I kept pulling myself together, only to fall to pieces again minutes later in a crescendo of sobs, late into the night. I quit that job and went into therapy almost immediately. I would later be diagnosed with an anxiety disorder and social phobia, which I still contend with to this day.

So when I learned that my grandfather had taken his own life, something clicked in my brain. I was not the first in my family to be at the mercy of their own mind.

Had I inherited this sickness from an earlier generation? Were the seeds of that nameless, creeping fear and chemical instability in my very blood? 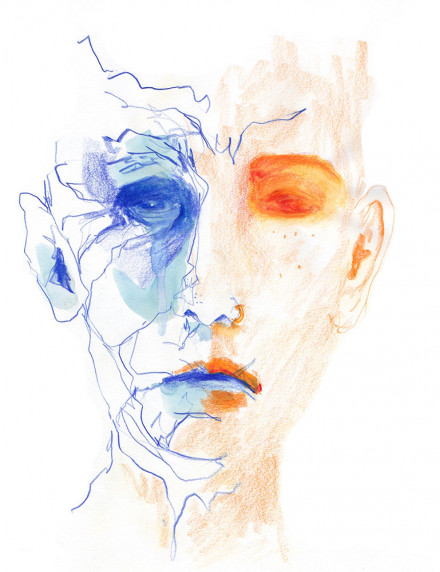 According to an article published by the National Institute of Mental Health in March of last year, five major mental disorders, including major depression and bipolar disorder, were found to have a common genetic link. People suffering from these disorders tended to have genetic variations in the same four chromosomes. The article went on to say that although this discovery was statistically significant, the discovered genetic variation plays too small of a role in the risk of mental illness, and is therefore not very useful for diagnosis or prediction purposes.

Still, my grandfather grew up in a time when it was even more taboo than now to talk about feelings that were odd or unsavory, let alone to be tested for anything mental-health related. He and my grandmother had both survived the Second World War. All my mom ever told me about him was that he was a man of few words who would often sit quietly in the dark.

He never said anything, and my family never saw it coming.

From the moment I had my first panic attack, my mother’s motto was, “Getting help is a sign of strength, not one of weakness.”

I think it had roots in her father’s choice. In the grim light of learning about his suicide, every move she had ever made looked like it was done to prevent history from ever repeating itself. To her, every tearful teenage threat I have ever made, every terrible mood I had ever projected must have seemed like a desperate distress call. Every screaming match and slammed door would have said something insidious and unspoken: Look at what happened last time.

It’s a fact that mental illness is more likely to be passed down in families, but it’s not guaranteed that if the parents have it, the children will too. Experts insist there are some environmental, personality and other factors that contribute to the origin of mental disorders in an individual.

Once upon a time, I suffered from the thought that if I ever decided to start a family of my own, my kids would one day have the same nameless, surprise-attack breakdowns I used to be prone to on a regular basis. Even this is an unfair assumption.

In fact, for all of our quirks and instabilities, my younger sister and I stand in contrast to our eldest sister, who navigated the mental minefield unscathed, perfectly normal.

As the saying goes, you cannot pick your family, and it might be unfortunate, but you don’t get a say when it comes to your genes either. Until a time comes when we can predict with certainty that someone will have a mental illness, there can be no real way to know. Our genes are still a language we aren’t yet fluent in, so there is one other element of the family that is key when it comes to this modern epidemic: support.

The Canadian Mental Health Association says that “[m]ental illness indirectly affects all Canadians … through a family member, friend or colleague.” If it’s not you, there’s a chance you know someone who has been affected.

What I’m saying here is that this is not just my fight, my sister’s fight, my mother’s fight, or my grandfather’s fight. It’s a struggle that belongs to all of us.

If you know someone close to you who you think might be suffering from a mental disease, the best thing you can do for them is to let them know you’re there, and encourage them to get help. Support might not be a cure, but a raised voice might be the difference between a success story and a family secret two decades old.

If mental disorders have made homes in our genes, we need to make room for them with open minds, and open arms.