“We knew the competition would be good,” said Syracuse head coach Paul Flanagan. “I think we get more out of these three games than we would in ten days of practice, because you’ve really got to compete.”

The X-Women (Atlantic University Sports) sat in sixth place nationally in the most recent U Sports top 10 rankings, while the Stingers fell just behind them at number seven. The Nipissing Lakers are currently fifth in the Ontario University Athletics division of U Sports.

The Orange, an American NCAA Division 1 team sit third place in their division with a 4-3 conference record. The three-day invitational saw each team play each other once in a round robin format.

“There’s a good reason we do this now and it’s to knock off rust and do what we need out of the holiday break,” said Chu. “We get to shake up lines and play different people in new places and learn for the second half of the season.”

The weekend was dominated by the Orange and the Stingers in every aspect. In the first two days of the tournament, they combined for eighteen of the total twenty-one goals scored and were a force to reckon with in their games against the X-Women and the Lakers.

The final day would end in a head to head game between the Orange and the Stingers in order to crown the unofficial winner of the invitational. The game ultimately ended in a 6-1 rout by the Orange, where the Stingers found themselves trailing for the first time all weekend. 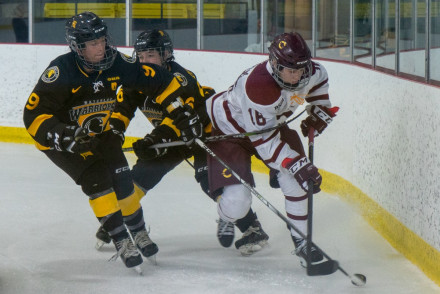 The weekend long tournament offered a chance for each of the four teams to play each other once in a series of non-conference games. The Stingers took the first two of their three matchups, only to fall 6-1 to the NCAA Division 1 Syracuse Orange. File Photo Elisa Barbier

Leading the scoring charts were three Syracuse players: Emma Polaski, Abygail Moloughney, and Anonda Hoppner—who also got herself a hat trick in game two against the X-Women—each managing three goals apiece. This was amongst the seventeen goals scored by Syracuse throughout the weekend on 96 total shots, the most of any team.

On the Concordia side, Marie-Pascale Bernier, Audrey Belzile, and Amelie Lemay led the team with two goals apiece. Brigitte Laganière and Lidia Fillion combined for an extra two goals on the weekend to bring the Stingers to eight goals on eighty-six total shots.

“These games are important to win for us but whether we lose a game at this point is not as important as the regular seasons,” said Chu following the tournament. “Overall our power play wasn’t good over the three days. We just weren’t very good in a lot of areas.”

The X-Women and Lakers found themselves on the wrong side of the stats sheets, totalling four goals and coming up with 32 penalty minutes each, the highest among all teams. They both also averaged less than 25 shots a game over the course of the weekend. The X-Women would win the head to head on the final day to place third overall, with the Lakers claiming the last place spot.

“We feel that the [U Sports] schools get geared up to beat the NCAA teams, which is good because it’s what we want,” he said. “It’s nice to get up here and get away from Syracuse, not worry about the NCAA games and just play. Obviously we’re happy, we won all three games, but more than that, we did some team bonding.”

The Concordia Stingers women’s hockey team will return to regular season action on Sat. Jan. 12 against the McGill Martlets at Ed Meagher Arena.