Exploring the Lives of Metro Artists

Everybody loves the mirrors in the Atwater metro tunnel—the ones facing each other, where images repeat into infinity. Standing next to infinity is George. Well, his metro name is George—his surname is Gordon.

Gordon is straining into his saxophone, the straps pulling tight against his baggy shirt. He plays a lilting jazz that has a restrained kind of dignity—maybe a product of his age.

Gordon is 84 (but he looks 83) and has been playing the saxophone since he was 10. He says it’s too long of a period of time to play music, but he persists.

“It’s something you give to others, not yourself,” Gordon says between songs, in an island accent.

He’s from Trinidad. He learned to play there, led a 16-piece orchestra, joined the service and led the marching band too—now he’s here in the metro.

“It makes me feel good, and I’m giving them comfort,” Gordon says. He means the people who walk by, paying little mind to him and his saxophone. He grips the instrument, aged to a ruddy silver, close and he shrugs. “Some that pass with they problems, they don’t even hear the music.”
Nevermind the passersby, you have to play for yourself, he says. Except, “if the people aren’t enjoying, what’s the point? If nobody enjoy, there’s no sense in staying here.” Gordon stays; people are enjoying.

“Music,” he says, “speaks for itself.” A man walks past, snapping his fingers, but gives no money. “Street musicians,” Gordon says, “is broke musicians.”

Another broke musician comes by and nods at Gordon, pulling something from a crack by the mirror. The man writes something on it, puts it back and leaves. It’s a list.

Every spot that buskers play, in the metro at least, has one like it. The first busker of the day brings a piece of paper, writes the date and their name down and then stashes it somewhere. For any would-be busker, they have to scribble their name with the time they want to play on the paper; otherwise, they’ll get in trouble with their peers. These slips are hidden from commuters.

The slip at Guy-Concordia is hidden behind piping, above an ad. A heap of clothing in a backwards cap holding a clarinet goes and extricates the sheet. The air smells like pizza fried in butter.

It turns out that the heap of clothing in a backwards cap holding a clarinet is actually just a person in very baggy layers. 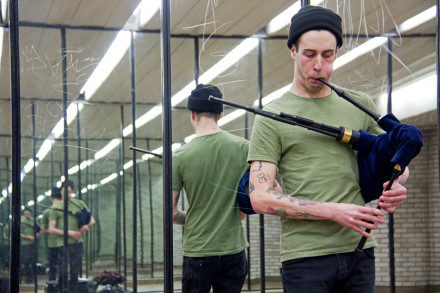 
His name is Cristian Velasca, and he plays short loops of well-known songs, like “The Star-Spangled Banner” three times in a row. He enjoys it, Velasca says, but that’s not why he does it.

“I need income to buy food,” he explains. Busking was good once, but apparently since 2010 it’s been downhill—now, he rarely makes more than $11 in a sitting, which can vary in length. Once in a blue moon, it will be $25. Velasca says he receives welfare, but it isn’t enough. “Everything is so expensive.”

A young woman walks past and pays a kind compliment, dropping a smattering of change.

“People know that I’m not very good,” Velasca says. “But I’m not just good. I’m in between.”

Velasca, like Gordon, has been playing for a long time—five years in Japan, nine years on the Holland America cruise line, 11 years in the Philippines in an orchestra. Now, he plays the metro.

Metro stations are constantly inhaling and exhaling hundreds of people who ignore people like Velasca—most don’t even look at him. Between cars, he takes his phone out of his enormous jacket, anxiously checking the time. The next musician might be late, but Velasca has to keep going—he has to buy food, after all. He plays again.

WHERE HAVE ALL THE CABARETS GONE?

Back at Atwater station, a Chinese man plays the accordion.

Sitting on a wooden chair that trembles as he rocks back and forth with his instrument, the man smiles at every person that passes. He plays classical Chinese and European—a mix of the idyllic rural history of two continents. Many people give change, one even buys a CD. To each he nods, smiles even bigger, and says “xièxie!” 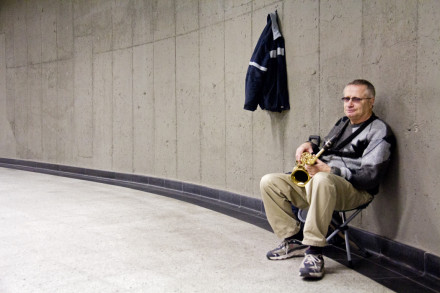 
Eventually a younger woman stops, and the two strike up conversation in Mandarin. They look at me, and the man gestures over.

“I translate for you,” the woman says.

The man’s name is Jiang Bin. Jiang Bin is from Dalian, a large city on a peninsula in the Bohai Sea. He has been here in Canada for four decades, but just returned from a vacation back home.

When asked why he plays in the metro, Jiang Bin smiles quizzically, then replies. The woman translates: “otherwise, where to go?”

A group of skateboarders, seeking refuge from the cold, install themselves nearby, opposite us. They roll towards the traffic and ollie down the stairs. It echoes through the tunnel.

“There is no other place to perform this music,” the woman continues.

Jiang Bin shows me a picture of him and the Mayor. He played from a car’s sunroof in this year’s Canada Day parade, and on a visit to Chinatown, Coderre recognized him.

Just then, the driver of the Canada Day car arrives in the tunnel with his violin. His name is Yang Xinya—it means tree under the horse, he says. It’s Xinya’s first time playing with Jiang in two months.

The woman leaves, and the two start to play, ripping into a vicious polka—an old man with a cane roars out the forgotten words as he hobbles by. The skateboarders dissipate.

“The voice here is best,” Xinya says. “The acoustics.”

The tunnel at Atwater, buskers agree, is the best place in the metro system to play music. Donald—another metro favourite, who does endless country ballads on a nylon-stringed classical guitar—says this.

“I used to play in hotels,” Donald says, “in clubs and cabarets.” He has a pacemaker now, so the stress of the stage is too much. Donald shakes his head, his white hair slashing a male-patterned arc around his face. Clubs play a very different kind of music today—and real cabarets don’t exist.

The next day, another man sits against the mirror, with his eyes closed, clapping his hands and singing a gentle song in Spanish. His name is Eddy Lopez, and he’s from Cuba.

Lopez has a kempt grey beard that darkens to charcoal at the fuzzy tips. He wears his age with character and grace. He has no choice. 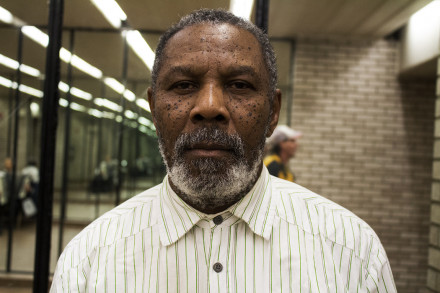 He was a musician back home, a composer, and he only sings the songs he likes—his own work, and Cuban tunes from the ‘50s. Lopez had a band here in Montreal, the Martinez Joe—they played in a club together, for years, until new neighbours complained about the noise and shut it down.

“I played guitar. I played piano. I’m a musician,” Lopez says. He can’t play anymore, he says, as he holds up his hands. “Arthritis.”

But music is his skill, and he needs to employ it because, although he’s on welfare, his pension hasn’t started yet. So he sings in the metro, claps his hands and closes his eyes.

“I play to help myself, and to please others,” he explains. “I send a message: let’s share in music.”

ON A COLD MONDAY AFTERNOON

Someone sits at the entrance to Place des Arts metro, talking to himself. His eyes bulge, his arms jerk, occasionally he throws his head back in silent laughter. Commuters hurry by, giving him space.

Across a sea of stained teal tiles, a group of homeless people huddles by the other entrance. Some lean on the wall, some sit on the floor. They are too cold to ask for money;ß their mumbles are ignored.

In the middle, between the coming-and-going crowd, is a mural. Maybe you’ve seen it—ornate stained glass, vivid colour, landmarks of Montreal and its history.

Marie Lou Tremblay stands next to it, wearing layers of black—a leather skirt, woolen socks and long hair. A vinyl flower propped beside her, a cloth with her CDs on the ground before her, a poster in the colours of the STM just behind: “J’aime, J’apprécie,” written under her name.

A small speaker on Tremblay’s waist pumps out a lattice of classical and jazz. With her flute, she builds familiar melodies.

She can play sad music. It’s not winter, yet, but it’s the first day that feels like it.

Tremblay is an Étoile du Metro—that’s what the poster behind her says. She pays—and had to audition—for the privilege, but now she’s guaranteed prime locations as long as she plays at them. “I don’t need to arrive at 6 a.m. for the slip,” Tremblay says, a smile crinkling the lines by her eyes. “I
can register online.”

It’s easy to see the appeal of a more regimented system to a woman who is performing alone in the metro—there are fewer women buskers.

“It’s easier this way,” Tremblay says. She doesn’t have to organize band practices, she can play what she wants, she can keep all the money. “I have another profession, so I can do this on the side.”

A kid in a pink snowsuit stops her mother and gestures for coins. She runs up to Tremblay and leans over the scarf on the ground—in the unbalanced stance of the very young—and lets the change fall. Tremblay kneels and performs a solo for the girl, who dances away, laughing.

After the homeless people in the corner disperse, after the man on the stairs vanishes, Tremblay is still there playing. Sometimes, someone will pass and give her change. But, like the rest, they keep walking without looking back. She doesn’t seem to be phased by this, like many of her fellow buskers.

“That’s just how the metro is.”