The night of Feb. 21, down Saint-Laurent Ave., 10 faces crystallized on Café Cleopatra’s aging stage for Afro-Drag. Dimensioned by glitter, colourful locks, and lingerie, the performers dripped through the seams with dance, poetry, and music.

The Afro-Drag artists uplifted the vintage show-bar with their confidence and artistic expression.

As Athena Holmes sharpened an eyebrow with green pigment at one of the bulb-framed vanities backstage, they sighed, “it must change.” Gradually, through a cloud of make-up powder, their stage persona BiG SiSSY appeared in the mirror.

“There was [the drag queen] Barbada and two other artists performing regularly, but I was just astonished. There were no [other] Black performers [in Montreal] doing drag,” SiSSY, the host, performer and curator of the event, admitted.

Afro-Drag was created to try to change this narrative, as SiSSY had hoped for.

“The point of [Afro-Drag] was to get Black performers in Montreal to take up space on the drag scene,” explained SiSSY. “I’ve been performing here for years and there’s never any Black people in this space, so I wanted that to change.”

“If you go into it alone, […] you’ll end up being the one token person of colour,” Rae explained. “You might be more hesitant if you’re the only person represented.”

Together with SiSSY and alongside a team of other organizers, they successfully put together the first known Afro-Drag show in the city, as part of McGill’s Black History Month line of events, and rid the drag scene of tokenization for one night. 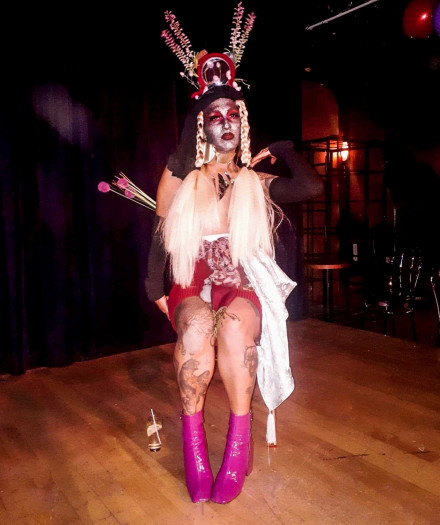 While the initial need to create Afro-Drag was to introduce Montreal to Black artists, the show also featured those who strode away from the usual conventions of drag itself.

“[Tonight], there are people of various genders. Actually, I don’t think there are any cis men in our show tonight. That’s different,” SiSSY said.

For SiSSY, drag is about, “freedom of expression and an unapologetic [attitude]. Tapping into a part of yourself that you wouldn’t normally give yourself permission to be so extra.”

“The term drag is really loose,” SiSSY continued, and was also applied loosely to the event.

Rae explained that Afro-Drag did not strictly follow common ideals of the hyper-feminine or classic costuming of it.

SiSSY’s drag style is, for example, “high femme and a bit of club-drag,” they described. The queer femme reminisced on the 1980’s New York drag scene for their inspired look, “[like the] club kids […] who just dress in really extravagant costumes and blurring the lines of gender and performance art.”

Alternatively, first time drag performer Slam Grier appeared in an astral, otherworldly-look that she described as her working with “afrofuturism, [the] future imagined by people of colour outside of white boundaries.”

That night, Grier performed a poetic piece which dove into other dimensions with her futuristic character. According to her, drag allows her to explore deep desires by manifesting them through her appearance.

“We were trying to tell people [that Drag] can be anything,” Rae said.

Because, “the whole show is nonconventional drag. There’s some poetry, there’s lip syncing, there’s just music and movement,” she continued.

“Go up there. Read your favourite poem in the best outfit you have. Do your face up.” Rae also quoted RuPaul, despite her mixed feelings towards RuPaul’s Drag Race: “we all came into this world naked. The rest is all drag.”