That notification sound haunts my nightmares

Developed in 2009, the social media app Grindr has come to be the bane of my existence. Grindr is a hookup app used primarily by queer men. Get connected, get laid, get back home.

What seems like a harmless hookup site is actually a problematic hellscape of discrimination, vitriol, and violence, which is why you should delete it.

I cannot count how many times I have deleted and redownloaded Grindr. Between random bursts of late night lustfulness and moments spent in search of validation, my default has always been to check the app. It has been a certified toxic environment for me, but I continue going back.

As a fat person, I’ve grown accustomed to the hateful messages that are commonplace on the platform. As intense as these hateful messages get, I also receive chats from fetishistic perverts who are only attracted to fat people. It’s spectacularly awful here.

Notwithstanding the dozens of issues plaguing Grindr and its millions of users worldwide, one of its most prominent ones is the racism permitted on the platform. As chronicled by blogs like Douchebags of Grindr, men of colour are far more likely to receive hateful messages than white men. Slurs and derogatory attacks are sent to millions of people daily because of their race.

Before it was removed in late 2020, you could pay access to an ethnicity filter. This could have been seen as beneficial for some men of colour—who might have needed that tool to keep themselves safe from certain circles roaming the app—but this feature had routinely been abused by racists and fetishizers alike, only worsening Grindr’s racism problem.

Some settings that are still available, however, include weight and body type. If you have been on Grindr at least once, then you have probably come across this type of bio: No fats, no fems, no blacks, no spice, no rice, no condoms, no body hair and the list goes on. The problematic preferences of these narcissistic muscle twinks make even the Ancient Greek philosophers’ preferences look diverse in comparison.

Speaking of which, I would be remiss if I did not mention another one of Grindr’s glaring issues: the disparities in age. As a 19-year-old, I have received more creepy messages from men who are my grandparents’ age than I care to admit. The behaviours of these men are predatory and borderline pedophilic. The app needs better safeguards against these kinds of interactions.

The way its age settings work in general needs major revamping. Grindr lets you set the age range you desire, but this setting is only a one-way street. If a 20-year-old only wanted to view men around his age, he could make it so. But a 60-year-old could also adjust his settings to show 20-year-olds, and Grindr won't block those messages from going through.

Another area where major measures need to be put in place are in age requirements for young users. I have seen many underaged boys using the app, which is extremely saddening. I should know—I was doing the same at 16 and 17.

If you come across the profile of a minor, for their benefit and yours, report the account. Queer teenagers often have less real-life romantic opportunities than straight people, so many are pushed onto these apps. By using apps like Grindr, they can be put in grave danger. Clicking a button that says “I am 18 years or older” simply does not cut it.

I know I deserve better, and so do the other millions of queer people putting up with this misery-sex-misery conveyor belt of an app. If we want to better ourselves, improve our self-esteem in real ways, and make healthier connections, we should all delete Grindr. 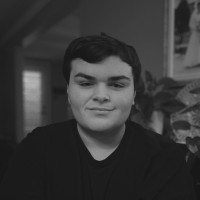 Zachary Fortier is one of Vol. 43's news editors. He loves charcuterie boards and gossiping.