What was the biggest game of their lives turned into a lucid nightmare when the buzzer rang on a 63-51 loss to the McGill Martlets in the Réseau du sport étudiant du Québec women’s basketball final.

The dream turned bad early in the first quarter, when Concordia was shutout 11-0 until the two minute mark. Richelle Gregoire managed to finally put the Stingers on the board with a three-pointer.

“We were coming down with empty possessions and when you are, you dig yourself a hole at 11-0. That’s a tough climb,” said Stingers head coach Tenicha Gittens.

Standing on the sideline of the losing side, Gittens attributes McGill’s win to three things: Energy, effort and intensity.

“McGill was the team that came up with the effort and the energy,” she said. “When you have a veteran team like that, they’ve been on this stage before and the one thing that you can control is your energy, effort and intensity.”

Graduating guard Richelle Gregoire, playing her last game with the Stingers, led the game in scoring with 21 points. She helped her team get back into the game but her efforts were for naught.

“We had 18 points in the half, but we can’t win a game like that when there’s one person scoring,” said Gittens. 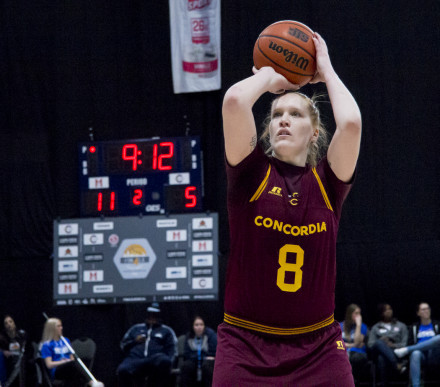 “For me personally, it was the nerves,” said Roy-Viau. “I kept looking at the clock instead of playing the game that I usually play.”

How does she want to be remembered by future generations? “Not as second place team, that’s for sure.”

With the cup in hand, the McGill Martlets now head to the U Sports national championships at the University of Victoria, in British Columbia.

McGill guard Marie-Love Michel, who finished the game with a 15-rebound, 10-point double-double, is proud of the Martlets’ success this year and likes her chances out west.

“I’m really proud of this year because it made us realize how good we are and if we work hard every game, we could beat anyone in the country.” she said.

The weekend was capped off by a clash between the McGill Redmen and the Université du Québec à Montréal Citadins in the men’s final.

After UQAM’s surprising ousting of second seed Concordia less than 24 hours earlier, they were looking to extend their season just a bit longer and head to the national tournament.

Early on, UQAM looked just as confident as they did against the Stingers in the semi finals. They closed out the first quarter down 19-16 to the first place Redmen, and managed to keep the game close by continuing their impressive rebounding. They outrebounded McGill nine to six in the first quarter, despite the Redmen being the taller team.

From that point on, though, McGill had other plans. They connected on five three-pointers in the second quarter—two of them coming from backup guard Isaiah Cummins—and got out to leads as large as 11 points.

“I have a team full of veterans,” said Deaveiro. “Sometimes, they kind of coach themselves. They’ve been playing together for a long time, and all the credit goes to the guys. They’ve embraced the culture. You have to be all in, you can’t have one one foot in and one foot out.”

By halftime, McGill was leading 42-32, and the game didn’t get much closer from that point on.

Greishe Clerjuste led the way for UQAM with a game-high 24 points, while Jennings Leung led McGill with 15. McGill’s Dele Ogundokun was was honoured as the game’s MVP, and was given a pair of headphones as an award. He immediately went over to give them to Leung, whom he thought more deserving. 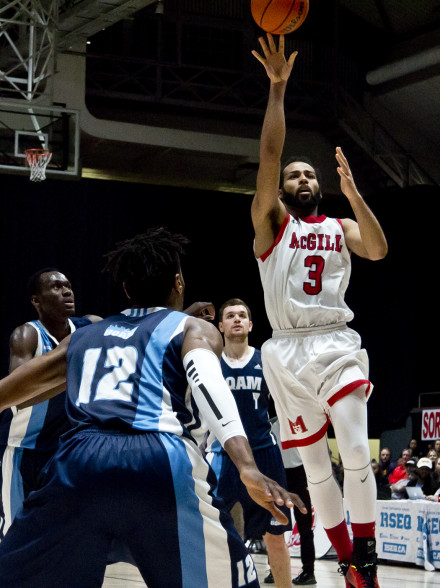 McGill guard Dele Ogudokun goes for a layup. Two of his 13 points in the game. Photo Brian Lapuz

“I felt like he deserved it, it’s not just a one man sport,” said Ogundokun “We play as a team and our team is special because we have weapons from all over. I thought he deserved the award the most, but we all got it done and now we’re off to nationals.”

Both of McGill teams managed to defend their RSEQ titles from 2016. The Martlets and Redmen will be headed to the national tournament.

“I’ve been to two nationals and have never had good luck with it,” said Ogundokun. “We’ve always gotten eliminated in the first round. We’d like to get over that hump and keep it rolling from there.”