Personal Narrative: Delving Into the Reality of Life as a Trans Woman

It was at the very young age of five that I asked my parents, “Am I a boy or a girl?”

In the corner of the living room, my dad was seated with his typical stern look locked on his face, only this time my young self perceived a hint of apprehension through his stare. Then with a worried look, mother asked me “Well, what do you see yourself as?” I still remember the ball in my throat and the heavy fear of disappointment creeping up on me. I longed to be normal so bad I forced myself to lie to my mom and “admit” I was a boy. Though at the time, I still clearly knew something was heavily off balance. 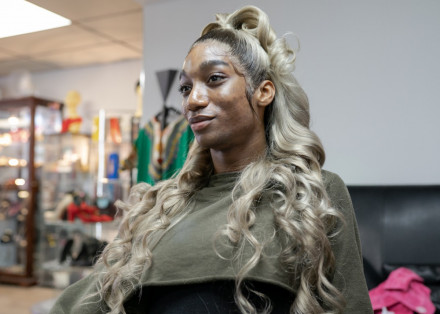 Eve Adrienne right after the pose of her sew-in weave at The Beauty Shop in Lasalle. Photo Elisa Barbier

On Sept. 15 1997, yet another basic, nitpicky, anxious, semi-narcissistic Virgo was born in a warm, sunny city in the south of France named Perpignan. I was raised as a boy between the hot, sandy streets of Africa in Niger, and the cold, somewhat freeing harsh reality of France. In the latter, there was a freedom from some of the religious restraints I experienced in Niger, as it is primarily a Muslim country. However, it was harsh being now back in an environment I had no memory of and it resulted in me being very disoriented.

Growing up was a rocky experience, as gender dysphoria manifested at early stages of my life. It left me unable to connect with the outside world since I didn’t have a proper relationship with myself.

I avoided internal conversations for the longest time from fear of judgment. I feared it coming from my family, coming from God or coming from the world around me. I also feared that I would find out things about myself that would be very difficult to accept. 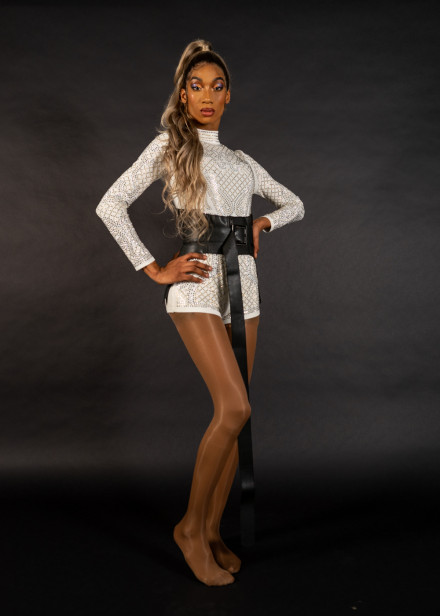 I developed survival abilities before I developed emotional abilities. The loneliness and the incessant bullying I experienced in my younger years had caused me to escape into a reality in which I lived to be a beautiful, stunning, good girl. Through that girl I could do all things, and through that girl there was life. When it all became too overbearing or when I’d be left to my own devices, I would immediately retract into that world. That was my perfect reality.

It did sometimes cause me to go long periods of time avoiding my reflection, as the sight of my young male body would knock me back down to this unfair reality I felt stuck in. I felt trapped and restricted inside my own body.

I would sneak upstairs, steal my sisters’ clothes, dress up and then lay under my covers so that no one would catch me. Only then would I feel free. Only then would I allow myself to love myself. At the time, I didn’t realize what it may imply. I had no idea what any of it meant.

Then one glorious day, after all the battles and wars I fought in my teenage schooling years, life eventually led me all the way to Montreal. Well, I basically forged myself a path to Montreal to be as far as away from my home country as possible. I wanted to start fresh, I craved new beginnings, so I flew an ocean away. Here I established my life as a student, a party queen, a barista, a shift supervisor, a friend, and most importantly, as a woman. 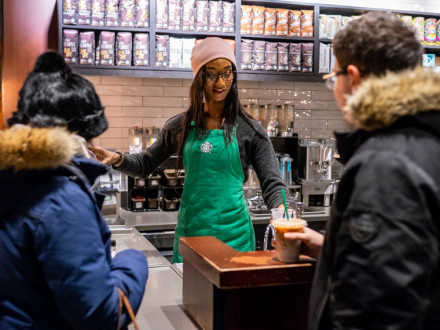 Working in customer service can be a challenge for Adrienne as she perceives people reaction to her identity. Photo Elisa Barbier

When I first moved here and all of a sudden had access to all of this freedom, I was almost frozen. I was so used to holding back everything inside, but now I could let it all out. I didn’t know where to begin.

The first thing I did when I was away from everything I’d ever known was bleach my hair. I remember wanting to look as different as I had ever looked before. I wanted to detach myself from the old me. Then came the outfits. I started being bolder in my fashion choices. Some days, I’d pull out a sickening outfit. Other days, I’d head to the university’s cafeteria in my bathrobe. Because for the first time I felt safe enough to express myself, I forgot how to hold back. Next thing I knew, I was parading the streets as a gay man in makeup. And I did feel semi-comfortable, for a bit. However, even then I knew I wasn’t going as deep as I needed to. 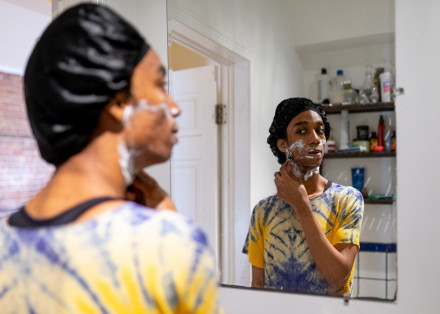 Adrienne shaves everyday after washing her face ahead of her morning routine. She mentions how many people believe trans women do not need to shave. Photo Elisa Barbier

The “gay man in makeup” era only felt like I had scratched the surface. Fast forward to another couple years of deep reflection, and I finally made the decision to come out to my friends as transgender. At that point, I still hadn’t fully grasped the depth of it. In the beginning, I used the term very loosely. Because I was terrified of telling people about my hidden womanhood, I remember throwing around the term non-binary.

I had been previously outspoken about stereotypes and not fitting in with labels. So, labeling myself and demanding for others to also see me as a woman almost felt hypocritical of me.
Looking at it now, those feelings of denial were the result of suppressing my true self for almost two decades. I wasn’t confident enough in this “new person” I was attempting to be. I fell so easily in the trap of what people think a woman should look like. Before I even thought of starting hormone replacement therapy, I already had a corset in my closet. To this day I find myself doing the most just to be passing. 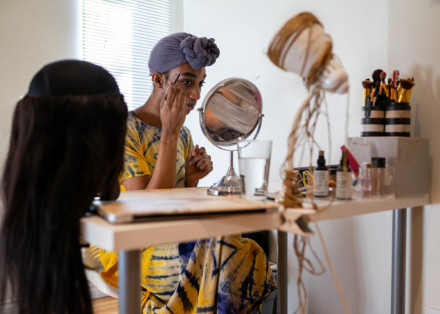 Cleansing, shaving, hydrating, and contouring are just a few steps of Adrienne’s daily morning routine. Her routine usually takes around two and a half hour. Photo Elisa Barbier

It takes me a total of two and a half hours to get ready before each shift: 15 minutes for skincare, 45 minutes for hair, one hour of makeup and about 30 minutes to put my outfit together. And even with all of that, I cover my face when I speak, smile or laugh because I’m terrified someone will catch me at a bad angle. I avoid spotlights or direct lighting because I’m afraid someone else is gonna catch me under a bad light that highlights my five o’clock shadow.

Before I had access to medical help and before I had the resources to reach a real doctor, I fell in the scary trap of black market hormones. I bought estradiol patches, which I started to wear quite often without being mindful of the dosage or anything of the sort. Hormone replacement therapy requires blood tests to ensure your vital organs are healthy through the transition. And here I was risking ruining my body, and for what? Months of sickness ensued before I made the decision to stop it and get real help. It got really low for a moment, and I did think I was not going to make it out of it. 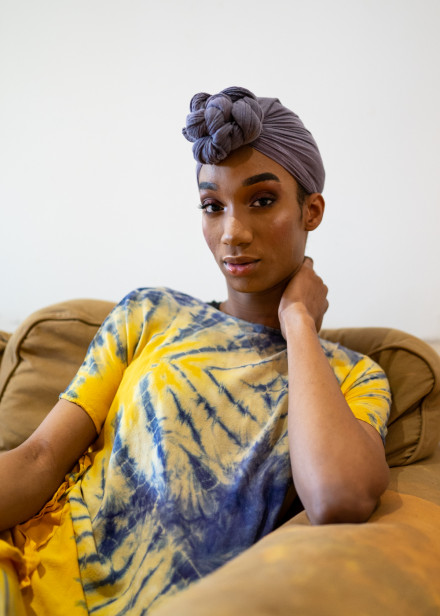 There is a great societal pressure that is forced onto trans women to appear as feminine as possible to be seen by their true gender. In our own community, there are ongoing silly debates as to whether or not you need hormone replacement therapy to be considered transgender, or whether or not you need gender dysphoria to be transgender in any way. The discussion shouldn’t be about who is and isn’t valid.

How about we discuss the fact that Black trans women have an average lifespan of 35 years? How about we mention the fact that we have a one in eight chance of getting murdered? How about we let the ones still living under roofs where mental oppression and physical violence are still rampant lead the conversation? 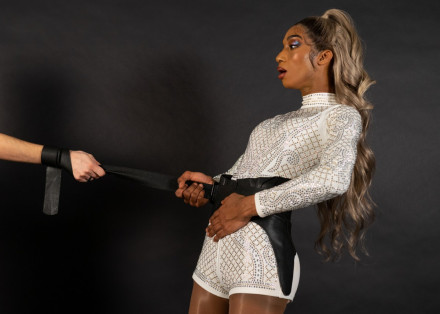 Adrienne often finds herself forced to go to extreme lengths to appear feminine and pass as a trans woman in the eye of the public. Photo Elisa Barbier

There are many more important things than the list of requirements needed to be trans invented by some blue egg on twitter.

Throughout history, the cries of trans women have been silenced and ignored, particularly those of Black ones. We have been called every name in the book. We have been pushed and poked and burned, but we keep fighting. And now, through all that life has thrown at me, at all of us, I keep holding on to that hope that one day, we will live in a world where none of this will matter.

But until that can come true, my fist will never come down. I continue to live my life free of all restraints, and I continue to fight so that everybody else can do so.