In the wake of Tuesday night’s victory over Curaçao, Canada proved to have some talent in their ranks ahead of the Gold Cup.

Kneeling on the touchline for most of the 90 minutes, head coach Octavio Zambrano and Les Rouges escaped Stade Saputo with a late winner, courtesy of Anthony Jackson-Hamel. The win—as Zambrano so fondly put—was the first in “defending the colours of Canada.”

“I would say a hard fought, but deserving victory,” said Zambrano. “Our guys came out and were a bit tentative at the beginning to find the right synchronization at the midfield. But once we did [I think] we preformed better. I’m very proud of the guys.”

It took some time for Canada to implement Zambrano’s attacking philosophy, but ultimately it was the youth that kicked the team into gear enroute to the win. Canada’s midfield displayed a calming presence in the first half, but forward Alphonso Davies’ inclusion at the 52nd minute in the second 45 minutes proved crucial.

At 16-years old, Zambrano’s decision to put on Davies marked a historic substitution becoming Canada’s youngest player to appear on the national setup.

“I just took a deep breath,” said Davies. “I thought about it like it was a regular game [and I] went out there and played.”

According to Montreal Impact midfielder Patrice Bernier—who after two weeks of speculation, donned the armband and lead Canada in his home city—Davies “brought a new life to the game.” 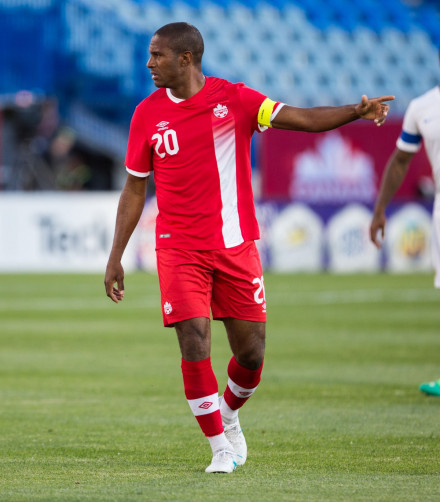 In addition, Bernier didn’t shy away to credit Davies for his performance, hailing the teenagers talents to succeed at the international level.

“At his age I was coming out of the World Cup under-17 and he’s in the men’s [senior] national team. ” said Bernier. “[…] so to see that a kid like that can come in and contribute that’s great.”

Canada included 12 players under the age of 23, including defensive midfielder Samuel Piette, who played a pivotal role in both of the team’s goals, as well as Jackson-Hamel, scoring the late winner.

“With the young guys, it’s simply about have the confidence to play,” said Bernier. “When they have that confidence, you see that they are capable of playing and creating opportunities and play attracting soccer.”

Zambrano also expressed his satisfaction with the team. The Ecuadorian native said the team is at the beginning of a process and is encouraged to see that Canada has a good group of players. “A group that could come in and make a difference in any given match,” he said.

Despite the influx of youth, the team’s veteran players will have to play a crucial role ushering in Canada’s new regime. Bernier stated that he told Zambrano, he wants to be part of the solution.

“There’s still work to do, but it’s promising,” said Bernier. “This is a team that you just have to mould and hope that they grow and bring Canada to the next step.”