Lifelong graffiti artist and skateboarder Sterling Downey used to say fuck the system, but now he’s set on changing it from the inside.

After doing municipal politics as a city councillor for Verdun with Projet Montreal since 2013, he’s determined to make a comeback this November for another round with the party that’s challenging Denis Coderre’s hold on mayor’s office. And while he may not be the most seasoned politician, he says his novelty gives him the upper hand.

“The only reason I’m still in the game is because I think we need some major change,” said Downey, Thursday morning in an interview with The Link at the Verdun skatepark he helped create in 2015. “In some cases, you have people who come from federal levels who have too much experience in politics, and who have forgotten about how to be close to the community.”

Before coming into politics, Downey would get into legal trouble for his love of graffiti, but constantly pushed back. “I was sued for a quarter of a million dollars in 1996 for vandalism, and I won the court case with my partners,” he says, while mentioning that he also helped create Montreal’s graffiti art festival Under Pressure, which has been running for 22 years.

In the past four years, he’s been known for his strides in making Montreal a friendlier place for skateboarders. In 2015, his efforts led to the construction of a $700,000 skatepark at Verdun’s boardwalk. Then in the same year, he convinced the city to change their bylaws so that skateboarders could use the city’s bike paths without getting ticketed.

As Projet Montreal’s spokesperson on homeless issues, he says he’ll continue his effort on improving the quality of life for Montreal’s homeless. If elected, he hopes to see a radical increase in the amount of money that’s currently being spent on funding homeless shelters and other organizations for homeless people.

In 2015, in a hope to get 2,000 people off the street by 2020, Coderre pledged to set aside $140,000 of funding per year for the next five years as part of the city’s Action Plan on Homelessness. But that’s negligible, Downey says, compared to the amount that Coderre was willing to put into Montreal’s 375th celebrations, which totalled $1 billion, and the amount spent on the Formula E electric car race, which was estimated at $24 million but whose actual cost is still unknown.

“People talk about how they’re doing so much, yet invest so little, and place value on other things that actually don’t have an impact on bettering the quality of people’s lives,” says Downey. 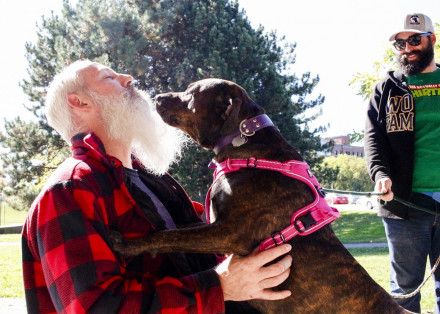 City councillor for Verdun, Sterling Downey, enjoying a sunny Thursday morning at the skatepark in the neighbourhood. Photo Ocean DeRouchie

He hopes to see more social housing in the city. Four years ago, lots near Hickson St. and Gaétan Laberge Blvd. by Verdun’s boardwalk were reserved for social housing projects, but the city put a freeze on the project because they said the cost of decontamination was too high. He says if Projet Montreal gets into office, costs like these won’t be seen as a burden.

Downey hopes to see the introduction of rooming apartments, where lower income people could rent rooms per week while at the same time receiving in-house services aimed at helping them.

“We’re not protecting rooming houses, and they’re the last option for a lot of people,” he says. “They’re the last stop before someone ends up on the street, when they lose everything, and sometimes, it’s the first doorway out of the street.”

He also hopes to see the opening of “wet shelters,” where homeless people would be allowed to spend the night regardless of whether or not they’re intoxicated. He added that he wants to see more dog-friendly homeless shelters. The only shelter that currently allows dogs is Dans la Rue’s day shelter.

Downey’s other focus is on getting rid of Montreal’s ban on so-called dangerous dogs. For him, it’s a fight that directly relates to Montreal’s homeless. Though unintentional, he argues the current law disproportionately targets homeless people since they often keep pit bulls as their companions.

To legally have a pit bull, owners need to have a fixed address and no criminal record. Those who are homeless might not reach that standard, and are likely to get fined as a result, he said.

Right now, Downey’s counting on the youth vote. When asked if he thinks more people will be coming out to vote this November, he admits he feel pessimistic. People tell him he’s bound to get back in, but he says that won’t happen unless people take the time to actually come out and vote.

“When I don’t get elected, we’re all fucked,” he says.