The Université de Montréal Carabins had everything going for them during the U Sports Men’s Soccer Championships. Defending national champions, in front of a raucous home crowd that included some of the Montreal Impact Ultras.

They were also fresh off a 2-0 win against the Université du Québec à Trois-Rivières Patriotes in the Réseau du sport étudiant du Québec final last Sunday.

However, league title winners and relative underdogs, the Patriotes brought their trademark feverish counterattack and an unflinching commitment to their gameplan.

Stunning everybody in what seemed to be an act of poetic irony, the Patriotes returned the favour with a convincing 2-0 win.

“From the start, we wanted to disrupt their buildup as much as possible and keep our [defensive] shape,” said defender and captain Jean-Simon Cournoyer.

“There’s an unbreakable chemistry between us and we had faith that we could win all games.”

In most finals, the start is slow and calculated. Neither team is willing to give an inch out of fear of being a goal down early and spends most of the beginning getting a feel for their opponent.

However, this was no ordinary final. From kickoff, the speed of the game was maddening. Both teams went for the jugular and each had two strong goal-scoring opportunities inside the first five minutes.

With teams trading chances, UdeM’s Guy-Frank Essomé-Panda broke away and was in all alone before being pulled down in the penalty area after only 25 minutes.

The stage was set for Omar Kreim to step up and put les Carabins ahead, only for him to skew the shot wide to the right, letting UQTR off the hook.

To add insult to injury, it only took four minutes for UQTR to punish UdeM’s missed opportunity. After a shot rattled against the crossbar, the ball fell to a wide-open Guillaume Comtois-Noel who passed it into the open net. 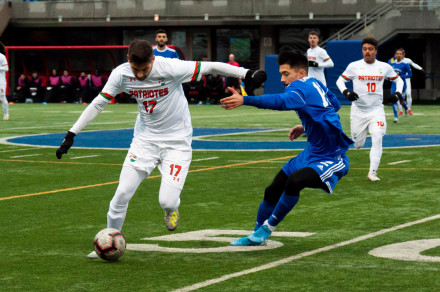 An endless back and forth filled with drama and suspense, the 2019-2020 U Sports Men’s Soccer Championship final was an instant classic. Photo Caroline Marsh

“There aren’t enough great things to say about this group of players,” said a euphoric UQTR head coach Shany Black.

“[Nationals] is something that we’ve had our eye on from the start of the season and we knew that we had the squad to go all the way.”

Not only did they go all the way, but they put on a defensive masterclass in the process. Through all three games played in the U Sports Championships, they didn’t concede a single goal and kept seven clean sheets out of 12 regular-season games.

The standout was none other than goalkeeper Félix Clapin-Girard who —while on his way to winning tournament MVP — was an absolute rock in between the goalposts.

“We’ve played them before so we knew that they could really make you suffer if you let up for even a moment,” said Clapin-Girard. “The entire team in front of me deserves this [MVP award] as much as I do.”

It was more than just a massive defensive effort that needed to be undertaken. For an hour, les Carabins relentlessly sent wave after wave of attackers, desperately looking for an equalizer.

However, UQTR seemed un-bothered with a punishing and composed backline with Corentin Artaillou anchoring the midfield.

“UdeM haven’t been shut out all season so when we scored early we knew that we would be in for a long hour of defending,” said Black. “But we knew that we were capable and the guys were incredible today.”

Another thing that was incredible was the sold-out CEPSUM’s atmosphere. Despite being overwhelmingly blue in support of the local Carabins, UQTR had a whole section of travelling fans equipped with flares, signs, masks, and what appeared to be an infinite amount of air in their lungs.

Not to be outdone, UdeM’s supporters were boosted by about 60 members of the Montreal Impact’s Ultras whose chants varied from cheering on their team to poking fun at UQTR and —as always—UQAM.

“The atmosphere was incredible today,” said Cournoyer, who played his last game in a Patriotes jersey. “We had a bunch of supporters make the trip and they performed as well as we did for the entire game.”

This caps off a season in which UQTR won their first RSEQ league title since 1995 on the way to claiming their first-ever men’s U Sports Championship title and securing the double.