Jenna McParland scored a hat trick to lead the Markham Thunder to a 4-1 victory over Les Canadiennes Saturday night at the Bell Sports Complex in Brossard.

The win, coupled with their 2-1 overtime win on Friday, gave the Thunder the series sweep over Montreal and secured their spot in next weekend’s Clarkson Cup final in Toronto.

“It’s been four years that I’ve been in the league and we’ve never made it,” said Thunder goaltender Erica Howe. “It’s just like [we’re] on top of the world. We played as a team and it’s the best kind of feeling.” 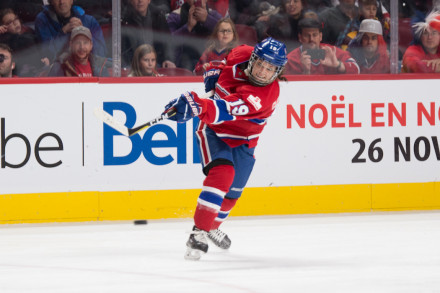 “Right now, we really want to take it in and celebrate,” she continued.

“It’s so much excitement and happiness,” said Thunder defender Jocelyne Larocque. “I know all those girls really well and I know how hard they work. I’m so happy and proud of them. To be a part of it is so special.”

While members of the Thunder were giddy with excitement, members of Les Canadiennes were distraught as they spoke of a premature exit from the playoffs.

“The whole series, it was a question of attitude and it came down to the details,” said Canadiennes head coach Dany Brunet. “Each small detail makes a huge difference in a series. Markham was the team with the most attitude and paid attention to those details.”

“We got outworked,” said Canadiennes forward Caroline Ouellette. “They just had this energy and it felt like they wanted it more than us. Our best player was [goaltender Emerance Maschmeyer.]”

Markham thought they got on the scoreboard just 54 seconds into the game. Thunder forward Jamie Lee Rattray found the back of the net, but the goal was quickly waived off by officials after it was determined she had gloved the puck into the net.

Les Canadiennes did take the lead with Devon Skeats of Markham in the box for tripping. Forward Sarah Lefort buried a rebound of a Cathy Chartrand blast from the point behind Thunder starter Erica Howe. Erin Ambrose also collected a helper on the goal.

The lead was short-lived, however, as just eighteen seconds later, the Thunder caught Les Canadiennes sleeping. Montreal goaltender Emerance Maschmeyer could not handle a Nicole Brown shot from the left boards. Sophie Brault then turned the puck over behind the net, with the puck coming to Jenna McParland in the slot, who beat Maschmeyer to tie the game up at one goal apiece.

“We lost our focus for a brief moment during the game,” said Canadiennes head coach Dany Brunet. “It was one moment too many. We had to be perfect. It made a difference in the game.”

The tides shifted in the third period, as Markham dictated play early on. Rattray rang a shot off the crossbar in the opening minutes of the frame. The Thunder also swarmed the Montreal net during a power-play. The puck came within inches of entering the net, but somehow stayed out.

McParland gave Markham the lead thanks to a wicked wrister from the face-off dot on the power play that eluded Maschmeyer. McParland would complete her hat-trick four minutes later, putting a dagger into Montreal’s chances of a comeback. Les Canadiennes did pull the goaltender for an extra attacker, but Rattray skated the puck into the abandoned cage to seal the deal.

“An underserved penalty got us in trouble,” said Ouellette. “They scored on the power-play. We tried to open up the game to create more chances. They’re a good team. They’re very fast and good in transition. At times, we struggled with their speed.”

The end for Ouellette?

Lauriane Rougeau had announced upon her comeback that she was persuaded by Ouellette to return to action following the Olympics as it might be her last season with the team. Ouellette remained mum when it came to her future with Les Canadiennes in the immediate aftermath of a painful loss.

“We’ll see,” said Ouellette. “I’ll take some time to think about it and see how it’s going to go.”

She admitted how difficult it was to return to game action mere months after giving birth to daughter Liv last fall.

“It was definitely harder than I thought,” said Ouellette. “It’s hard to find the speed back after you give birth. I have the utmost respect for the female athletes that have done it; Cheryl Pouder, Becky Kellar, Meaghan Mikkelson. It changes your body a lot and it changes your life.” 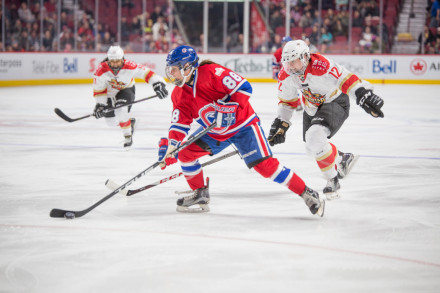 The Thunder will advance to the Clarkson Cup finals. File Photo Daren Zomerman

Ouellette has no regrets about her comeback and was happy to reunite with her Canadiennes family.

“I’m glad I did,” said Ouellette. “I had a lot of fun with the girls. We had a great group. Unfortunately, they (Markham) had that edge that we actually had last year.”

Markham did not let being the number four seed deter them on their quest for a spot in the Clarkson Cup final.

“I don’t think we were thinking about one and four (the seedings),” said McParland. “We were thinking, we beat Montreal before. We went into overtime a bunch of times and a shootout. We knew we could beat them and we did.”

After a slow start to the season which saw the team win three of its first twelve contests, Markham went on a veritable tear. They did not suffer a regulation loss since November 24. The team also got a boost with the return of Olympians Jocelyne Larocque, Laura Fortino and Laura Stacey. The mid-season arrival of American Megan Bozek also helped boost the team.

“Once we started turning it around, winning and playing as a team, you could feel the magic,” said Howe. “You could feel how we were coming together as a group. It’s a pretty special group in there.”

The Thunder now await the result of tomorrow night’s pivotal Game 3 between the Kunlun Red Star and the Calgary Inferno. The winner will face off against the Thunder next Sunday at Ricoh Coliseum in Toronto in a one game, winner-take-all Clarkson Cup final.