How a Hobby Became a Life-Time Passion for Corey Fleischer

On an average morning Corey Fleischer wakes up at 6 a.m., ready to receive his assignment for the day. Most days, he works until midnight.

“Honestly, this thing has kind of taken over my entire life,” he said. “I am severely addicted to the feeling of removing hate.”

Most people agree that hate against minorities and people of colour should be eradicated at all costs, but Fleischer goes about that fight a bit differently than most, since his main tool against hate is a high pressure power washer.

Fleischer has run his graffiti removal company Provincial Power Washing for the past decade, but only removed graffiti on commision. Life ran like that for him until eight years ago. Fleischer was driving along Monkland Ave. when he saw a spray painted swastika on a building. He kept moving along, but once he got to work, he said he had an epiphany.

“I knew that I did something terribly wrong, that I could have made a difference very easily and I didn’t.”

So he came back. “During the time that I was blasting away my first swastika—that feeling that I got from removing that swastika was something that I was searching for my whole life.”

“For a long time in my life, throughout high school and university, I was very lost,” he said. Recalling the moment, Fleischer describes experiencing an incredible bliss, and it was then he said he had discovered his life passion.

“I started driving all over the city, looking for anything hateful or demeaning to any minorities and that’s what I did, I did that for around five years, nobody knew except my family and close personal friends,” he said. “Everybody thought that I was crazy.” 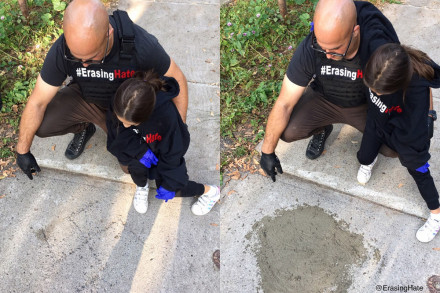 Fleischer estimates swastikas in the city take up 80 per cent of his work. Courtesy Corey Fleischer

In the past two to three years, the habit has developed into a full time job. Fleischer started posting before and after photos of his removals on his personal Facebook page, and from there, friends started calling and asking him to remove swastikas or other hateful messages in their neighbourhoods. Now it’s turned into a movement Fleischer dubs Erasing Hate.

Each day, Fleischer receives alerts from Montrealers through his public and private Facebook pages and through his Instagram page @erasinghate. If you give him a photo and address,“We’ll remove it within 24 to 48 hours,” he says.

In March, Fleischer removed a swastika off the Woman’s Y on René-Lévesque Blvd. that had been on the building for the past 25 years, according to a long-time employee he spoke to.

It’s not work that goes without any contention. Last summer, Fleischer got in trouble with the town of Pointe-des-Cascades in the Montérégie region of Quebec after he blasted away a painted swastika on top of an old anchor located in a historical site.

According to the plaque in the park, the anchor was likely left in the St. Lawrence River during the time of the Second World War. After Fleischer ignored the Mayor Gilles Santerre’s demands that he stop blasting away the paint on the anchor, Santerre called the police on him, and he was later charged with destruction of property.

To pay the bills, he still runs his graffiti removal company, but more and more, he says his push to eradicate hate leaves him with little time to dedicate to his job. Nearly everyday he power washes swastikas—he estimates they take up about 80 per cent of his work—and when he’s not doing that he’s giving anti-hate speeches at community centers, high schools, CEGEPs, and universities. Erasing hateful messages off of buildings won’t eradicate hate, he stresses—only education will.

“We have to educate our kids. So tomorrow, in our future, we won’t have to repeat the same mistakes we made in our past.”

Fleischer meets teenagers through schools around the city, and he often likes to bring them around while he scours the city for messages of hate. He says he wants to share the feeling he first experienced eight years ago with them, when he washed away a swastika for the first time, and he doesn’t only bring around young people. He also likes to bring Holocaust survivors with him on a day out.

Fleischer helps them collect statistics for their audit by sending them information about the number and locations of swastikas or related anti-Semitic messages in Canada, explained Harvey Levine, B’nai Brith’s Quebec regional director. When they get complaints from the community about offensive graffiti, they also notify Fleischer as soon as they can to make sure it gets removed.

“He knows how important it is to erase those swastikas, especially in an area where there are children in parks, or if there are Jewish people who are passing by who are very badly affected by the visions of the swastikas and the bad memories of World War II,” said Levine, who’s known Fleischer for five years.

Fleischer is helping to raise awareness about anti-Semitism in Canada, which is important since B’nai Brith found that anti-Semitic complaints have spiked in recent years. Levine couldn’t yet say what the statistics will reveal for this year’s audit that will come out soon, but said that unfortunately, “The numbers keep on increasing.”

With increased recognition in the city and the onslaught of interview requests from around the world, Fleischer’s work has extended well beyond the confines of the island.

More and more, Fleischer is facilitating the removal of hateful graffiti in cities around the world. If he gets a request in another city, he’ll first try to help by walking people through the removal process. If the graffiti demands more resources to be removed, he’ll call the city or police closest to the location, and if that doesn’t work, he fundraises through his networks to pay a graffiti removal company in the city to do it. He says he often pays out of pocket to make sure it’s done in a timely manner.

“We have tons of people around the world following this movement, I call them the erasing hate army,” he said. During one week at the beginning of March, he said 20 to 30 removals had been completed in cities around the world. It’s moving so fast that there’s even plans to roll out an Erasing Hate app.

“There should be a hundred Coreys,” said Levine. “If Marvel Comics was looking for another hero, they should make the erasing hate hero, because that’s who he is.”