Finding the Future of the Arctic in Lancaster Sound

Flowing from massive glaciers into the Arctic Ocean. Connecting the Davis Straight to the Northwest Passage, which itself connects the Atlantic and Pacific oceans. Freezing and thawing. Giving life to the plankton and fish and whales and birds that in turn feed the Inuit and their culture. Mined, and drilled, and trawled, but also protected.

These photos were taken over a week in August 2017, during the Students on Ice expedition. The reporter participated thanks to a sponsorship from Parks Canada. 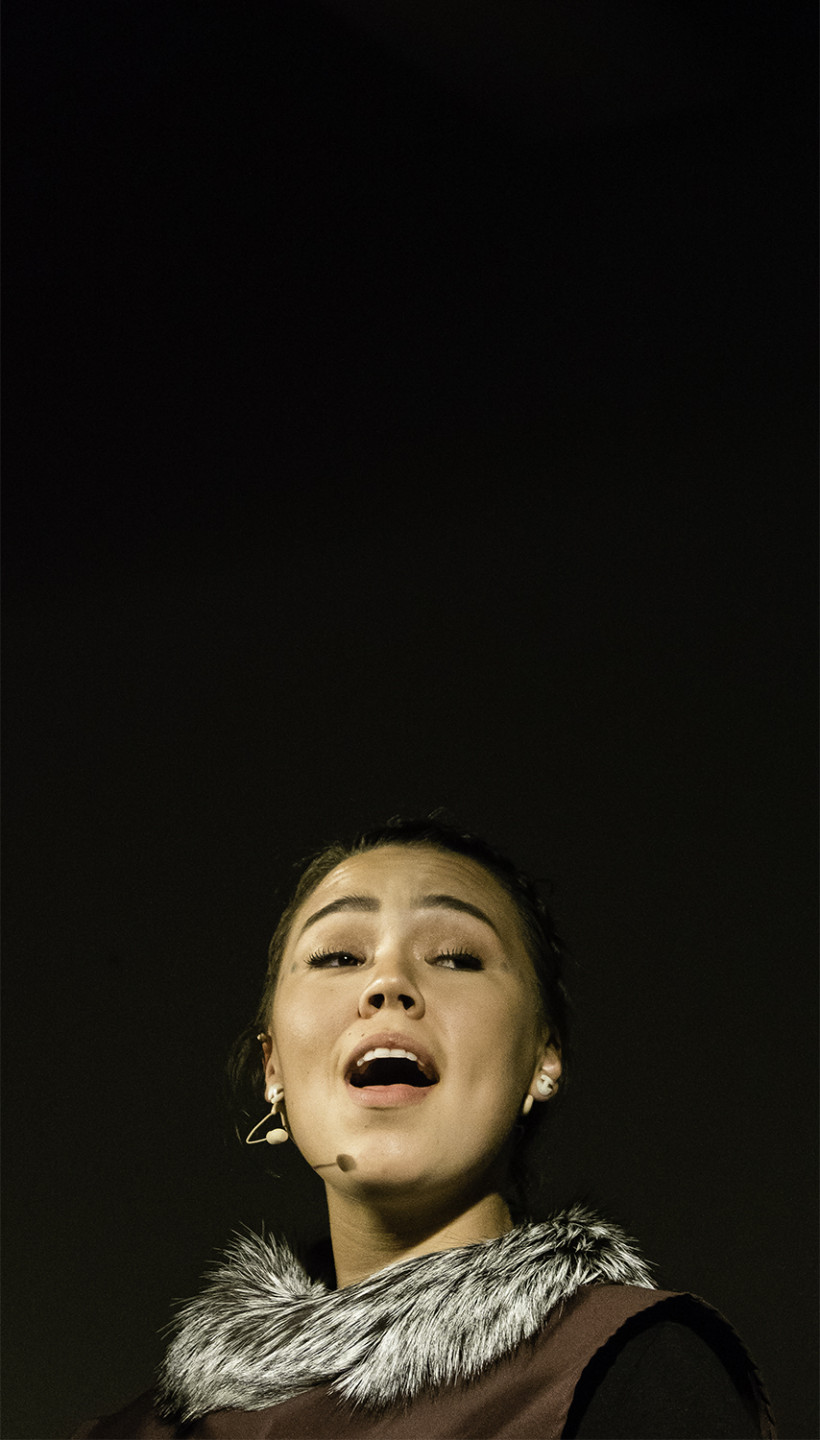 Natashia Allakariallak sings during the Tallurutiup Imanga National Marine Conservation Area announcement in Mittimattalik, or Pond Inlet. The exact details of how the massive conservation area will function depend on negotiations between local communities and government to create an Inuit Impact and Benefit Agreement. 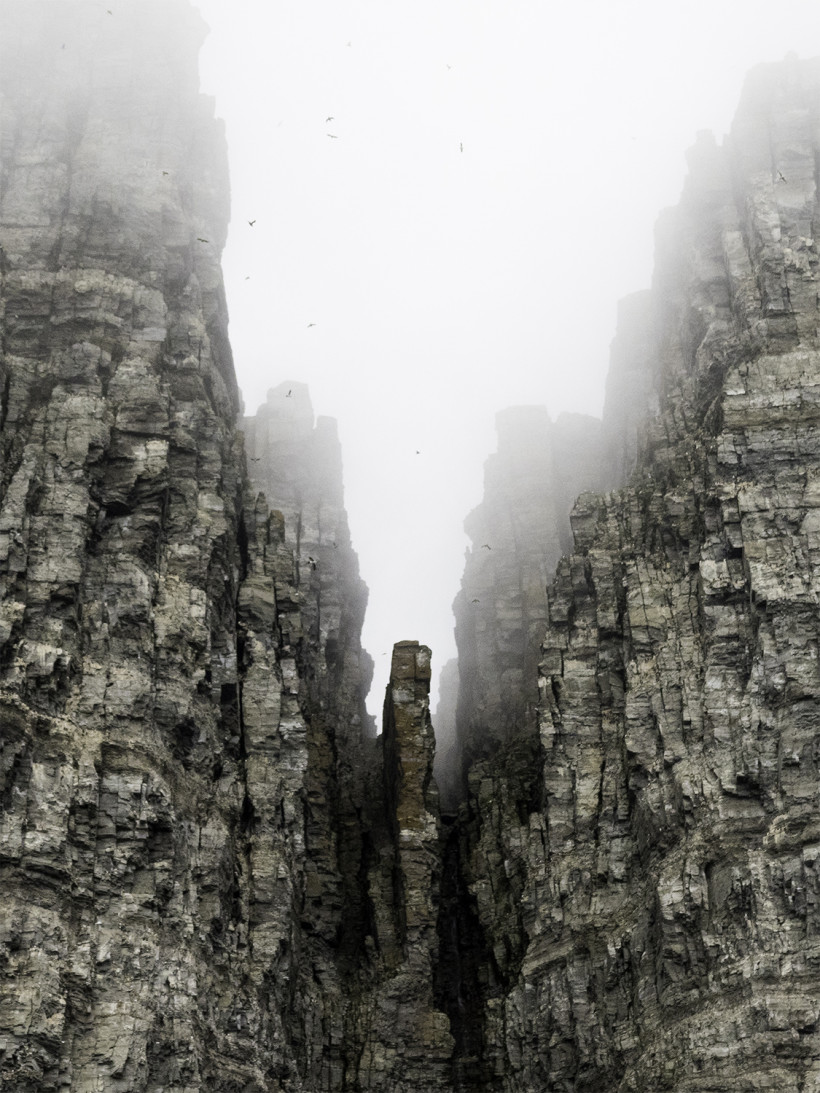 The otherworldly cliffs of Prince Leopold Island, west of Baffin Island. Battered by endless wind for millennia, the cracks and crags of this island house hundreds of thousands of seabirds. Species that are relegated to islands like this are especially vulnerable to habitat change brought on by global warming, which is strongest in the Arctic. The island is also a migratory bird sanctuary, one of several conservation areas whose waters will be wrapped into Tallurutiup Imanga NMCA. 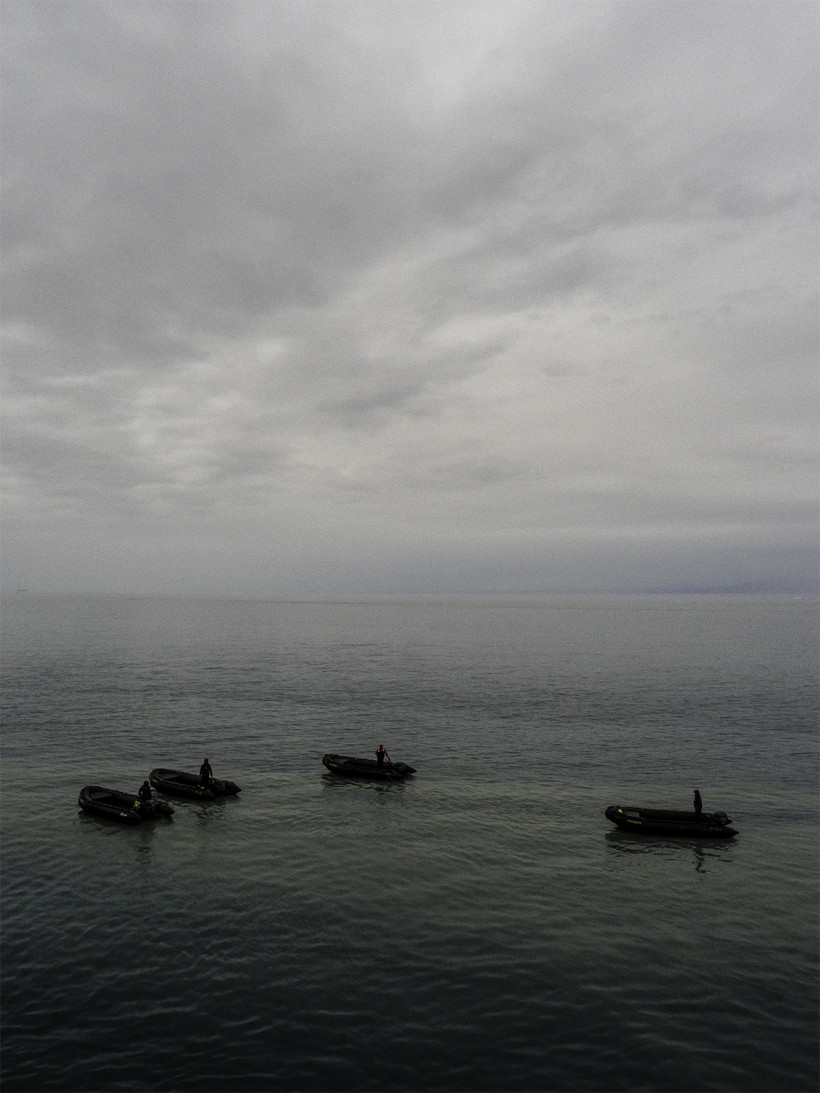 Zodiac boats hover on the sea, waiting to bring passengers ashore at Mittimattalik. Zodiacs are small, outboard-driven, utilitarian, ubiquitous rubber boats. There are no ports in Nunavut, so boats like Zodiacs are the only efficient way to get from ship to shore, or to navigate icebound passages. Kayaks, invented by the Inuit, originally filled the same versatile role. The knowledge of kayak construction was largely lost with colonial influence, forced settlement, and residential schooling, but is making a comeback. 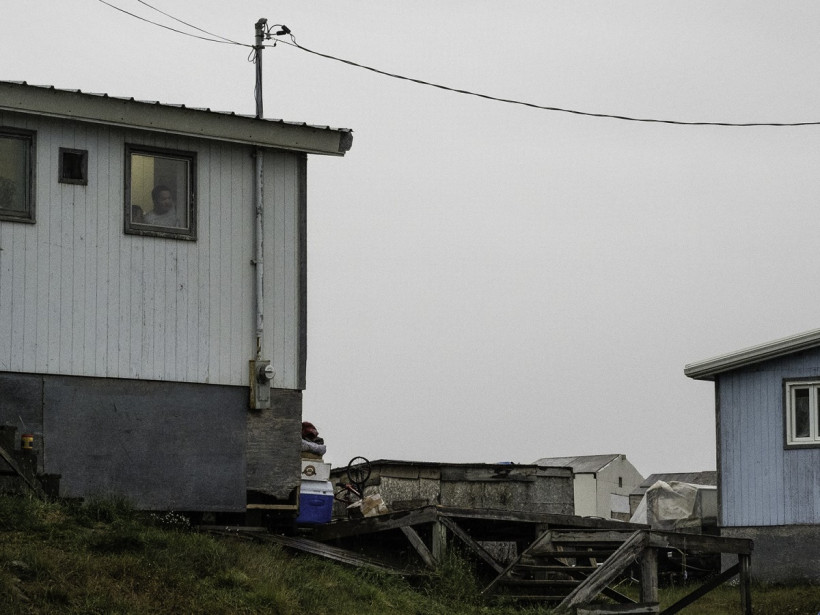 Two residents of Mittimattalik look out their window at the visitors arriving for the Tallurutiup Imanga announcement. Mittimattalik, just south of Bylot Island, is one of three Inuit communities whose waters will be included in the conservation area, along with Resolute and Arctic Bay. The increased resources dedicated to protecting these waters should ensure their health for traditional harvesting. The final Inuit Impact and Benefit Agreement could also give communities more leverage in dealing with big cruise companies and others who increasingly, and wantonly, use Inuit waters. 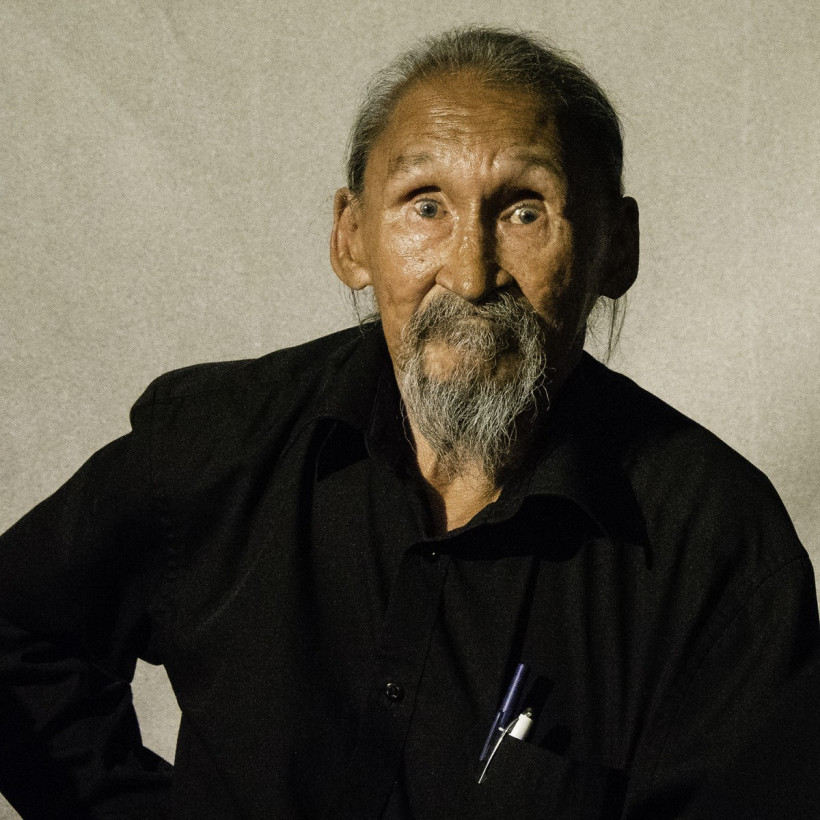 John Amagoalik, known as the “Father of Nunavut,” at the Tallurutiup Imanga announcement. Born in Nunavik, Amagoalik’s family was relocated to Resolute during the period of forced and coerced Inuit resettlement. Then, as a child, he attended residential schools. Later in life Amagoalik led the creation of the Nunavut Land Claims Agreement. That document carved Nunavut out of the N.W.T. and assured self-government. The NLCA is a major step in the continued push for trans-arctic Inuit sovereignty 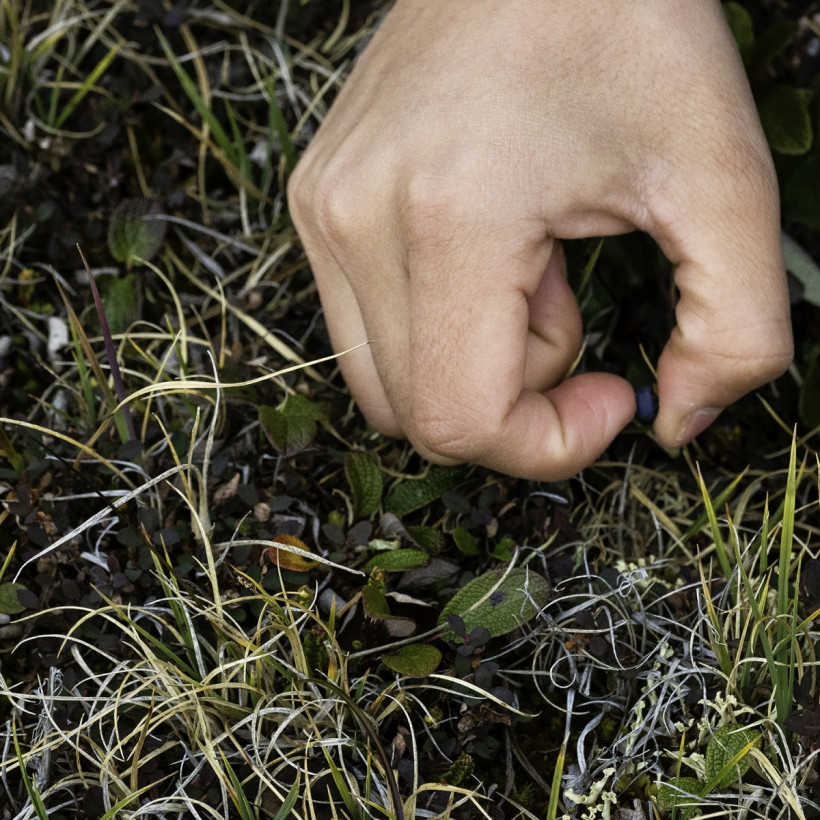 Biinia Chemnitz Frederiksen picks a wild blueberry on a hill at Kuukvik, Coutts Inlet, Baffin Island. Chemnitz Frederiksen is a young Greenlandic Inuk. The vast majority of Greenland’s population are Inuk and speak Greenlandic, a language very similar to Inuktitut. Greenland is largely sovereign from its Danish colonizer, controlling almost all policy except for defence. Greenlandic Inuit are working with other Inuit to regain traditions and identities lost over centuries of colonialism. Part of that process is teaching youth to live off the land, like harvesting the abundant edible plants of the Arctic for food and medicine. 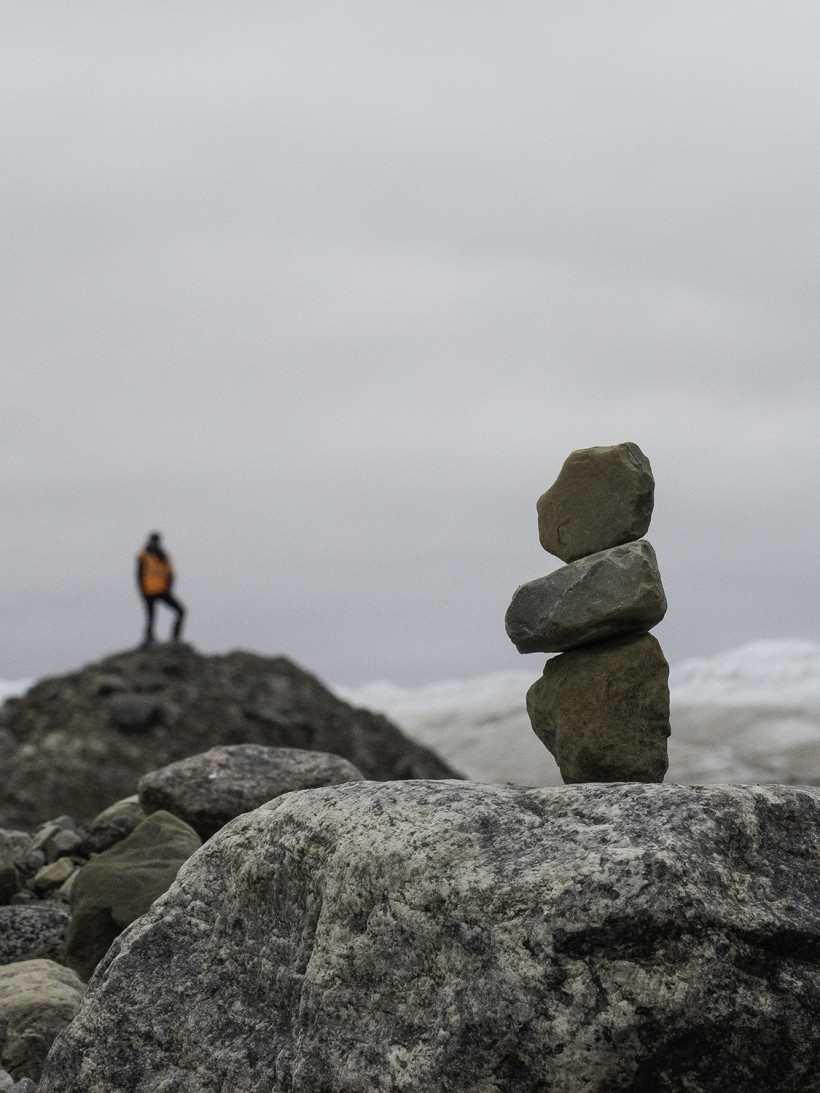 A bear guard and an inuksuk watch over the Croker Bay Glacier on Tallurutti, or Devon Island. Bear guards protect shore parties from polar bears, and protect polar bears from getting too close to groups of humans. Inuksuit have been used for thousands of years as markers of place, presence, and direction by the Inuit. They are still used today, left as reminders of those who walked the land, and staying as messages to those who will pass in the future.