Sayaspora, an African women-led organization, held the second installment of Cultures at the Ausgang Plaza on September 14.

Cultures is an event put on by Sayaspora for anyone looking to dance the night away to music from the African Diaspora. Sayaspora aims to promote a better image of African women and youth in the media. The event featured local artists No Kliché, DJ Trick Triick and DJ TYTY.

Founded in 2015, Sayaspora has its origins as an online forum where African women could share their experience of being in the diaspora. After some time, Sayaspora began hosting events including Diaspora Speaking which explores topics such as women of the diaspora and bridging the gap between the diaspora and those back home.

Cultures was born out of the need for a space where everyone could come together and celebrate their culture and all the accomplishments of the African diaspora.

In Montreal, it’s not like you can stroll into just any given bar on St. Laurent Blvd. and hear music from the African diaspora playing. But if you found yourself on St. Hubert St. on a Friday night, you might have just been lucky enough.

While the night started out relaxed, the place was quick to fill up. People shuffled in. Dance circles formed. The music brought increasing momentum to the crowd as the DJs took turns playing their sets.

“It’s something that didn’t exist in Montreal that exists elsewhere and we felt a void here,” explained Djamilla Toure, founder of Sayaspora and overseer of the event. Living previously in the Ivory Coast and Morocco, Toure noticed upon moving to Montreal that while the African community is diverse and plentiful, there is a lack of widespread appreciation of the culture.

“There wasn’t an event that aimed to share culture, to give a platform to these DJs, to celebrate the diaspora and every single person who came to celebrate it with us,” said Toure. 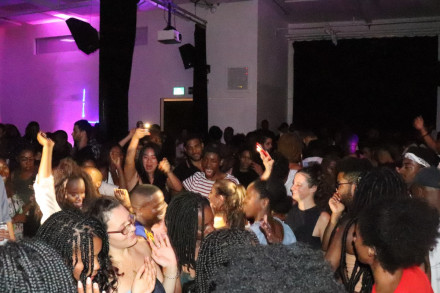 Cultures was not singular in the type of music it featured, nor was there just one view of Africa that was showcased. Photo Miles Norton

“It’s a very welcoming atmosphere because you have people from a bunch of different backgrounds,” said Pierrette Manege, a second year student in Women’s Studies at Concordia who frequents Sayaspora events. Manege likes how Cultures places an emphasis on diversity.

“It makes you feel more comfortable than going to other clubs that only play a certain kind of music,” Manege continued.

Cultures was not singular in the type of music it featured. Nor was there just one view of Africa that was showcased. It featured genres from all corners of the continent, from afro-beat, dancehall, mainstream hip-hop mixes, afro-house to old-school throwbacks. Whether you were looking to chill with friends at the bar or wait for the perfect beat to show off your gwara gwara, Cultures did not disappoint.

“It’s so much deeper than just listening to some Wizkid or Davido, that makes you vibe,” explained Toure. “There are so many stories and so much history behind music. Either it’s the lyrics, the sounds, the beats, where it comes from, the inspiration behind it.”

As the hours slipped by, people continued to pile in. The event found its peak at around 2 a.m. There was tangible energy and genuine excitement in the air.

There was also a sense of relief. This is a place where those living in the diaspora, and everyone really, can feel at home.

“I hope that this event will grow,” said Toure. Toure plans to continue Cultures sometime in the future; and possibly expanding the event into a festival that would include more artists and reach a broader audience.

For more information about Sayaspora, visit their website at http://sayaspora.com/en/