The Concordia Ski Club consider themselves a family, what with the extensive hours spent training in the gym and the two nights spent on the slopes together.

While being an inexperienced bunch, the members of the Ski Club still relish in the competition of the sport.

“Some of the members had never seen the inside of a gym when we started. They weren’t professional or athlete-leveI fit,” said coach Daren Ingrey, “It would be unrealistic to expect to challenge skiers who’ve spent hours training and been professionally competitive if you’ve never even really trained before.”

Despite not being a varsity sport, captain Alexandre Lachaîne made it clear that the team feels like the Stingers whenever they wear the maroon and gold racing in the Réseau du sport étudiant du Québec Ski Alpin competitions.

“I have a lot of friends in the club and I see them as my family,” said Lachaîne. “To be a part of a team and to be a Stinger is just the best. You’ll always be able to rely on these members and the Stinger family.”

While they may have placed last in the men’s, women’s and overall banners, Lachaîne feels the season was one of growth and success. The team finally has enough members to fill the 25 competition roster spots from the original 10-12 members who joined the team at the start of the season, and they now have a coach with extensive professional past. 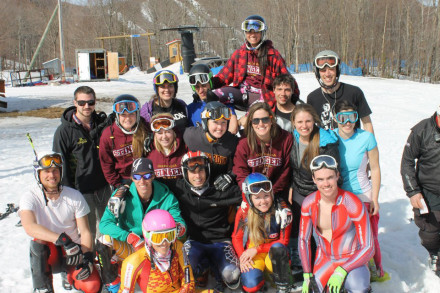 Unlike other ski teams within the RSEQ conference, the Concordia Stingers don’t have members with broad competitive experience. The other teams within the conference, notably Université de Laval and Université de Montréal, have members who were previously a part of the Quebec and Canadian national teams, and others who have even competed on professional European circuits.

Regardless of the team’s performance, Lachaîne said that the true victory comes from watching the development of some of the younger, more inexperienced skiers in the club.

“Stephanie Hawkins, who I just voted for Rookie of the Year, had never raced before and could barely get down the hill [at the beginning],” said Lachaîne. “But she was there every single night giving her all. She gave her best in every competition.”

Lachaîne is optimistic about the next season because the members now have gotten into a rhythm of training and have some racing experience.

“Members will have stepped up their ski level and will be more prepared. I think next year we’ll be more ready because we will be more familiar with everything,” he said.

“We accomplished a goal of introducing the sport to some people and introducing a healthy lifestyle,” said Ingrey. “It’s a great environment but it’s a more relaxed environment. We have fantastic students on the team with 4.0 GPAs. Skiing isn’t their main focus like some of the other competitions.”