Montreal “blue collar workers” dismantled a makeshift camp outside of the Champ-de-Mars metro station on Feb. 4, displacing five homeless people and disposing of many of their belongings, including blankets and sleeping bags.

This article has been updated.

The dismantling took place at approximately 11 a.m. near city hall on the corner of Gosford St. and St. Louis Street. Photos taken during the operation show that police officers from the Service de police de la Ville de Montréal were on site as a bulldozer cleared away items belonging to the camp’s dwellers.

According to Vincent Richer, chief of the SPVM’s Station 21, police received a complaint related to the use of narcotics at Champ-de-Mars metro on the morning of Feb. 4. Officers who arrived on the scene apparently determined that the complaint was related to the homeless camp at the station’s exit, and contacted the city’s blue collar workers to clear the area due to safety and security concerns.

Mayor Denis Coderre posted a tweet on Monday which aligned with Richer’s report:

“For security and hygiene reasons, there was a cleaning at Champ-de-Mars on February 4,” the tweet read. 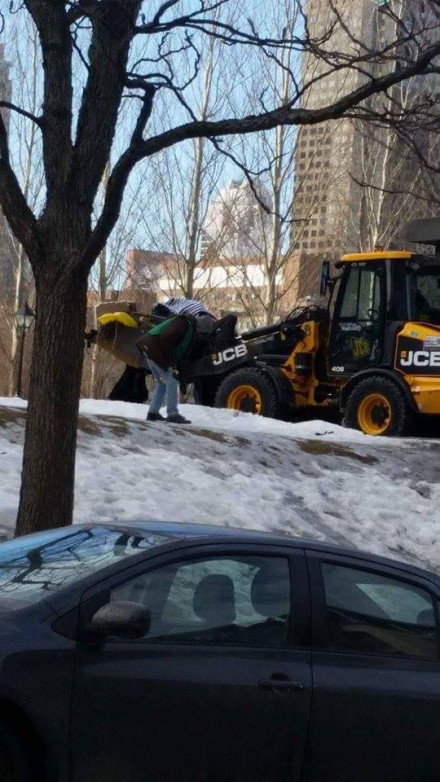 Scene of the dismantling. Photo courtesy of SOS Itinérance.

Richer explained that the people staying in the camp were given the opportunity to collect their personal belongings, but said that some items—such as sleeping bags—were left behind by the occupants and thrown out.

Alexandre Paradis, founder of the homeless advocacy group SOS Itinérance, is skeptical of this description of events. “That would surprise me,” Paradis said in an interview with The Link. “If I was sleeping outside in -20 degree weather, I wouldn’t leave my sleeping bag behind to be trashed.”

Paradis says his organization has spent a week trying to track down the individuals who were known to stay in the dismantled camp, along with any other homeless people who might have been caught in this past weekend’s extreme cold snap. He added that six people usually stayed in the Champ-de-Mars camp, although only five were present on Feb. 4.

“We go through the streets looking for as many people as possible, in order to direct them towards emergency warming stations,” Paradis said. “We’ve been out from 10 p.m. to 2 a.m. every night since Friday … we don’t want to leave a single person outdoors in that kind of cold.”

Paradis claimed that city officials did not contact any homeless organizations prior to the dismantling, despite assurances that the groups would be informed before such operations.

“Last year, Mayor Coderre made a pledge to communicate with us,” Paradis said. “But to empty a camp savagely like this shows a lack of coordination with our organizations.”

Richer of the SPVM said police did contact the homeless organization Acceuil Bonneau to advise them of the situation, but this was done after the camp was cleared.

Responding to police claims that the dismantling was related to drug use, Paradis said that, if such activity was indeed taking place, there were other ways to deal with the situation. “If they were using narcotics, why not call an organization that is accredited to deal with this type of behaviour to come talk to these homeless people,” he asked.

Paradis questioned the motivations behind the city’s dismantling of the homeless camp, and speculated that it may have been precipitated by the visit of United Nations Secretary-General Ban Ki-moon, who was in Montreal on Friday and Saturday as part of a Canadian visit.

“Was this done to clean up the image of city hall for Ban Ki-moon?” Paradis said. “He was going to be on the grounds of city hall—I believe it was done for this reason.”

City hall officials declined to comment and directed all questions toward the SPVM.