Thousands congregated on the lower field last Wednesday to commemorate 97 years since the end of the First World War, in a ceremony meant to honour those who never came home—a notion some argue is not inclusive to all victims of war.

Walid Fezza, a mathematics and economics student at Université de Montréal, was one of several Sigma Thêta Pi pledges handing out poppy pins to attendees as they entered through the Roddick Gates onto the ceremony grounds.

“Remembrance Day is a time to think about everyone who fought for our freedom and for our country,” said Fezza. 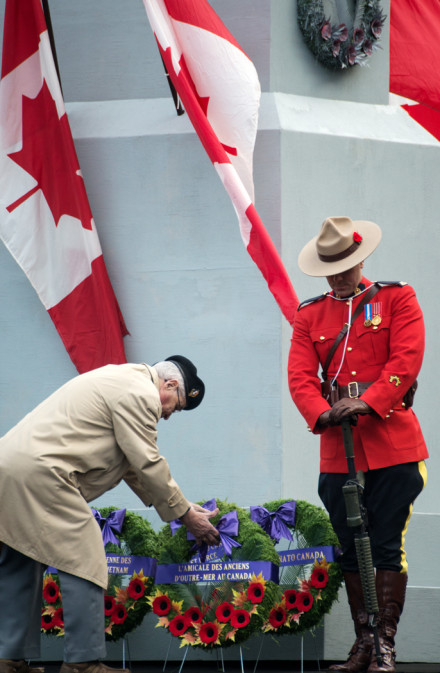 The crowd stood silently as military contingencies in full dress marched lockstep to the beat of a drum.

Daniel Whittle, a second-year history major at McGill appreciated that the ceremony is held on McGill campus. He said the ceremony is a good way for current cadets or people with military in their families to connect with the past.

However, not everyone was wearing a red poppy on Wednesday.

Several minutes before the traditional moment of silence at 11 a.m., a 50-foot banner began to unfurl from the roof of the Redpath Library.

The banner was quietly dropped by members of Reclaim Turtle Island, “an indigenous anti-colonial group,” and Demilitarize McGill, “a group that organizes to end military collaboration at McGill.”

Many people in the crowd gazed up at the banner in shock. One person could be heard screaming, “Get off the roof! Take it down!”

Mona Luxion, a member of Demilitarize McGill, and a PhD candidate at the university in Urban Planning, said that the banner drop “was meant to highlight who is being remembered on Remembrance Day, and to bring to light the fact that it is an inherently political day.

“You have military equipment there, you have helicopters flying overhead. It’s not really about past wars, it’s about present wars,” Luxion explained. “Canada is built on exploiting people here and abroad, and we can’t remember war without remembering who it’s against.”

Across the street from the Roddick Gates, metres away from a ceremonial cannon, a separate demonstration was being held by the anti-war group Le Collectif Échec à la Guerre.

Members of the group held a banner with a large peace sign emblazoned on it, and most members were wearing white poppy pins.

“The white poppies represent all the victims of war; including the military,” said Catherine Avard, an organizer with the collective.

At that moment, the cannon fired, shaking the windows of surrounding buildings.

“This celebration is not only for the people that had to fight in a war, but why they fought in it, and who they fought,” Avard said.

“This celebration is not only for the people that had to fight in a war, but why they fought in it, and who they fought.” — Catherine Avard, organizer Le Collectif Échec à la Guerre

“Remembrance Day is a day to remember the sacrifices that everyone has made,” said Larocque. “It doesn’t have to be a physical or mental sacrifice, but any hardship that was endured during military service.”
Larocque, a veteran who did tours in Afghanistan and Libya, noted the demonstrators to his left.

“War is not a pretty thing. As Canadians, I think we try and strive for peace everywhere in the world,” he said through several blasts from the cannon and a tandem helicopter fly-by.

The enormous military presence and artillery display purveyed different meanings to those in attendance. City Councillor of the Desmarchais-Crawford district Sterling Downey lingered on the lower field long after the ceremony was over.

“Those cannons … they are an interesting reminder. When those things go off, for us as civilians, you jump 10 feet,” said Downey. “And we’re not even being shelled.”

He spoke of how frightening it must be at war for the soldiers, and why these reminders are an important part of the Remembrance Day proceedings.

For others, according to Luxion, the cannons are a reminder of the terror and trauma of war. She said that the sound of gunfire and the sight of military uniforms is traumatic for certain students and faculty who have lived through war. She didn’t think that the ceremony has any place on McGill’s campus, and wanted people to think a little more about where there is a necessity for the celebration in the first place.

“Question what people have died for. We’re celebrating the people who have died, but what did they die for and how do we prevent that from happening again?” asked Luxion.

As the last of those in attendance shuffled back out through the Roddick Gates, a cadet collected discarded poppy pins on the ground.