After Increased Greening Efforts, is Parc-Extension at Risk?

Pull up a Google satellite image of the intersection at Jean Talon St. West and Acadie Blvd. On the southwest side in the Town of Mount Royal, you’ll see the houses are interspersed with lush vegetation. On the north side in Parc-Extension, the tightly packed apartments create a sea of grey.

Green space has not only been proven to help filter air, replenish groundwater and moderate temperatures, but has also been shown to improve the physical and mental wellbeing of city dwellers. But as is seen in Montreal’s satellite images, green space is not always divided equally between citizens.

“This is what we call social injustice,” said Simon Racine, the director of Vrac environnement, an organization that promotes green projects in the Villeray–Saint-Michel–Parc-Extension borough.

Over the past decade, the unequal distribution of green space in Montreal has increasingly been recognized as a social justice issue, and there has been a push, by groups like Vrac environnement, to increase the amount of green space in lower income neighbourhoods.

But with this shift comes a paradoxical question: Can the addition of green spaces uproot the very people it’s intended to help?

Sometimes it can. Green spaces make neighbourhoods more attractive and desirable. If this makes property values go up, lower income residents get priced out. That’s eco-gentrification in a nutshell.

Fred Burrill, a PhD student at Concordia University and anti-gentrification activist, said this pattern is complex and can manifest itself in a few different ways.

“There isn’t anything inherent to greening projects that says they have to be a tool of capitalist development,” said Burrill. “Where it becomes an issue is its use essentially by municipal governments as a motor for development.”

A classic example of this is the development along the Lachine Canal and the creation of the Woonerf Saint-Pierre in the Saint-Henri neighbourhood, an alleyway that was transformed into a “living” street and park in 2010. The $1.9 million project was originally pitched by the city as a way to reduce heat and improve circulation in the corridor by planting trees, but it has since become a hotbed of condo development.

“It generally had the effect of taking that space away from the people who inhabited it when it was industrial space, and transformed it into a place for the performance of excellent, fancy lifestyles,” said Burrill.

While cities may think they are improving the quality of life for people in the neighbourhood, in the long run this can prove problematic for low income residents of those neighbourhoods. Concordia professor and gentrification expert Peter Morden said this is often the case because city officials are more focused on economic gain.

“It’s a tricky question because there are multiple stakeholders in these kinds of issues,” said Morden. “Unfortunately local needs are often trumped by economic imperatives, much as we would like them not to be, particularly for those who are living in marginalized communities and without much of a political voice.”

These dynamics are now playing out in Parc-Extension. According to Racine, there’s a great need for green space in the neighbourhood.

“Parc-Ex has one of the lowest rates of green space per person in Montreal. The buildings are so tightly packed together and there’s not a lot of place for greenery, and when there is a vacant spot, its replaced by a condo,” he said.

In an attempt to improve this situation, in 2013, the city proposed 11 new parks in the districts of Marconi-Alexandra, Atlantic, Beaumont, and De Castelnau. One such park on De L’Épee Ave. was described in the city’s plans as “a new gateway to the neighbourhood.”

While the causality of eco-gentrification is at times difficult to show, it is evident that Parc-Ex is undergoing a transformation. With the new Université de Montréal campus set to open in 2019 and the recent sale of the Johnny Brown building to luxury apartment developers, a new gateway has been opened indeed. 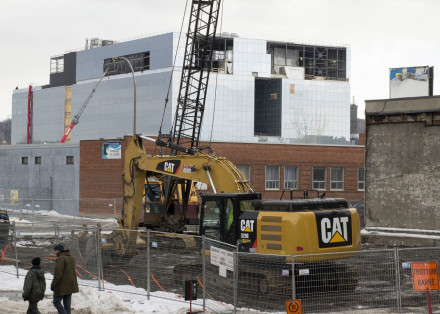 Construction began for a condo building at the corner of Outremont and Beaumount Avs. In the background, a new UdeM building is set to open in 2019, just at the southern border of the Parc-Extension borough. Photo Brian Lapuz.

“With all the new actors in the neighbourhood, and especially in a place like Parc-Ex, it’s kind of indicative of a certain white recolonization,” said Burrill. “The question that has to be asked is who are those things going to be for and why was it not public money’s priority when it was only poor people living there.”

All this is not to say that green spaces should not be implemented in lower income neighbourhoods; quite the opposite, Burril said. But when doing so, it’s important to find balance.

“The most effective thing the city could do in terms of greening and development, is to not use their greening powers as an incentive for condo developers,” said Burrill. “If a borough wants to invest massively in park development, that should be coupled with a moratorium on condo development and investment into social housing. It’s about balancing those priorities instead of leaving a lot up to private developers.”

With the new park expected at the corner of De L’Epée and Beaumont Aves., just across from the new campus, plans were put in place by the borough to make sure 120 units of social housing would move in a corner away on Querbes Ave. But last month, news broke that the building was sold to another developer. The loss of 120 units of social housing comes as another 21-unit condo building is planned to open this year just blocks away at 6900 Outremont Ave., despite the fact that 90 per cent of locals are renters.

To ensure that everyone in the neighbourhood has a say, both Morden and Burrill also stressed the importance of community involvement.

“Community buy-in and involvement is certainly a better way of public development than the top down development approach that is usually practiced,” Morden said.

For newcomers to a gentrifying neighbourhood, these concepts are important to remember. New homeowners may want to beautify their properties and surrounding areas, but according to Burrill, to really help the community in the long run, it’s important to listen.

“It’s not like people are doing something wrong, but like all aspects of urban change or development, it interacts with the underlying economic transformation of the neighbourhood,” said Burrill.

“Get to know your neighbours and see what they’re doing. Arrive in listening mode rather than arrive as the innovator.”

Like any investment in a low rent neighbourhood, creating new green spaces risks attracting stakeholders who want to reap the benefits of inexpensive property. Burrill said that to counteract this, and to bring actual benefit to communities of these neighbourhoods, those partaking in green projects must ultimately remember who the spaces are meant for.

“I think the only way for any project to avoid playing into that dynamic, not just green projects, but any social or cultural innovation, is to also be a project that is actively working against gentrification,” said Burrill. “That has to be part of it, otherwise you just get eaten up in that machine.”