Black Artists Express their Identity Through their Work

The beginning of February marked the first days of Black History Month, but it also marked the opening night of Symbols of Resistance, a residency project and art show about Black art by Black artists.

The project stemmed from the lack of professional opportunities and resources experienced by many Black visual artists in Montreal.

“We were thinking about how we could address this ourselves, and we decided that maybe a residency could work as an opportunity,” said Annick Maugile Flavien, Outreach Coordinator of Critical Feminist Activism Research and organizer of the project.

Along with Megan Gagliardi, Maugile Flavien created the Montreal Black artist-in-community residency. This is a 15-week project during which select artists were provided a space to create personal pieces based on their own experiences as young Black artists living in Montreal. It was crucial for the organizers that the artists received adequate resources to sustain their work.

A call for emerging and experienced Black artists in the city was posted in October. Within a few weeks, over two dozen applicants responded.

“All of the artists and all of their stories were extremely rich, but it really became about what the team would look like and not about whether one person was better than another,” stated Maugile Flavien.

After 11 weeks of emotional and physical dedication, the residency transpired into a month-long exhibition at the Ame-Art Select, a gallery in the Mile-End.

Opening night on Feb. 1, the laughter echoed throughout the room while delicious wine aromas were floating in the air. The full house made it difficult to move around in the dense space, and the excitement was palpable.

The positive turnout was indicative of the enthusiasm felt by the community and the potential of this project. In rawness and genuine emotion, the eight joyful artists opened themselves up to allow visitors into their personal motivations, hopes, and worlds.

In her pieces, Nau used wood to accentuate the skin of her comic book-like characters. Endless symbols representing different facets of her identity are integrated into her work. “I hope it sparks a conversation about how queerness, disability, natural hair, and Blackness in itself is perceived in society,” she added.

Wood is also the base of Monie’s multiple self-portraits called “Crowning.”

“I used wood because I discovered that head wraps are so tied to Black bodies and wood is a natural fibre, so to me, headwraps are natural to the black body,” she said. 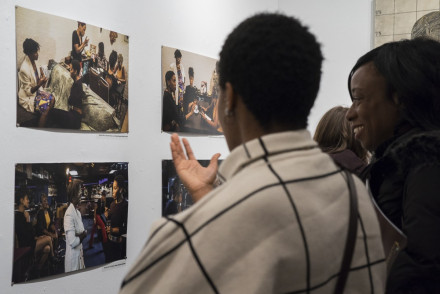 Photos by Carl-Phillippe Simonise, exploring the representation of Black individuals in the 1980s in Quebec.  Photo Elisa Barbier

Monie wanted to rediscover the correlation between the tradition of these colourful fabrics and the Black women who have worn them for centuries. Although her work is deeply rooted in her own identity as an African woman, Monie wanted to ensure that any Black person could recognize themselves in her piece.

“I want other Black people to see themselves within it, and blacking out my eyes really removes my soul from the art,” she explained. As an extension of her visual experiment, she decided to wear a head scarf every day for the entire month of February.

Next to Monie’s pieces, are Glowzi’s large double self-portraits on a soft pink background.

“What I wanted to represent is that even though we’re not all Beyoncé or direct victims of police brutality, as Trayvon Martin or other unfortunate people who have died, our experiences are still important,” she said. ”So, the idea [behind] my piece was to reclaim the place of ordinary Black folks.”

The white lines painted on her face, she explained, symbolized having grown up in Montreal, surrounded by a white media’s representation of Black people and the influence it has had on her youth.

Diallo’s digital drawings on canvas are the three pieces on the right-hand side of the entrance door, each characterizes a part of Black women’s identity. The one closest to the door, called “The Vessel,” is a mother holding her baby. It represents the power of intergenerational relationships of Black mothers with their own children, but also with others’ children.

The middle one, “The Crown” is embedded in cultural codes of Black origins and pride. The third canvas depicts two women locked in an embrace; one is facing forward, while the other one is facing backwards. By doing so, Diallo wanted to emphasize mutual support and understanding.

Diagonally across the gallery’s entrance, a series of photos are framed next to one another along the wall. On an adjacent shelf, a vintage photo album features a collection of pictures seemingly taken in the 1980s.

“Montreal, 1985” was created by Bah, Lomami, and Simonise. Through extensive research, the trio found that Montreal’s public archives showing Black people in the 1980s were almost nonexistent.

They decided to fill this lack of representation by recreating what could have been the life of a group of Black friends and activists in the 80s. With the information that they gathered, they decided to stage a scene from 1985, in an NGD apartment and at the famous Balattou Nightclub, which had recently opened during that time.

Lastly, Valmé usually expresses herself through music, but for this residency, she decided to connect her inner self with visual art.

“My work here is an introspective exploration, essentially based on an emotional congestion which I carry around, much like all humans on this earth,” she stated about her work. To do that, she decided to divide this “congestion” into three dimensions: the emotional, the physical, and the spiritual.

“This forced me to do an introspective scan on facets of my reality and identity,” she added.

During the exhibition, other events will be taking place at the gallery. On Sunday, Feb. 18, the gallery will be turned into a kid-friendly space where they too will be able to engage with the artwork on a deeper level, with the help of facilitators.

Also, on Feb. 24 to 25, the public is invited to support and discover the work of various local Black artists at the Black Maker’s fair. Finally, on Feb. 26, the team invites the public to the “Finissage” to celebrate the end of the exhibition.

After the end of the exhibition on Feb. 28, the artwork will be going on a year-long tour through various Montreal community centres. The organizers hope that these conversations go on further than Black History Month and create more long-term opportunities for Black artists.

Vernissage: Symblols of Resistance // Going on until the end of February // Ame-Art Select (5345 Parc Ave.)