Nearly three decades have passed since the Montreal Massacre at École Polytechnique in 1989, but Dec. 6 still weighs heavily upon the city.

On that day, Marc Lépine walked into the Montreal engineering school with a high-powered rifle and shot 28 people, killing 14 women before turning the gun on himself. His apparent motives were linked to grievances he felt against women and feminists in particular.

Dec. 6, 2017, marked the 28th anniversary of Canada’s worst mass shooting in history. Tearful family members, students and Montrealers paid their respect at the short Wednesday morning ceremony, placing white roses at the base of a plaque commemorating the victims.

Michèle Thibodeau-DeGuire, Chair of the Polytechnique’s board of directors, said the day always seems like any other as students and teachers stayed busy with classes and work.

“It’s quiet,” said Thibodeau-DeGuire. “But we know it’s December 6, let me put it that way.”

Later on in the evening more people gathered at the lookout on Mont-Royal to watch the fourth annual lighting of the beacons to commemorate those who died. Montreal Mayor Valérie Plante, Quebec Deputy Minister Dominique Anglade and Sophie Grégoire Trudeau, the wife of Prime Minister Justin Trudeau, were all in attendance along with engineering and student association representatives.

After a brief introduction, Blanche Mageau-Béland, the vice-president of Polytechnique’s students association, read out the victims’ names one by one.

As each name was called one spotlight would turn on behind her until all 14 joined together to form a cone of light high above Montreal, followed by a moment of silence. 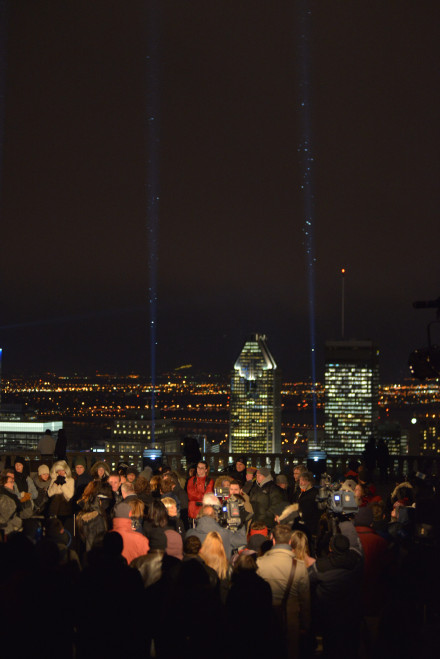 Romain Gayet, a member of the Comité mémoire that organizes the event, said the ceremony, now in its fourth year, is welcomed by hundreds of people coming to pay their respect.

“People recognize how important it is to hold on to the memory of those victims,” said Gayet. “It is that one place, that one moment that we can all remember together.”

And that memory does not seem as if it will be fading anytime soon. The ceremony always brings plenty of students from around Montreal, said Gayet, most of whom that weren’t who weren’t alive to remember the day.

Jessica Davidson is one of those students. As a McGill student from out of town, she sees it as an important way to get involved with the community and show your support for the victims’ families and the city.

“It’s a way to engage with what’s happening in the city and it’s important to be a part of events like this to support them,” said Davidson.

The ceremonies, however, have never just been about remembering those who died, but also about the status of women within in society and the injustice and violence they face everyday.

In light of all the recent allegations of sexual harassment against women by men in positions of power, that second point seems all the more relevant.

For Thibodeau-DeGuire, who is also the first female to graduate from the civil engineering program at the Polytechnique, things have changed quite a bit since she was one of only four female students at the school. However, she believes there is still a long way to go and the ceremonies are an opportunity for a broader conversation about how women and girls are treated.

“We have to make sure that girls feel that they belong and they have a place to offer their perspective,” said Thibodeau-DeGuire.

Despite initial tensions caused by a pro-gun lobby planning and subsequently cancelling a rally meant to take place at the site of the memorial on the same day, the ceremonies went smoothly with the only unexpected excitement being a dusting of snow passing through the beams of light.