Of the Réseau du sport étudiant du Québec’s five most productive women’s hockey players, the league champion Concordia Stingers had three of them.

Included in those three players was first-year forward Lidia Fillion, who was named the RSEQ’s rookie of the year for her performance in the regular season. Her 17 points, ten goals and seven assists were all tops amongst RSEQ rookies this year. For scale, McGill forward Kellyane Lecours was the second most productive rookie with only 11 points.

“I just think I have the vision,” said Fillion. “When I play with the girls, my teammates, I’m in the good spot and when I have the puck, I have the instinct.”

Bringing in and quickly developing high-end talent is becoming par for head coach Julie Chu’s course. Forwards Claudia Dubois and Audrey Belzile were the other two Stingers in the top five, and they’re both players who have steadily improved in the three years since Chu took over the program.

“She’s a great player for us,” said Chu. “She was coming off being a captain and a tremendous player at [cegep] Saint-Laurent and we knew she’d do a great job for us here.”

Chu went on to say that it took a while for Fillion to find her stride at the university level. But she says that her work ethic, attitude as a teammate and her commitment to improving helped her become the most productive rookie in the league.

“She’s a recruit and she was awesome,” said Belzile. “She came in and she was ready to learn.”

As a young player herself, Belzile testified to the fact that the Stingers have a good cast of veterans on their roster for young players to emulate and lean on for advice as they develop. 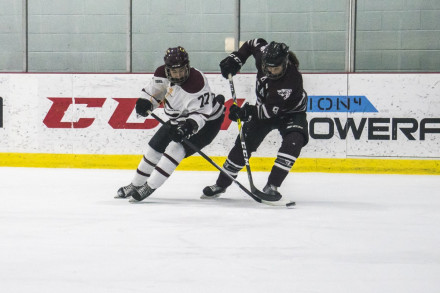 Fillion’s season embodies that as she saw her production explode in the second half of the season. She had a 12-point outburst down the stretch of the season after recording only five in the first half.

“It took me, like, maybe a month to realize that ‘Ok, yeah, maybe it’s more quick and the play comes earlier,’ but after that, it was ok,” said Fillion.

Fillion joins three other Stingers to have taken home RSEQ honours. Dubois and Bezile were named second-team all-stars while defender and team captain Marie-Joëlle Allard was named to the first team. For Chu, however, it’s all about the collective.

“For us, the all-star honours are always interesting,” said Chu. “Even though it’s an individual award, we really do believe it’s a team effort that allows those individuals to excel and it’s really a compliment to our team as a whole.”

Still, Fillion is happy with the feat, especially since she didn’t expect to win it. She is the first Stinger to receive the award since goalie Katherine Purchase won it in 2014-15.

“It just came and I was super happy,” said Fillion. “I’m very proud of it, and I didn’t expect it at all.”

Moving forward, her attention is fixed on nationals. Fillion wasn’t as productive in the playoffs as she was during the regular season, and is hoping to redeem herself.

“I’ll try to do my best, every shift I have I will do my best,” said Fillion. “I will try to score for sure, and just try to win my battles and bring the puck to the net.”

Their quest for a national title begins Friday at 7 p.m. against the Saint Francis Xavier University X-Women at Thompson Arena on the campus of the University of Western Ontario in London, Ontario.

With files from Dustin Kagan-Fleming.