‘Encore’ Offers a Look Into the Universal Nature of Couples

“When you’re in a couple, what do you forget about each other while you spend years together?” said Mathieu Murphy-Perron, artistic and executive director of Tableau D’Hôte Theatre.

A man in a grey-brown tuxedo walked on stage, looking confused and a little bit lost. To his right sat a woman, nursing a glass of wine in one hand and a book in the other. She looked up at him.

“And what does she look like?” asked the woman.

“Well, she is very beautiful,” answered the man as he turned towards her. Their eyes locked, a smile emerged between the two. And thus starts Encore‘s hour and a half run.

A two-person play featuring local actors Matthew Kabwe as Sir, and Tania Kontoyanni as Madame, Encore tells the story of a young couple “in the throes of young love” as they reenact the scene of their very first meeting, over and over again over the course of 50 years.

Sometimes a battle between their contrasting personalities, Encore is imbued with comedic charm as the two characters attempt to woo each other, oftentimes getting on each others nerves in ways only a lover would know how to do.

Each year, they return to the same place to reenact their initial meeting in a script written by Madame, inspired by their very first meeting. To them, this reenactment is what sets them apart from the other couples, giving them that special something that will make their love outlast the test of time.

“I’ve had great loves in my life, and horrible breakups, and all of the joy and the pain that comes with all kinds of relationships, and yeah, we all struggle. And I think that’s why the play works.” — Matthew Kabwe

Their script is poetic and sweet, but a larger theme looms overhead. What is it that is truly necessary in order to keep a relationship green, growing, and nurtured enough to withstand the test of time? Is it as simple as a script written and recited once a year, or is it deeper calling?

“To love and be loved takes work and surrender, not acceptance or giving up,” stated director Liz Valdez in Encore‘s program.

It was after her grandparents’ passing that she stumbled upon the play, written by Marc Prescott. “This reminded me of how my grandparents loved each other and their family. Not the emotion, but the acts of love,” stated Valdez in the program.

Valdez and the set designers worked to create an atmosphere that provokes a sense of timelessness. “For our set designer, it was really about distortion and repetition,” explained Murphy-Perron.

The stage is set with white door frames, each smaller than the next, falling into each other like puzzle pieces. They seem like doors to another dimension.

The play ties digital imagery and violin music with images and words that are projected during the break between scenes. During these lapses, the two characters peeled back a layer of the set, moving the door frame to the side to reveal another one underneath it, as though they were turning the page of a book.

Though the time jumps ahead five, 10, 20, and 50 years into the future, the place is always the same.

As the scenes unfolded, so too did the couple’s hardships and difficulties. Each time the characters come back on stage for another enactment of their meeting, the exchange is different, filled with a new energy that highlights the couple’s newest tribulations. 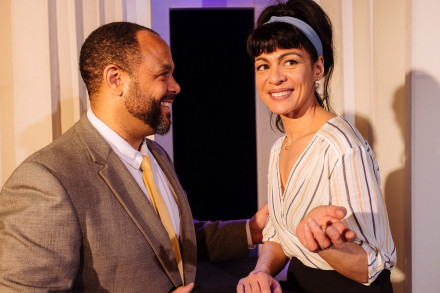 The couple returns each year to the same place to reenact their initial meeting. Courtesy Jaclyn Turner

“I’ve had great loves in my life, and horrible breakups, and all of the joy and the pain that comes with all kinds of relationships, and yeah, we all struggle. And I think that’s why the play works,” said Kabwe.

This vagueness of the set design and of the characters is intentional, according to the actor.

“I think the reason that the characters don’t have names is because there’s a bit of everyone in every relationship in these two characters,” Kabwe explained. “I haven’t spoken to a single person yet who hasn’t identified with some part of the play, sort of very deeply.”

By the final scene, the audience has witnessed the couple go through a separation, later re-igniting their flame in a final scene which shows Sir suffering from memory loss as Madame helps him remember his lines from their re-enactment. The ending is somber and sad, filled with as much love as there is inevitable loss—of time, of experience, of memory.

Life, and love, isn’t always so simple. The characters are invested in being in love, but not always invested with actively loving each other—and this is where the play hits its raw and poignant truth.

“ Encore is a story that urges us to remember that love is not simply an emotion, but also an act,” Murphy-Perron said. “You need to commit to it, work to it. Once you start just letting it happen, it’s going to start meaning less to those people who you are actively engaged in the act of loving.”

This is what makes Encore so fresh to watch—its realism, and the truth it shares about the nature of relationships. There are complications, and tiny details that don’t matter, until they do. The complexity, and the sublime nature of a thunderous love that threatens to destroy everything.

“ Encore is a reminder that we need to act our love,” said Murphy-Perron.

The play will run until May 19 at the Mainline theatre.